Canada’s longest-running sport recognition event is back, and on the heels of an amazing Olympic and Paralympic Games Sport BC is excited to honour BC’s best athletes, coaches and officials in 18 different categories. See who will follow in the footsteps of Steve Nash, Rick Hansen, and Maëlle Ricker as Athlete of the Year Award winners.

The 51st Annual Sport BC Athlete of the Year Awards will be held March 8, 2017 and British Columbia Golf is proud to announce the nomination of Coquitlam's AJ Ewart, a student of Gleneagle Secondary School, as Junior Male Athlete of the Year.

Ewart was the CJGA BC Junior Open Champion and also took medallist honours at a U.S. Junior Boys Amateur qualifying event held at the RMG Club at The Classic Golf Club in Spanaway, Washington on June 21st.

On top of that his high school golf team from Gleneagle Secondary won the AAA B.C. High Shool Golf Championship aided tremendously by Ewart's rounds of 66, 68 for a 6-under par total and the runner-up spot in the individual competition.

He also recorded a couple of outstanding performances in the BC Men's Amateur and the BC Junior Boys Championship, finishing 2nd in both events, missing a playoff in the Junior Championship by one shot after 4 rounds including a sparking 2nd round of 6-under 64.

Finishing the year as the number one ranked Junior not only in BC but all of Canada, Ewart is embarking on his 2nd year as a member of Golf Canada's National Developement Squad. 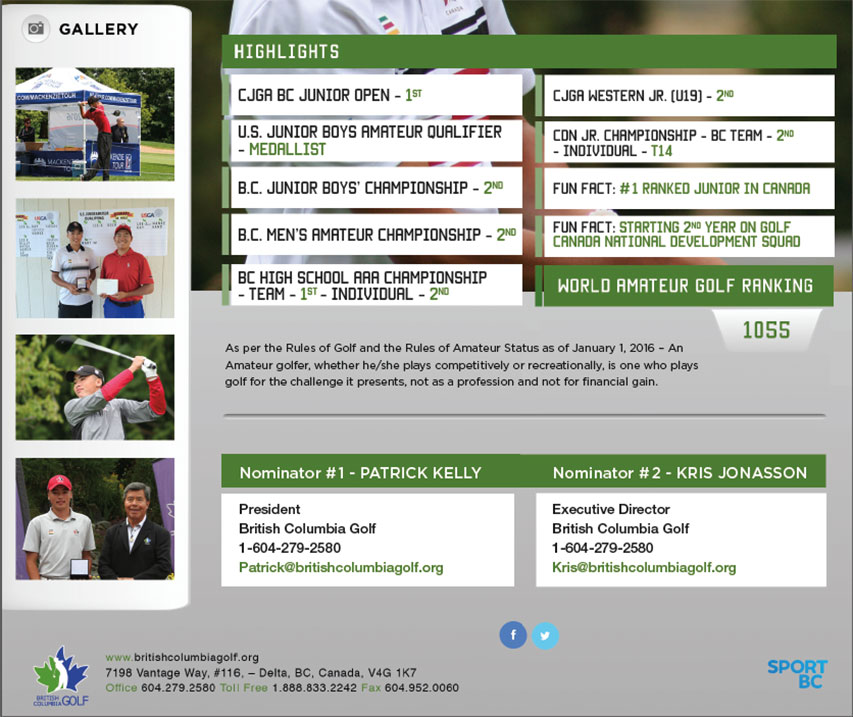