Sihota Leads BC Juvenile Boys By One, Lee & Hayashi Tied Atop Juvenile Girls 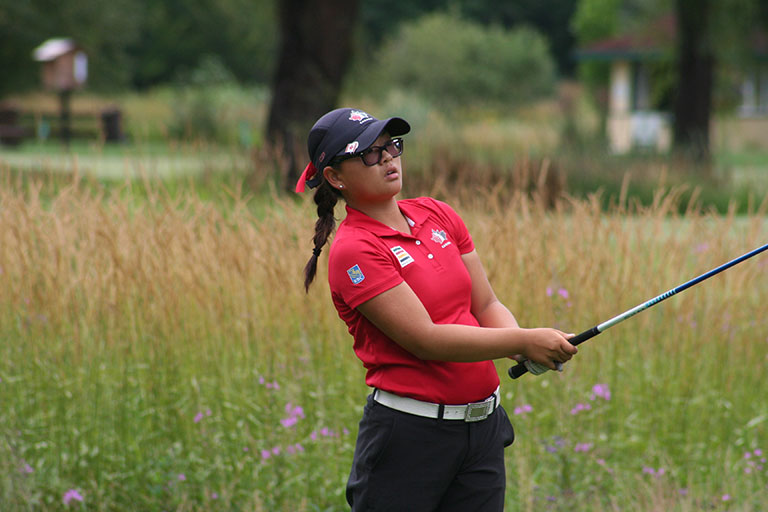 After 36 holes at the 2016 BC Juvenile Championships Victoria's Jeevan Sihota sits at 3-under par and leads the Boy's competition by one shot over Vancouver's Ilirian Zalli with another Victoria resident, current BC Amateur Champion Nolan Thoroughgood just one shot further back along with fellow Vancouver Islander, Aidan Goodfellow of Parksville.

The Girls Division has Surrey's Hannah Lee tied at the top of the leaderboard with 13-year old Akari Hayashi from Victoria's Uplands GC. The final round is slated for tomorrow starting at 9:30am with the leaders teeing off at 1:10pm at the scenic and challenging Chilliwack Golf Club.

Sihota, who plays out of Gorge Vale GC in Victoria, followed up his opening round 71 with a solid 2-under 70 that included 4 birdies and 2 bogies. Sihota bogied his first hole of the day, the 10th, as the tournament used a shotgun start to accommodate the size of the field with both boys and girls teeing off at 8am, but he then proceeded to play his next 13 holes in 4-under par.

His second bogey came on the difficult 406-yard par 4 7th hole but solid pars on his final two holes staked him to the one shot lead he'll take into Thursday's final round. Zalli of Richmond Country Club and Royal Colwood's Thoroughgood both carded 3-under par 69, tied for low round of the day and will join Sihota in the final group.

Goodfellow, who plays out of Pheasant Glen Golf Resort, carded a 2-under 70 and will be in the penultimate group with Vancouver's Andrew Spalti and Fort Langley's Jackson Jacob, who both recorded their second consecutive rounds of even par to sit level after round two. North Vancouver's Sean Buckles also put together two rounds of even par 72 and is T5th with Jacob and Spalti.

With the girls Hannah Lee put together her second straight sub-par round following her opening round 70 with a 71 as first round leader Akari Hayashi slipped back into a tie at for the lead recording a 1-over 73, her 3 birdies helped to offset two bogies and a double-bogey.

Just one shot back of the girl's leaders is Burnaby's Sumie Francois, the 2013 BC Juvenile Girls Champion, who has put together two very exciting rounds of 70 and 72 and is only one back of the lead. Francois has poured in 12 birdies over the first two rounds but her card has also seen 8 bogies and 1 double bogey.

Lee, Hayashi and Francois will make up the final group for the girls on Thursday. Delta's Amanda Minni and Surrey's Jayla Kang round out the top 5 for the Juvenile Girls after the two rounds.

The Zone team competition held concurrently with the Juvenile Championships was won by Zone 4 consisting of Sean Buckles, Vancouver's Ben Whiton, Amanda Minni and West Vancouver's Phoebe Yue. They were actually tied with Zone 3's Khan Lee and Andy Kim - both from Langley, and Surrey's Peter Zhang along with Devin Cutforth from Mission. The two teams tied with a 5-over total but Zone 4 was awarded the win in a countback.

There is also a best-ball competition being held which will conclude along with the individual play on Thursday. Aidan Goodfellow and Nolan Thoroughgood at 17-under par will take a 4 shot lead over Andrew Spalti and Langley's Khan Lee into the final round.