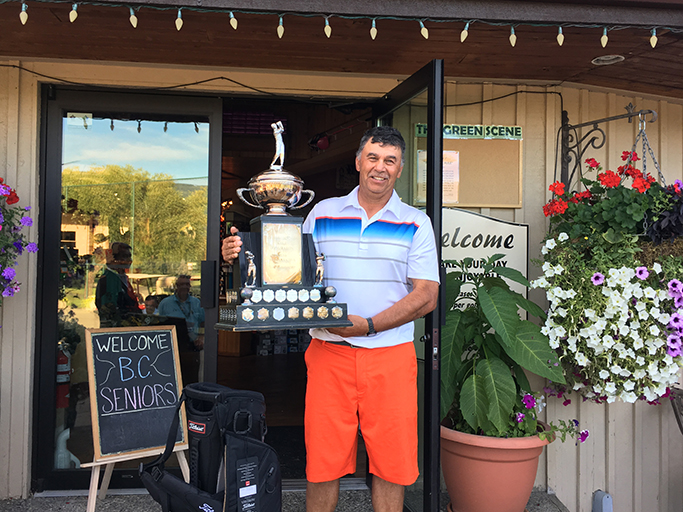 BLIND BAY -- Harry Ferguson had a dream about Thursday’s final round of the B.C. Men’s Senior-Super Senior Championship. Trouble was, he woke up early Thursday morning before finding out how it ended. It turns out there was no nightmarish ending, just a happy one for the 59-year-old oilfield worker from Invermere.

Ferguson beat Gudmund Lindbjerg of Pitt Meadows on the first hole of a sudden-death playoff to win his first provincial championship.

Ferguson and Lindbjerg both finished the 54-hole event at even-par on a Shuswap Lake Estates Golf & Country Club track that played tough. “It’s funny, I had a dream last night,” said Ferguson, who closed with a one-over 72. “I told Shelley I thought it was going to come down to the 18th hole, but I never found what the ending was. Now I know.”

Shelley is his caddie and partner, Shelley Thomsen, who happens to be a club pro at Eagle Ranch Golf Course in Invermere. And it did end on the 18th hole, which happened to be the first playoff hole. Ferguson said Thomsen helped keep him calm when things didn’t go their way.

An example of that came on the very first hole when Ferguson put his first shot of the day into water. They scrambled to make a bogey after the worst possible start to the round. “You know you are going to make bogeys out there somewhere,” Ferguson said.

“It just happened to be on the first hole. You just don’t want to make a double. That is all we were playing for after that. “I hit some bad shots out there, but Shelley just settled me down. She’d say, ‘let’s go find it, get it in play and try and get it up and down.’”

Lindbjerg, a 67-year-old who won this event four straight years starting in 2008, started the day with a two-shot lead on Ferguson. But he struggled with his ball-striking all day. “I didn’t hit the ball very good today,” said Lindbjerg. “On that par 5 (his 10th hole of the day) I had a 7-iron in and ended up with a par. I hit three inches behind the ball. That is the story. It was not there today.”

Lindbjerg did not make a birdie all day and ended up shooting a three-over 74. “That never happens,” he said. “I can’t recall any time I don’t make at least one birdie. That is the way the green rubs sometime. It’s his time, I guess.” 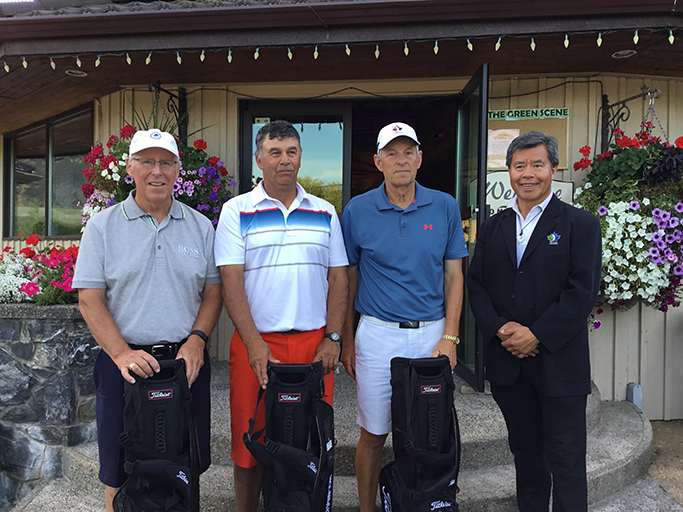 The BC Senior Men's Team That Will Compete In The Canadian Senior Men's Championship Includes (L-R) Doug Roxburgh, Harry Ferguson And Gudmund Lindbjerg

Ferguson drew even on the par 3 16th hole (the leaders started on the back nine Thursday) when he drained a 15-footer for birdie. “I said to Shelley, we have to make something and get the pressure on him, otherwise he is just going to waltz in and run us out of holes,” Ferguson said. “It just happened to go in and it was kind of a momentum shift there. I was pumped when I made that one.”

The playoff ended when Ferguson two-putted for par from the left fringe and Lindbjerg missed a 10-foot putt for par after putting his tee shot in the front bunker. Ferguson called the win the biggest of his life. He did place third in a previous Canadian Mid-Amateur Championship.

“Well, I do have a bronze medal in Canada, but to win a B.C. championship is special,” he said. “I am going to be driving home and I am just going to be pumped. It’s good to have my name on that trophy. It’s something I will always cherish.”

Ferguson will lead B.C.’s three-man team to the Canadian Senior Men’s Championship, which goes Sept. 6-9 in Niagara Falls, Ont. Joining Ferguson and Lindbjerg on that team will be Hall of Famer Doug Roxburgh, who finished alone in third place at four-over par after shooting a two-over 73 on Thursday. “I played better today, I just didn’t make any putts,” Roxburgh said. “And I made kind of a sloppy bogey on the last hole.”

Roxburgh and other competitors had high praise for Shuswap Lakes, a course many of them had not seen until this week. “It’s a great course,” Roxburgh. “It is a good test of golf. Even-par won and that’s always a sign of a good course. They had 75 volunteers come out to help, everyone was so friendly and the staff were great. It’s a really nice spot.”

Lindbjerg had to settle for his second straight Super-Senior title, which goes to the top player aged 65 and over. He beat second-place finisher John Gallacher of Burnaby by 11 shots.

CHIP SHOTS: Roxburgh and partner Alan Defoe of Calgary won the two-man best-ball competition that was held concurrently with the tournament. They finished with a score of 10-under par. . .Next year’s Senior Men’s tourney will be held at Myrtle Point Golf Course in Powell River.