Lindbjerg In Position To Win His Fifth Senior Men’s Title 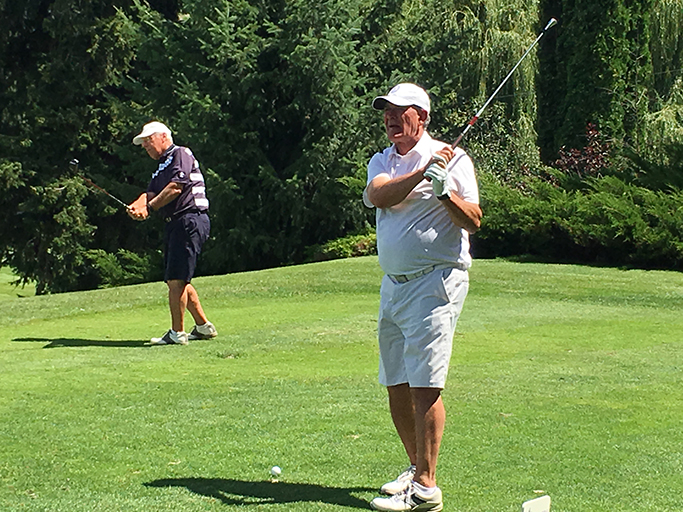 BLIND BAY -- Gudmund Lindbjerg’s four B.C. Senior Men’s titles came in four straight years. Now, five years after winning his last one in 2011, he finally has a chance to claim No. 5. The 67-year-old longtime Pitt Meadows Golf Club member shot his second straight 70 Wednesday and will take a two-shot lead into Thursday’s final round of the B.C. Men’s Senior and Super-Senior Championship at Shuswap Lake Estates Golf & Country Club.

“Five would be nice,” said Lindbjerg, who isn’t surprised at all to still be competing at a high level at his age “Why not? It is one of those things, you just have to keep the swing loose. You get to the point at my age where you just hit it, go find it and hit it again.”

Lindbjerg didn’t have to look too hard to find his ball on Wednesday. It was normally either in the fairway or on the green. “Today I hit the ball pretty good,” he said. “The putting wasn’t as good today. I kind of let myself down with the putting. Yesterday I putted better but I missed a couple today. It could have been better, but that’s golf.”

Lindbjerg has produced a rather remarkable amateur golf career for a guy who didn’t play the game until he was 29. He emigrated from Denmark in his early 20s and at that time was more interested in hunting ducks than chasing birdies on a golf course.

But after trying the game for the first time, golf had him hooked. He shot even-par with a borrowed set of old clubs the first time a buddy took him out for a round on a nine-hole course. “The next time I think I shot 100, but then I got hooked,” said Lindbjerg, who has been club champion at Pitt Meadows more times than he can remember.

His two-round total of 140 leaves him at three-under par. After playing as a par 71 in Tuesday’s opening round, tournament staff set up Shuswap Lake Estates as a par 72 on Wednesday by turning the long par 3 13th hole into a driveable par 4.

Lindbjerg is two shots ahead of Harry Ferguson of Invermere. Ferguson shot his second straight 71 on Wednesday. “I made lots of birdies (6), but had lots of bogeys (5),” Ferguson said of his roller-coaster round.

Ferguson, a 59-year-old oilfield worker, didn’t really come to the event expecting to win. But now that he is in contention, he hopes to take advantage of the opportunity. “My strength is off the tee,” he said. “I have lots of distance. I will be aggressive. Nobody ever remembers who finishes second.”

Ferguson knows the steady Lindbjerg won’t be easy to catch. “I definitely have him off the tee, but he’s such a good iron player and a good putter,” Ferguson said. “He doesn’t make too many mistakes. But I am going to put the heat on him, I’ll tell you.”

Sandy Harper of Nanaimo and Lance Lundy of Pemberton are also tied with Roxburgh at two-over par. Harper shot 75 Wednesday, while Lundy had the day’s best score, a three-under 69.

Lundy came to the tournament playing well. He recently shot his age -- 64 -- at his home course, Big Sky Golf Club. “I came here ready to play,” Lundy said. “I was disappointed with my round (a 76) yesterday. My putter was cold yesterday, but other than that I was hitting the ball very well.”

CHIP SHOTS: Lindbjerg looks like a lock to defend the Super-Senior championship for players 65 and older that he won last year. He has a seven-shot lead on Howard Broun of Calgary. . .A two-man best-ball competition is being held concurrently with the senior men’s tourney. The teams of Lindbjerg and John Gallacher of Burnaby lead at 10-under par through two rounds. Ferguson and partner Dave Showman of Coquitlam are two shots back. . .In the zone competition, Zone 6 (upper Vancouver Island) won with a total of 17-over 446. Zones 4 (Delta, Greater Vancouver, Squamish and Sunshine Coast) and 2 (Okanagan) tied for second at 455 . .The top three B.C. players after Thursday’s final round will represent the province at the Canadian Senior Men’s Championship, which goes Sept. 6-9 in Niagara Falls, Ont.