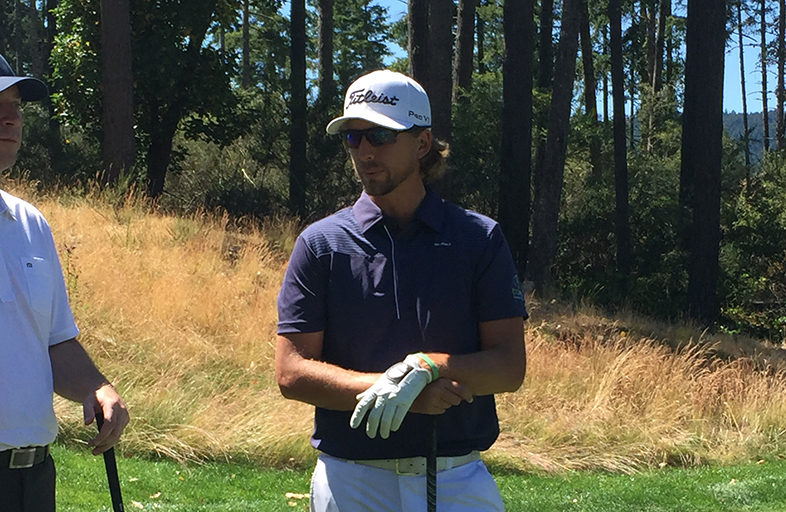 Surrey’s Adam Svensson recorded his first top-10 finish on the Web.com Tour on Sunday at the LECOM Health Challenge tourney in Findley Lake, N.Y. Svensson closed with a three-under 69 to finish at 13-under par and tied for ninth place.

Svensson earned $15,000, which moved him to 65th from 81st on the Web.com tour money list. That move is significant as the top 75 players on the money list qualify for the Web.com Tour Finals in September.

Merritt’s Roger Sloan also had a good week. Sloan shot a five-under 67 to finish tied for 14th place at 12-under. Sloan moved to 38th on the money list. He had started the week 44th.

Both Svensson and Sloan are hoping to move inside the top 25, which would guarantee them their PGA TOUR cards for 2017. However, if they miss the top 25 they can earn another chance at earning a PGA TOUR card by finishing anywhere between 26th and 75th and qualifying for the four-event Web.com Tour finals.

Ontario’s Mackenzie Hughes was the top Canadian on Sunday, tying for fifth spot at 16-under. He moved up to 84th on the money list. Seven regular-season events remain on the Web.com Tour schedule. The finals begin on Sept. 8.

CANADIAN OPEN SHOT: A tie for 15th place at the Players Cup in Winnipeg on Sunday helped the chances of Langley’s Adam Cornelson qualifying for a spot in the RBC Canadian Open later this week.
The top three players on the Mackenzie Tour-PGA Tour Canada money list after this week’s event in Thunder Bay, Ont. will earn exemptions into the Canadian Open.

Cornelson heads into the Thunder Bay second on the money list with $36,352. He has a lead of $1,002 on Max Rottluff of Germany, who is third, and is nearly $8,000 ahead of Ryan Williams of Vancouver, who is fourth.

Meanwhile, American Dan McCarthy continued his remarkable Mackenzie Tour run in Winnipeg, where he won for the third time this year. McCarthy beat Michael Gilgic of Burlington, Ont. and American Cameron Peck by seven shots and has virtually clinched the Order of Merit title and a full exemption on next year’s Web.com Tour.

RETURN VISIT: Abbotsford’s Adam Hadwin will again use the Vancouver Golf Tour to keep his game sharp as he enjoys an extended break from the PGA TOUR. Hadwin was scheduled to compete in Monday’s Hollis Wealth Pro-Am at Marine Drive Golf Club. Last week, Hadwin won the VGT’s Vancouver Open at Pagoda Ridge in Langley.

Hadwin’s next PGA TOUR event will be the RBC Canadian Open, which goes July 21-24 at Glen Abbey Golf Club in Oakville, Ont. Abbotsford’s Nick Taylor returns to the PGA TOUR this week at the Barbasol Championship in Alabama. No Canadians qualified to play in this week’s Open Championship at Royal Troon in Scotland.