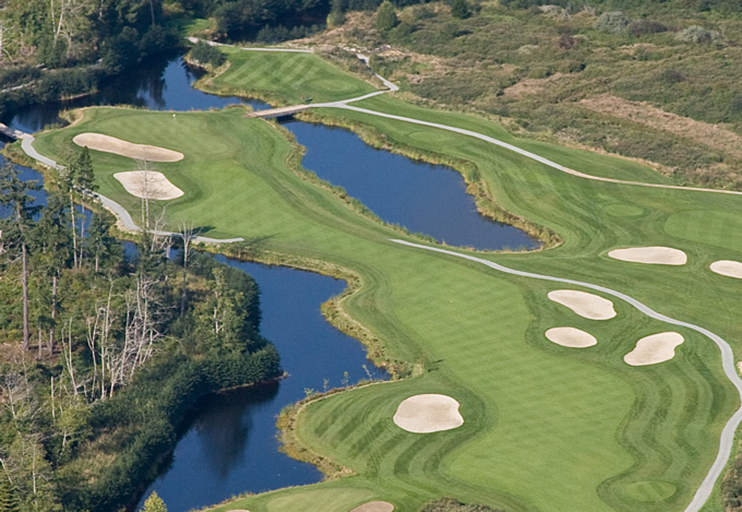 Pheasant Glen Golf Course In Qualicum Beach Is The Site Of The 114th B.C. Amateur This Week - Image Courtesy Facility

Pheasant Glen Golf Resort in Qualicum Beach isn’t exactly new, but it is to Roxburgh. The course dates back to the early 1990s, when it opened as an executive-length layout.

It was bought by Bill Dutton of Calgary in 1997 and over the years Dutton and his family have expanded the course. It became an 18-hole championship layout after extensive renovations in 2005 and in the ensuing years has played host to a number of significant amateur events, including the 2006 B.C. Mid-Amateur, the 2007 B.C. Women’s Amateur, the 2008 Canadian Mid-Amateur and the 2015 Future Links Pacific Championship.

Pheasant Glen is a par-72 layout that can be stretched to more than 6,900 yards from its back tees. Gord Melissa, the longtime general manager/head professional, says keeping the ball in play off the tee will be key for competitors this week. “There are generous landing areas, but if you venture off... it’s a lost ball,” Melissa says. “The biggest key is to get the ball into play off the tee and manage yourself around the greens.”

A few Pheasant Glen members are playing in this week’s B.C. Amateur, including 63-year-old Brian DeBiasio, a former Nelson resident who retired to the Qualicum area nearly five years ago. DeBiasio, who finished second to Roxburgh at the 2013 B.C. Senior Championship, agrees that driving the ball well is a key at Pheasant Glen. But he says the course tests all parts of a player’s game.

“I think it is going to take someone with an all-around game,” DeBiasio says. “You are going to have to be able to hit it tee to green and have a good short game. It’s not super-tight but you need to execute your tee shots, figure out what you are going to hit off the tee. It is not going to be all drivers.

“Second shots into the greens will also be important. The green complexes are very fair, but there are a number of greens that have different sections to them and so getting it into the right section with your iron play and knowing where you can miss is key. It's going to take an all-around game. It is not going to be a person that just has one strong part to their game.”

DeBiasio says another key to success at Pheasant Glen will be surviving the opening and closing stretch of holes. The course is probably best known for its finishing three holes. Two of them -- 16 and 18 -- are par 5s. “No. 16 is a definitely a risk-reward hole,” DeBiasio says. “The longer players are going to be able to get there in two. But you are going to have to be on your game to attack that green from any kind of distance.”

The par 4 17th hole plays more than 420 yards from the back tee and there’s trouble just about everywhere. “There’s water on the left on the tee shot and on the right and left on the second shot,” DeBiasio says. “The front half of the green is pretty accessible but the back half is very dangerous to go at.”

The 18th hole can be stretched as long as 590 yards, but figures to play about 550 during the tournament. “The longer guys will still have a chance to reach it in two, but it is a dogleg so it is a bit of a blind second shot if you're going for the green,” DeBiasio says. “The dogleg starts at about 120 yards in. Once again, there is danger out there, but there is an opportunity to make a birdie if you hit good shots.”

DeBiasio says the opening three holes also pose a stern test at Pheasant Glen. “No. 1 is a par 5 and the longer guys will have the distance to get there, but it’s a very, very dangerous shot into the first green from any distance.

“No. 2 is a good long par 4 with water down the left side. And it has a very undulating green. No. 3 has been lengthened with a new tee. It used to be a short par 4, but now it’s just over 400 yards. It’s a dogleg so it’s a tougher tee shot fitting your drive between the fairway bunkers. And the green is probably the toughest on the golf course. It’s long and narrow with all kinds of slopes and well-bunkered.”

“So the first three and the last three holes, I think, are probably going to be the toughest test. If you can start well and finish well, in between you’ve got a chance to make some birdies.”

The B.C. Amateur is a 72-hole event and begins on Tuesday. Melissa knows some low scores will be shot but does not expect any one player to have his way with the course all four rounds. “Over 72 holes I think the champion is going to be somewhere between three- and eight-under par,” Melissa says. “If someone took it lower than eight-under par they’d be firing on all cylinders four days in a row.”

The competitive course record at Pheasant Glen from the back tees is 67. “I think someone will have a 67 or 68 in them, maybe even a 66 depending on pin locations that day and conditions, but I’d be surprised if someone backed that up a couple of days in a row. In the past it just hasn’t happened here.”

Much of the focus this week figures to be on Roxburgh, a 13-time winner of the B.C. Amateur. DeBiasio has played in more than 20 B.C. Amateurs and has a hard time fathoming someone playing in 50 of them. “It is incredible,” DeBiasio says. “I have played with Doug a few times over the years. He has obviously been an unbelievable golfer, but those of us who have played alongside him know he is even a better person than he is a golfer. You just hope he plays well this week and goes out with a flourish.”

CHIP SHOTS: The field will be cut to the low 70 and ties following Wednesday’s second round. Roxburgh has missed just two cuts in his 49 B.C. Amateur appearances. Jared du Toit of Kimberley will not be defending his 2015 B.C. Amateur title this week.