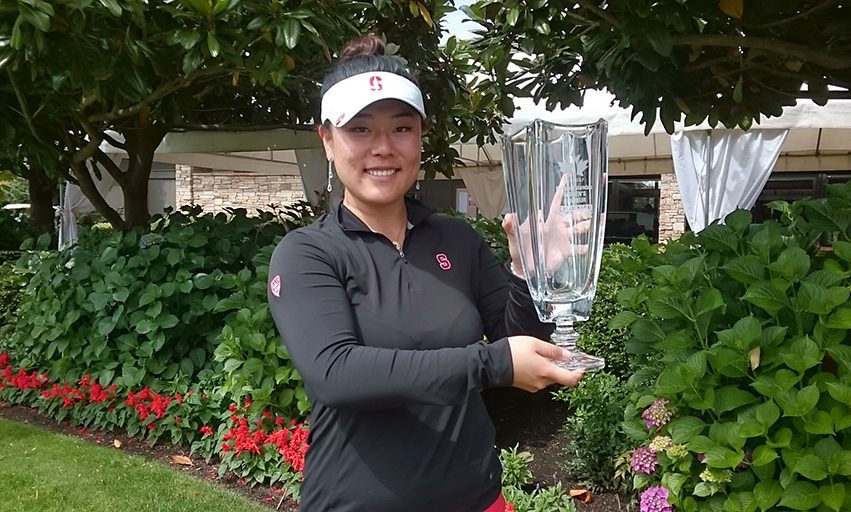 Jisoo Keel didn’t save her best for last, but she really didn’t need it. The 20-year-old former Coquitlam resident began Friday’s final round of the B.C. Women’s Amateur Championship at Beach Grove Golf Club in Tsawwassen six shots ahead of the field. When the day ended, nothing had changed and Keel was hoisting the AC Flummerfelt Cup.

Keel closed with a one-over 73 -- her highest round of the week -- to finish the 72-hole event at eight-under par. Delta’s Mary Parsons, who also shot 73 on Friday, was second at two-under.

While obviously pleased with the win, Keel was frustrated by the way she finished her round. She bogeyed the par 3 16th hole after putting her tee shot in the back bunker, lipped-out her birdie attempt from three feet on the par 5 17th and then three-putted for bogey on the par 4 18th.

“It wasn’t my best round of golf and the last few holes were very frustrating,” Keel said. “The last bogey on 18 has left a foul taste in my mouth. My putter disappointed me today.”

The win comes as Keel, a former B.C. junior golf star who graduated from Gleneagle secondary in Coquitlam, makes a return of sorts to competitive golf. She is heading into her senior year at Stanford University this fall, but has not played for the golf team the past two years after deciding to focus on her studies. “It is pretty special to win a big tournament like this by six shots, especially coming after I took a break from competitive golf,” she said. “It just shows that I am good enough, I guess. I am back to what I used to do.”

Keel, who won an amateur event in California last month, said her recent good play has helped reignite her passion for golf. She does not rule out making a run at a pro career once she finishes her schooling at Stanford. “My life is always a dilemma,” she said with a laugh.

“I always have to make these huge decisions that affect my life. There are a lot of decisions ahead. The priority for me is to complete my degree. I think it is very important for me to finish my schooling and have that as a really good back-up plan to golf.”

Neither was Parsons, a promising 17-year-old who heads into next week’s B.C. Junior Girls Championship at Big Sky Golf Club in Pemberton as one of the favourites. Parsons wasn’t able to put any pressure on Keel on Friday, but it wasn’t from a lack of trying. “I struggled a little bit with my putting and short game,” Parsons said.

“On the front nine, I left some putts short. I gained one shot on her on the front, but easily could have gained three. I read my putts right, but just couldn’t capitalize on them. But to finish solo second and the top junior going into the B.C. Juniors next week is a good confidence-boost.”

Jamie Huo of Kent, Wash., finished third at three-over par, while Hannah Lee of Surrey was fourth at four-over. Defending champion Michelle Kim of Surrey had a tough final round. She shot an 80 and dropped into eighth place at nine-over.

As the top three B.C. finishers, Keel, Lee and fifth-place finisher Katherine Chan of Richmond will represent the province at the Canadian Women’s Amateur Championship, which goes July 26-29 at Ken-Wo Golf Club in New Mines, N.S.

CHIP SHOTS: Parsons and Amanda Minni of Delta won the two-person best-ball competition that was held concurrently with the tournament. Their winning score of 21-under par was one shot better than the team of Alisha Lau of Richmond and Lee. Tiffany Kong of Vancouver and Chan were third at 19-under par. . .Next year’s B.C. Women’s Amateur Championship will be held at Vernon Golf Club.