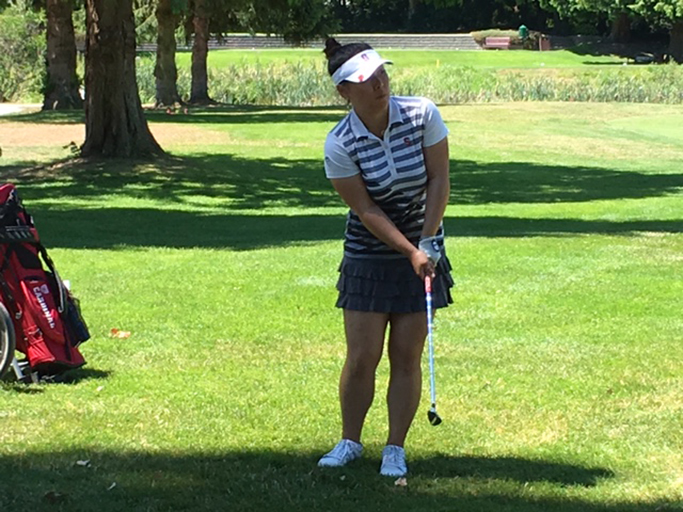 Nicole Bird jokes that she is looking for the next Graham DeLaet. That would be the female version, of course. Bird is one of a handful of U.S. college golf coaches who have spent the week in Tsawwassen assessing the talent at the B.C. Women’s Amateur Championship at Beach Grove Golf Club.

Bird is heading into her 10th season as women’s golf coach at Boise State University, where DeLaet played his collegiate golf before becoming one of Canada’s top pros. “Besides Graham, we have had a few other Canadian men as well, so I am trying to kind of break into that a little bit,” Bird said.

Many of the young women competing at Beach Grove this week have already committed to a U.S. school. “But there are probably eight or 10 others who haven’t,” Bird said.

John Dormann has been head coach of the women’s golf team at San Jose State University for 19 years. He came to Beach Grove on the advice of one of his former players, Megan Osland of Kelowna.

Osland just graduated from San Jose State and recently turned pro. “Megan kind of recommended one of the players here and there have been a couple of others we have been in contact with,” Dormann said. “It is kind of doing your due diligence, to come up and watch them live and in action.”

Players generally commit to schools the summer before they enter Grade 12. “We are even looking at our 2018 class and there's a 2019 kid here who is very impressive,” Dormann said. And who might that be? “I can’t say,” he said with a smile. “That would be illegal. I would have to take your tape recorder from you if I told you.”

Dormann said he looks at more than scores when scouting players. “Most people think you're looking for a score, but I can look online for scores,” he said. “I am looking at the temperament of the player, do they have a process, their routines, their grip. That's kind of the first thing I look at.

What does their grip look like because we can help them with a lot of things, but a grip, if they have been playing golf and hitting balls for 10 years, you are not changing their grip. It is what it is at that point.”

Kansas State, Oregon State and Colorado have also been scouting this week’s tournament. Colorado’s assistant golf coach, Brent Franklin, is a familiar name to Vancouver golf fans. The Canadian Golf Hall of Fame member has been coaching at Colorado for the past dozen years.

The school has had a number of B.C. women in its golf program, including Langley’s Jessica Wallace, who is now playing on the Symetra Tour. “I go to maybe five or six events in the summer and I like to come here because my parents live here and my sister,” Franklin said. “So it’s always nice to get back up here and see how the local kids are doing. There’s a lot of good ones.”

Amanda Minni, who plays out of Beach Grove, is one of the players still up for grabs. Minni just finished Grade 11 and has had offers from a number of schools. She expects to make a decision soon and said Thursday she doesn’t get particularly nervous playing in front of college coaches. “For me, I like to play with pressure, I think I play a little bit better with pressure,” Minni said.

“It makes me focus more. All the coaches who come out seem to be super-nice, they don’t necessarily care about how I play. They want to see how I act on the course. They can see my scores online. So they know what I shoot, they just want to see what I'm like as a golfer.”

Meanwhile, Minni and everyone else in the field is chasing Coquitlam’s Jisoo Keel, who isn’t going to be easy to catch. Keel shot a three-under 69 in Thursday’s third round and takes a six-shot lead into Friday’s final round.

Keel, who stands at nine-under par through 54 holes, said she got the most out of her round on Thursday. “It was very, very frustrating in the sense that I could not hit a shot,” Keel said. “I had to scramble so many times to make par. My tee shots were everywhere. I have to go to the driving range. There is no other option, I have to go practise.”

Mary Parsons of Delta is alone in second place at three-under after shooting a two-under par 70 on Thursday. The 17-year-old knows it will be difficult to chase down Keel. “She is a really good player and it will be tough to catch her but if just stick to my game plan I have a chance,” Parsons said.

“I had opportunities to make some more putts today, but I kind of just tensed up on some six-footers. If I make those, I easily could have been 68 or better today. Tomorrow should be good coming down the stretch with her. I am looking forward to it.”

Defending champion Michelle Kim of Surrey shot a two-over 74 Thursday and is alone in third place at one-over par.

CHIP SHOTS: The final group will tee off at 10 a.m. in Friday’s final round. . .The top three British Columbia players after the final round will represent the province at the Canadian Women’s Amateur Championship, which goes July 26-29 at Ken-Wo Golf Club in New Mines, N.S. The Zone 4 team of Amanda Minni and Mary Parsons won the Zone Team competition by 17 shots over Mackenzie Barrie and Madison Kapchinsky of Zone 2. Minni and Parsons are also tied for the lead in the best-ball competition at 15-under with Alisha Lau and Hannah Lee going into the final round. The duo of Kathrine Chan and Tiffany Kong sit one shot back at 14-under.