With School Out For Summer, Jisoo Keel’s Attention Returns To Golf 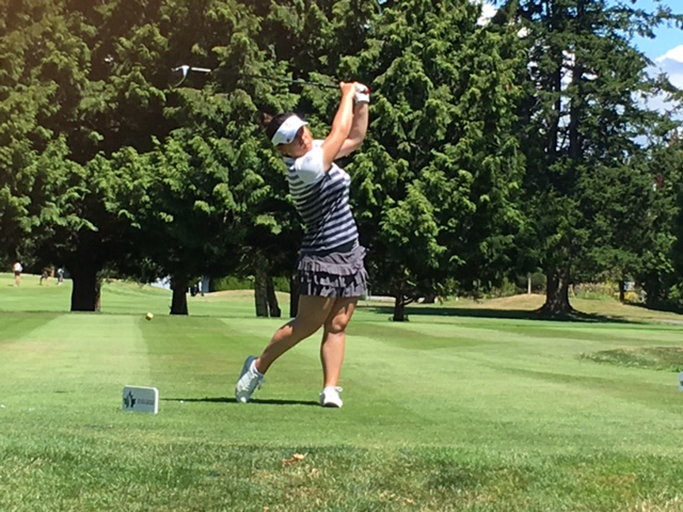 A funny thing happened when Jisoo Keel accepted a golf scholarship from Stanford University. She discovered there was more to life than golf.

But lately, golf has taken a back seat to Keel’s educational ambitions. “I haven’t played much competitive golf the past two years,” Keel said Wednesday. “I have been more focused on school. I really want to make the most out of my Stanford education. I am heading into my senior year and hopefully I will be starting my Masters degree the following year.”

After some time away from the game, Keel is dipping her toes back into the competitive waters. She is competing in this week’s B.C. Women’s Amateur Championship at Beach Grove Golf Club in Tsawwassen and playing very well. So well that she has a five-shot lead at the halfway point of the four-round tourney.

Keel fired a four-under 68 Wednesday and sits at six-under par through 36 holes. “I had some frustrating moments today, but I got over it,” Keel said. “I am just playing golf. I am not worried too much about anything because there is no more school for the summer. I am just golfing for fun.”

Keel had six birdies in her round Wednesday, including two on the 14th and 15th holes, both par 5s. “I stayed pretty consistent,” she said. “I took some risks and they paid off on some of the par 5s. My putting was a lot better as well. There were some silly mistakes after the front nine but I bounced back and I am proud of myself for that.”

Four years ago, Keel looked to be on the fast-track to a successful pro career. She won the 2012 Canadian Women’s Tour opener as a 16-year-old amateur at Richmond Country Club. That field, comprised mainly of pros, also included a then 14-year-old Brooke Henderson.

The win earned Keel a spot in the 2012 Canadian Women’s Open at Vancouver Golf Club, the private Coquitlam course that months earlier had granted her playing privileges. Keel has no regrets having put golf on the back-burner as she watches Henderson rise to No. 2 in the world.

“First of all, I am extremely proud of her,” she said of Henderson. “She is a superstar. I can’t believe I actually had the honour of playing with her on the national team. I want to do what makes me happy because you only have one life to live and I love school.

I love golf, too, so it’s like juggling two things at once. I just want to put 100 per cent of my effort into something. . .I guess it’s a good dilemma to be in if you like school and like golf and are good at both.”

Keel leads defending champion Michelle Kim of Surrey and Delta’s Mary Parsons by five shots. Kim, who led after a first-round 69 on Tuesday, shot a two-over 74 on Wednesday when she couldn’t get a putt to drop. “I had no birdies today, which is really tough for me,” Kim said. “I just missed a lot of medium-length putts today. I don’t expect to make long putts but those medium ones for birdies they didn’t drop in.”

Keel is majoring in science technology and society at Stanford, a school renowned for its academics. After trying to juggle golf and her studies in her freshman year, Keel made the decision to concentrate solely on her schooling. “Stanford is amazing,” she said. “It is everyone’s dream school, so I feel very privileged to be there. . .It was very difficult to try and juggle school and golf. The smartest people are there and when you have to dedicate so much time to sport it is just very difficult.

So I had to make a few hard decisions after my freshman year. I decided to focus more on school because I shouldn’t let my Stanford education go to waste and do half golf and do 50 per cent academics. I just couldn’t do it.”

Keel hasn’t completely ruled out a possible attempt at a pro golf career down the road, but prefers to dwell on the present. “i am just going to focus on what I am doing right now and when it comes to that decision I’ll think it through,” she said.

CHIP SHOTS: Jamie Huo of Kent. Wash., sits alone in fourth place at even par. Hannah Lee of Surrey, Madisen Bently of University Place, Wash., and Alish Lau of Richmond are tied for fifth at one-over par. . . The field was cut to the low 35 players and ties after Wednesday’s second round. The cut came at 20-over 164. . .Josee Deslauriers of Parksville aced the 135-yard par 3 fourth hole Wednesday It was her fourth career hole-in-one. . .The final group will tee off at 9:50 a.m. in Thursday’s third round.