A.J. Ewart Shoots 64 To Take Second Round Lead In BC Junior Boys Championship 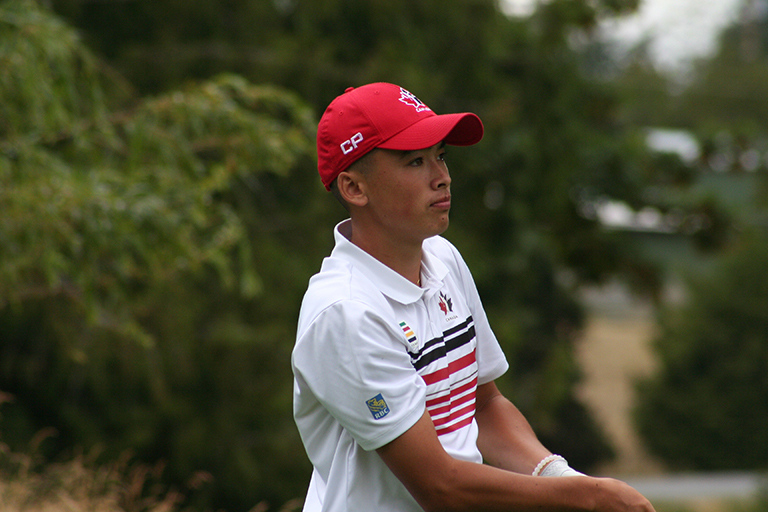 Coquitlam's A.J. Ewart Jumped Into The Halfway Lead At The BC Junior Boys Championship With A Bogey-Free 6-under 64 - Image Credit Bryan Outram

What a difference a day makes. Round two of the BC Junior Boys Championship at Arbutus Ridge Golf Course in Cobble Hill was played under beautiful blue, calm, sunny skies following an overcast, damp, windy and mostly cool opening round.

The change in the weather obviously agreed with many of the young guns in the field for the 71st edition of this championship as evidenced by some of the big turnaround scores posted.

The reversal of fortune was led by 2015 BC Juvenile Boys Champion A.J. Ewart who fashioned a bogey-free round of 6-under 64 to jump into the lead at the halfway point sitting at 3-under (137).

The 6-under 64 score was one shot off the official course record of 63 but more importantly it put some bounce back into the step of the young man who was not quite so upbeat following his first round performance. Ewart improved by 9 shots over a rather pedestrian 3-over 73 on day one that included 5 bogies and two birdies.

He explained it this way, "Yesterday in the afternoon we played in the wind, this morning it wasn't really windy so scoring conditions were better. And some putts started to fall at the end of the round, when they didn't at all yesterday, so that was good. I think I just managed myself around the golf course better today."

Meanwhile first round leader Cameron Bourque slipped back a little shooting a 2-over 72 but still sits in a 3-way tie for second at 1-under (139). Also at 1-under are Sechelt's Keenan Flemming and Adam Veenstra from Smithers whose 3-under 67 was one of only 6 scores under par on the day. “I was excited to play today after playing well yesterday but not making any putts. Today I was solid from tee to green, I hit 16 greens. I’m looking forward to tomorrow,” said a smiling Veenstra.

Pitt Meadows' Isaac Lee was alone in 5th spot after his second consecutive round of even par 70 with 'hometown' lad Tristan Mandur in a group of 4 players one shot further back T6 at 1-over that includes Vancouver's Andrew Spalti, Coquitlam's Henry Lee and Parksville's Aiden Goodfellow.

At the other end of the spectrum, an obviously dejected Michael White went slightly in the other direction after opening with a 1-under 69, his first ever sub-70 round, as he struggled to a 2nd round of 8-over 78 and sits T27 at 7-over (147).

“Seventy-eight is the score I wanted to shoot yesterday…but that doesn’t make it feel any better," he said, "I just didn’t do things well. I was loose out there, a little tired…” White, a Princeton Secondary student is going into grade 12 next year and is playing in his first provincial championship event.

Meanwhile, perhaps the feel-good story of the day came from Delta’s Dustin Franko who joined in on the “it’s a new dawn, it’s a new day and I'm feeling good” refrain rebounding from an opening round 12-over 82 by knocking 14 shots off that number and posting a 2-under 68 that moved him from the outside looking in, into a T42. And not far behind that was Kamloops' Adam Niles who improved from a first round 15-over par 85 to an even par round of 70 and made the cut one under the number.

The cut to the low 70 and ties included 74 players overall who will tee it up for the final two rounds beginning Thursday morning at 7:30am.

In the concurrently run Zone competition, Tristan Mandur, Keaton Gudz, Nolan Thoroughgood and Cameron Bourque of Zone 5 hung on to their first round lead to win the team competition although their advantage was narrowed with 'Team Lee' from Zone 3 - Khan Lee, Henry Lee, Willis Lee and Jaewook Lee (no relation) pulling to within 5 shots to finish 2nd.

There is also a two-ball competition underway which will run all four rounds. After two rounds there's a 3-way tie at the top between the Thomas Verigin/Andrew Spalti duo, Keaton Gudz/A.J. Ewart tandem and the Adam Veenstra/Tristan Mandur team at 12-under par. The teams of Isaac DH Lee/Victor Choi and Henry Lee/Daniel Sun are T4 four shots back at 8-under.