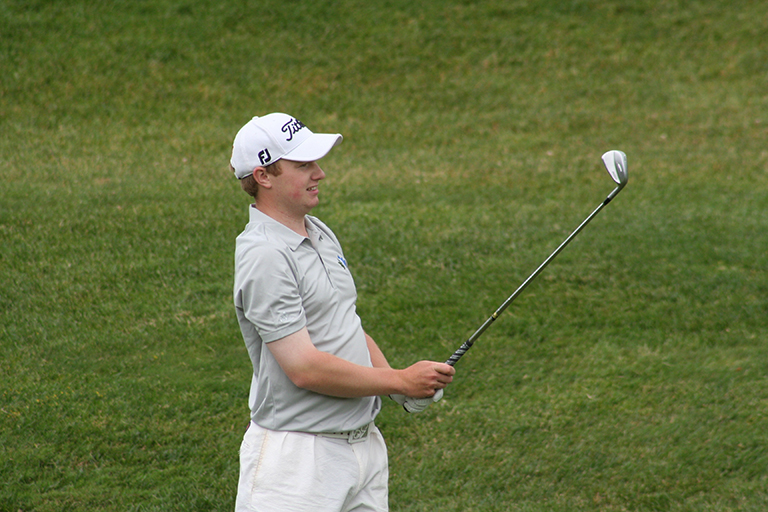 On an overcast, cool day that tested the best male Junior golfers in British Columbia it was Cameron Bourque's steady play in recording a 3-under 67 that staked him to a one shot lead over Parksville's Aidan Goodfellow and Vancouver's Andrew Spalti after the first round of the BC Junior Boys Championship being held at Arbutus Ridge GC in Cobble Hill.

Bourque, a member of Uplands GC in Victoria carded four birdies against just one bogey en route to posting his score from the morning groups and watched it hold on throughout the rest of the day. Notably, he birdied both of the par 3's on the back nine including the difficlut island green 17th that caused fits for many of the players throughout the day.

"I've driven the ball well lately but haven't made as many putts as I would like. My proximity today was really good so I was able to make a few more than I have been," said Bourque. "I've played here about half-a-dozen times but the tee boxes were set in places I'm not used to so I was pleased at how I adusted to the set-up."

Bourque who is headed to Drury University (formerly Springfield College) in Springfield Missouri in the fall, figures he just has to keep doing more of the same in round two, "I'm happy with how I'm hitting it, now I just have to sleep on it and keep it going tomorrow."

Spalti, who plays out of Shaughnessy G&CC and was a member of the West Point Grey Academy team that won the BC High School Championship this summer, recorded one of the four eagles made on day one, all at the 493-yard par 5 10th hole.

Goodfellow, a member of Pheasant Glen Golf Resort where next week's BC Men's Amateur is being held, had 3 pars, 3 birdies and 3 bogeys on his even par front nine. Two birdies on the inward nine at 10 and 14 got him into red numbers for the day. Michael White from Princeton is alone in 4th place after a 1-under 69. Michael is staying with his grandmother who happens to live in the Arbutus Ridge community and was one of a nice entourage cheering him on.

A group of five players are at even par 70 and sit in fifth place heading into the second round. In that group is Mill Bay's Tristan Mandur who recently won the Zone 5 Junior Championship and is a member of Arbutus Ridge. One shot further back is Royal Colwood's Keaton Gudz, the runner-up in that Zone 5 event, and Surrey's Tanvir Kahlon

The 2015 BC Junior Boys runner-up Zaahidali (Ziggy) Nathu sits T12th with seven other players at 2-over par 72.

Running concurrent with the BC Junior Boys event is a Zone Championship and after round one the Zone 5 team consisting of Bourque, Gudz, Mandur and Nolan Thoroughgood, who plays out of Royal Colwood and is a member of the 2016 BC Summer Games Team, lead by 9 shots over Zone 3 and Zone 4.

The second round of the British Columbia Junior Boys Championship in Cobble Hill starts at 7:30 a.m. on Wednesday.