Michelle Kim Back To Defend Her B.C. Women’s Amateur Title At Beach Grove 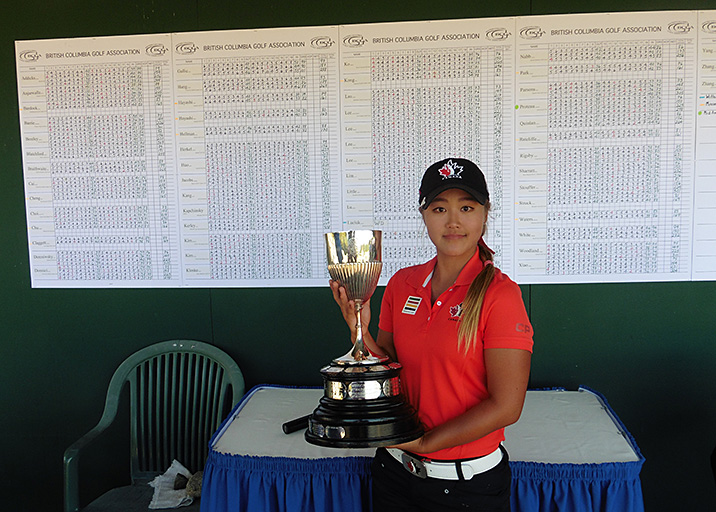 We are about to find out what Michelle Kim is going to do for an encore. Last year, Kim got what was a super summer started by winning the B.C. Women’s Amateur Championship at Duncan Meadows on Vancouver Island.

Kim turns 19 on July 21 and is not eligible to defend her B.C. Junior and Canadian Junior titles. But she is defending her Women’s Amateur title at Beach Grove Golf Club in Tsawwassen.

“That was definitely a big win for me last summer at Duncan Meadows, especially playing well beside my sister,” Kim said. “That was one of my biggest achievements and I’m looking forward to defending at Beach Grove. I am really excited. The field looks good and I am looking forward to playing my best.”

The private Tsawwassen layout is not a course that Kim knows especially well. “I have only played it once during a Canadian Women’s Tour event three or four years ago,” said Kim, who just completed her freshman year at the University of Idaho. “I do remember there were a lot of trees and it was narrow in spots.”

The 61-player field for the 72-hole stroke play event that begins Tuesday at Beach Grove will include many of B.C.’s top juniors, including Hannah Lee of Surrey, Tiffany Kong of Vancouver, Alisha Lau of Richmond, Mary Parsons of Delta, Gloria Usu Choi of Langley and Sumie Francois of Burnaby.

The field will also include a couple of veterans, including B.C. Senior Women’s champion Holly Horwood of Vancouver and Canadian Golf Hall of Fame member Alison Murdoch of Victoria.

They will face a par-73 Beach Grove course that includes six par 5s and five par 3s. “The course is in fantastic shape,” said Brent Derrheim, the longtime head professional at Beach Grove. “The weather has really been on our side. This time last year we were in drought conditions and this year we are in excellent shape just based on the weather patterns we've been getting.”

Derrheim said it will be key for players to keep their tee shots on the fairways at Beach Grove, which dates back to 1929 and opened as a nine-hole course. “I think to score well the women are going to have to really place their approach shots into the greens,” Derrheim said.

“Some of our greens are surrounded by bunkers and it's really going to come down to staying out of the rough and placing their approach shots from the fairway. It's going to be important that they are coming in from the fairway and are able to control the ball versus being in the rough where they won’t have as much control.”

With six par 5s to attack, Derrheim thinks there could be some low scores. “I suspect the scores for a few will probably be on the lower side,” he said. “Over the course of a four-day tournament I think under par will most likely win.”