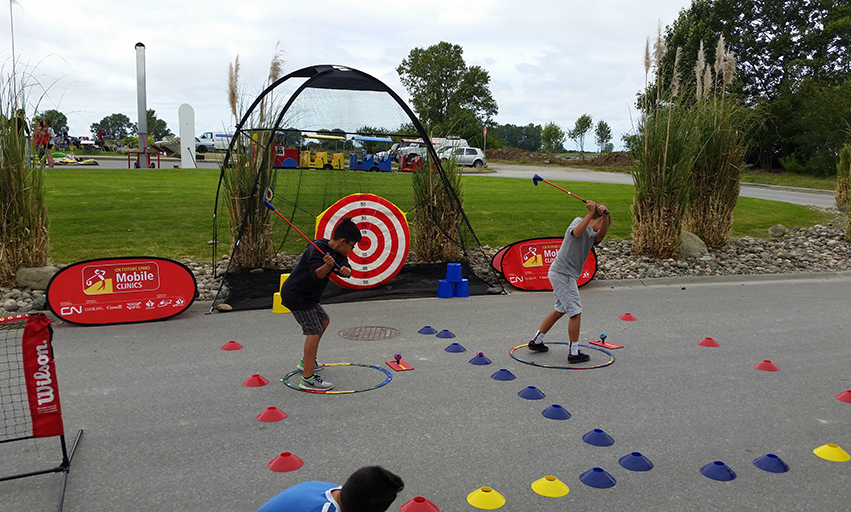 The day began with the opening ceremony in the Musqueam Centre gymnasium. Young girls dressed in traditional Musqueam clothing entered the room singing hymns passed down from their elders.

The display reminded those in attendance of the importance of National Aboriginal Day, and what it means to Musqueam Nation. As the opening ceremony concluded, the block party ensued. Music, and barbecue filled the surrounding area with the sounds and smells of a block party celebration.

On the north end of the street were the VPD (Vancouver Police Department) showing their support and giving anxious Aboriginal youth the opportunity to see the inside of their squad cars, and letting them sit atop their motorcycles.

As you made your way along the street there were local businesses who had set up their own booths in support of National Aboriginal Day, as well as Musqueam elders selling traditional clothing and regalia.

Finally, at the end of the street was the BC Golf booth, and swing net with an endless line of children waiting for their turn to whack some balls onto the target.

Over 120 Aboriginal youth were introduced to golf thanks to the BC Golf booth, and swing net. Many of the children did not want to leave, going directly back to the end of the line chomping at the bit to have another opportunity to hit the bullseye on the target.

Every child who participated received their own CN Future Links certificate, and a golf goody bag comprised of tees, ball markers, and divot tools. A ball cap awaited the fortunate ones who were able to hit the bullseye.

Golf Participation Coordinator for BC Golf, Stephanie Wong, says everything is in place for the youth to succeed. “We feel this is great way to introduce aboriginal youth to the game of golf, these kids are very fortunate that they have Musqueam golf course and practice centre just up the street. For the kids that want to pursue the game further, the infrastructure is there to be had.”

Wong also noted that all members of Musqueam Nation are able to use the Musqueam golf facility free of charge, adding to the accessibility of furthering their involvement in the sport of golf.

Overall the golf station was looked upon as a success, with an overflowing number of aboriginal youth taking part in the fun.

BC Golf hopes to build on this year’s event by continuing to get more aboriginal youth introduced, and involved in the sport of golf.