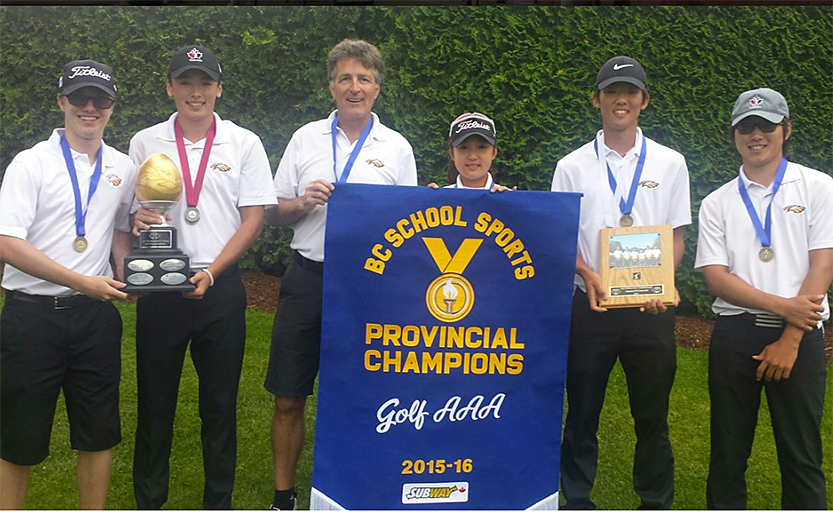 McCarthy, who closed with a seven-under 64, finished the $175,000 Mackenzie Tour-PGA Tour Canada event at 25-under par. That was seven shots better than runner-up Ryan Williams of Vancouver.

McCarthy won the tour opener at Point Grey in Vancouver, then followed that up with a tie for sixth in Victoria. He has now shot a collective 50-under par in the first three events of the Mackenzie Tour season.

McCarthy also put a stranglehold on the money list. The top finisher at year’s end earns a full exemption on the 2017 Web.com Tom Tour, while those second through fifth receive conditional status. McCarthy has made $68,863 in three events. That is about $35,000 more than Langley's Adam Cornelson, who is in second spot.

“I couldn’t have pictured a better start,” McCarthy said. “I am not going to say that locks it up, but I think that takes care of the top five. Now the goal is finish No. 1 and be fully exempt out there next year. I am going to hope to bottle this up for a very long time.”

McCarthy earned $31,500 for the win. Williams received $18,900 for his second-place finish. He also earned a $2,500 bonus from Freedom 55 Financial for being the top Canadian. Williams also won that award at Point Grey, where he finished seventh. He now stands third on the money list.

“It's a good start to the year,” said Williams, who finished one shot ahead of third-place finisher Caleb Sturgeon of South Carolina. “Being able to win Canadian Player of the Week two of three weeks to start the year is very rewarding.”

Victoria’s Cory Renfrew tied for fifth at 14-under par after shooting a 69 on Sunday and earned $6,387. Langley’s Cornelson, last week’s winner in Victoria, closed with a three-under 68 and finished tied for 21st at 10-under par. Seann Harlingten of West Vancouver also finished at 10-under after his 69 Sunday.

GolfBC announced that the tournament raised $150,000 for the B.C. Cancer Foundation. The Mackenzie Tour takes next week off before resuming June 23-26 for the SIGA Dakota Dunes Open in Saskatoon.

Kwalikum Secondary of Qualicum Beach won the Double A provincial title at Capilano Golf & Country Club in West Vancouver. Kwalikum finished the two-day competition at 25-over par, nine shots ahead of Collingwood Secondary of West Vancouver. Jake Lane of Kwalikum finished at seven-under par to win the individual title by five shots over Mary Parsons of St. Thomas More.

The Single A title was won by West Point Academy of Vancouver at Christina Lake Golf Club. West Point finished at 33-over par, 20 shots ahead of Immaculata of Kelowna. Joel Veenstra of Bulkley Valley Christian in Smithers shot five-under par to win the individual title. Andrew Spalti of West Point Academy was second at two-under.

GIVING BACK: Classy move by PGA TOUR regular Nick Taylor to give back to his Fraser Valley roots and play in the University of the Fraser Valley’s annual fund-raising tournament this Friday at Ledgeview Golf Club. It is the second straight year that Taylor, a graduate of Yale Secondary in Abbotsford, will play in the Algra Brothers UFV Cascades Pro Am. The event is now part of the Vancouver Golf Tour.

“I can’t tell you how excited we are to have Nick back again this year,” said UFV golf coach Chris Bertram. “Time is a precious commodity to PGA TOUR players and the fact he is willing to come out and support our program says a lot about how much Nick cares about his community and growing the game of golf.” Former PGA TOUR regular Ray Stewart, who was instrumental in starting the fund-raising tournament six years ago, will also play on Friday.

JUNIORS SHINE: There were some great finishes by B.C. players at the CN Future Links Prairie Championship in Neepawa, Man. On the girl’s side, Shirin Anjarwalle of Nanaimo finished second at 13-over par, two shots behind winner Camryn Roadley of Winnipeg. Julie Ju of West Vancouver finished third and Kate Choi of Surrey placed fifth. On the boys’ side, Keaton Gudz of Victoria finished second at two-under par, two shots behind winner Peyton Callens of Langton, Ontario. Duncan’s Callum Davison was fourth at even par, while Keenan Fleming of Sechelt finished fifth at three-over.

SUPER DAVE: Two-time PGA TOUR winner Dave Barr received a well-deserved honour this past week when he was inducted into the B.C. Sports Hall of Fame. Barr, who also won on the Champions Tour, now lives in the Kelowna area and is a life member of Kelowna Golf & Country Club.

TUBB TOPS FIELD: Oliver Tubb of University Golf Club won his second PGA of BC Assistants Championship in three years this past week at Kamloops Golf & Country Club. Tubb shot rounds of 69 and 67 to finish at eight-under par. That was good for a one-shot win over Shingo Akizuki of Mayfair Lakes and Darren Griff of Morningstar.

Tubb earned $3,000. Hazelmere’s Phil Jonas repeated as senior champion. He fired rounds of 65 and 71 to beat Murray Poje of Tsawwassen Springs by three shots. Jonas earned $1,500 for the win. Tubb and Jonas are among 17 PGA of BC pros competing in this week’s $60,000 PGA of Canada Championship at Victoria Golf Club.