Billy Horschel Blown Away By Rule 20-4 At The Masters

Billy Horschel Watches Helplessly As A Gust Of Wind Takes His Golf Ball Down The Slope From The 15th Green Into The Water Hazard Below - Image Courtesy Streamable.com

Anyone watching the Masters this past Saturday likely had the opportunity to witness one of the stranger and perhaps more unfortunate incidents of the tournament...forgetting about, of course, Jordan Spieth's troubles on the 12th hole on Sunday.

The bizarre incident came on the par-5 15th hole during Saturday's 3rd round after 3-time PGA TOUR winner Billy Horschel landed his second shot just off the side of the green. His chip onto the green ran past the hole and toward the water. It did stop and Horschel rushed over to mark it, almost sensing that the wind could take over at any moment.

He started walking back toward the ball, and that's when the ball started rolling. Horschel watched helplessly as the ball trickled down the false front and into the water hazard below, having no idea what to do. 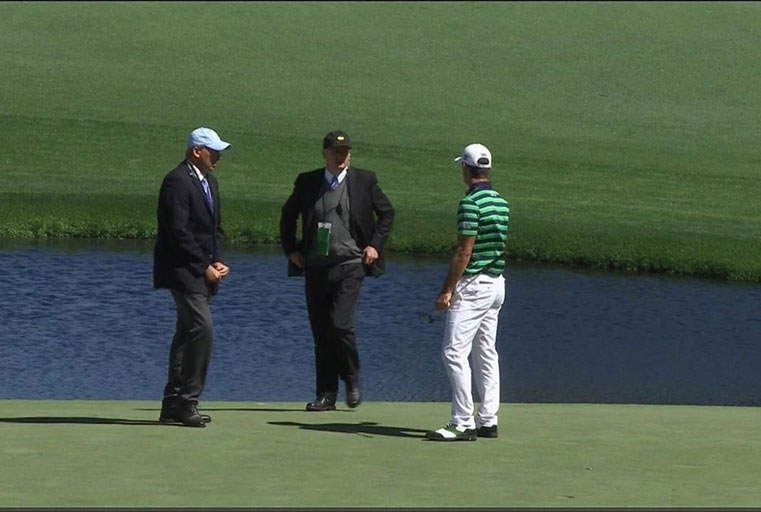 At this point, rules officials came over and informed Horschel that it was as if the last shot he had hit did go in the water. In other words, he would have to proceed under the options available to him as outlined in the Rules of Golf.

The related Decisions and Definitions are outlined below:

20-4. When Ball Dropped, Placed or Replaced is in Play

If the player's ball in play has been lifted, it is again in play when dropped or placed. A ball that has been replaced is in play whether or not the ball-marker has been removed.

A substituted ball becomes the ball in play when it has been dropped or placed.

20-4/1 Ball Replaced on Putting Green But Ball-Marker Not Removed; Ball Then Moves
Q. A player replaces his ball on the putting green but does not remove his ball-marker. Subsequently the wind moves his ball to a new position. What is the ruling?
A. Under Rule 20-4, a ball is in play when it is replaced, whether or not the object used to mark its position has been removed. Consequently the ball must be played from the new position - see Decision 18-1/12

18-1/12 Ball Replaced and at Rest Is Thereafter Moved by Wind
Q. A player replaces his ball on the putting green and the ball is at rest. Before the player addresses the ball, a sudden gust of wind blows the ball farther from the hole. The player plays the ball from its new position. Is that correct?
A. Yes. Wind is not an outside agency - see Definition of "Outside Agency." Accordingly, Rule 18-1 does not apply.

Rule 26-1 provides when a ball comes to rest in a water hazard, and the player does not want to play his ball as it lies, he has the options of 26-1a returning to where the last stroke was made, which is what Horschel did (under penalty of stroke and distance) or 26-1b - keeping the point where the original ball last crossed the margin of the hazard directly between the hole and the spot on which the ball is dropped, with no limit to how far behind the water hazard a ball may be dropped (penalty 1 stroke).

To his credit, Horschel was able to get his composure back together long enough to get his next shot close enough to the hole and make the subsequent putt for a bogey-6.

"I didn't have my scuba gear to play it from the water," joked the Florida-born Horschel, who bogeyed the hole en route to a 73 and a four-over total heading into the final round Sunday. "The course is on a fine line. A big old gust came through, my ball was a foot or two from a false front, and it started rolling and the wind kept pushing it to the false front and it went in the water.

"It's bad luck. Nothing like that has ever happened to me like that in the past that I can remember. It's not the rules officials' fault, it's not Augusta's fault, it's nobody's fault for that happening." 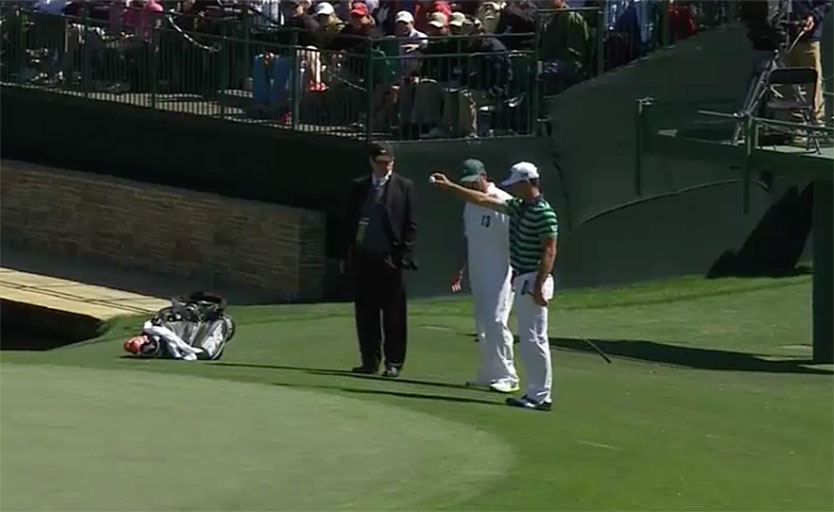 Even so, the three-time PGA TOUR winner admitted he, "expressed some frustration" to the rules official on the scene. As for the golfing Gods, Horschel had a message. "I think they owe me one," he said.

Well, apparently sometimes the golf Gods do listen. On Sunday Horschel holed out from 80 yards for an eagle 3 on the par 5 8th hole to exact at least some measure of payback.