Golf Industry Comes Together As One To Work With Government 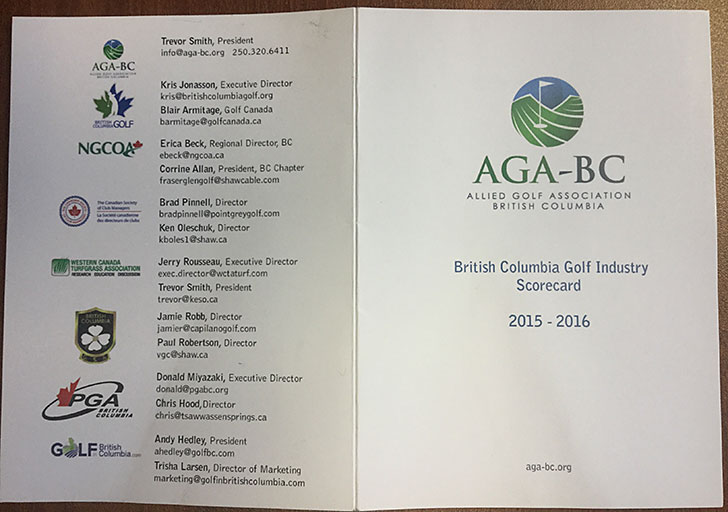 The golf industry in British Columbia has managed to get the attention of government by speaking with one clear voice. That was the message Kris Jonasson, executive director of British Columbia Golf, delivered to the association’s annual general meeting at Tsawwassen Springs.

Jonasson, who is entering his 20th year as executive director of B.C. Golf, spoke about the success the Allied Golf Association of British Columbia has had working with government. That association represents a broad cross-section of the industry, from club pros to course superintendents, course owners and club managers.

The AGA-BC was formed about five years ago and Jonasson said it has had a couple of “golf awareness days” in Victoria meeting with key government people. “We have gone and talked to politicians and we have found out some things, like the fact that they really didn’t know who we were, they had no idea how big we were and they had no idea that we are a significant contributor to the economy in British Columbia and that we employ an awful lot of people.

“To a lot of the politicians and a lot of the bureaucrats, we’re still a sport with a lot of older, caucasian men who like to wear funny-coloured pants. And they all belong to places like Capilano and Shaughnessy. And that’s not the case.”

He said the AGA-BC has had a positive response to a nine-hole scorecard it has created to grade itself. The AGA-BC has awarded itself scores in nine different areas under its economic, environment and health and wellness platforms. 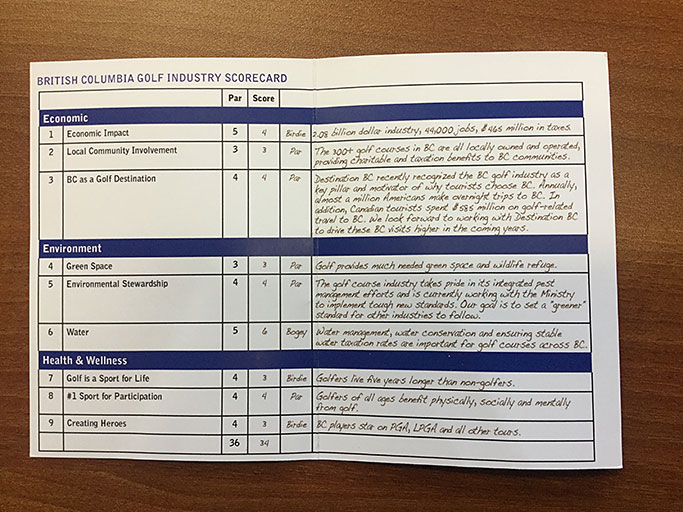 It gives itself a birdie, for example, when it comes to economic impact, noting that it is a $2-billion industry with 44,000 jobs and contributing some $465 million in taxes. There’s another birdie for golf being a sport for life. Jonasson noted that a Swedish study revealed that on average golfers live five years longer than non-golfers.

The only bogey on the card comes under the water category. “Currently, according to our calculations, we are two-under par,” Jonasson said. “In the next few years we’d like to get to six, seven- or nine-under. That is our goal. “The important thing is we are doing it with one united voice,” Jonasson said.

“This government has been very clear to us. They don’t want to hear from seven different organizations all asking for different things. ‘You come together and tell us what it is you want and why it is important and we will work with you.’ ”

The Allied Golf Association of B.C. also includes the British Columbia Golf Marketing Alliance. “This is an organization of clubs and destination areas within the province that have come together to jointly market British Columbia as a golf destination,” Jonasson said.

“They are marketing it in places like Southern California and Arizona and Toronto. And they are doing some joint marketing so that we can convince people that they should come to British Columbia and then when they come here we have seven different areas in the province. You can come for seven straight years and have a different golf experience in a different area of the province.” 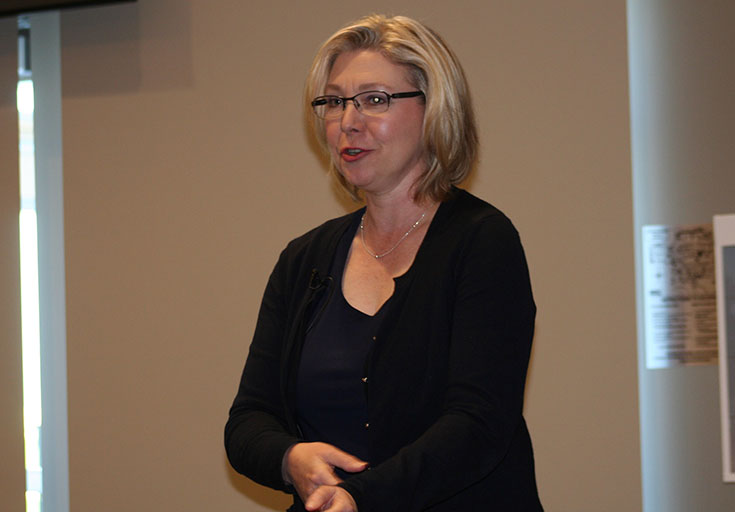 Jonasson said the response from government to the AGA-BC has been positive and that was confirmed later by B.C. Environment Minister Mary Polak, who also spoke to the AGM. “I can’t say enough about how your industry has really stepped up,” Polak said.

“You are an industry that we see as partners with us. You have done a tremendous amount to not only improve practices and in many cases be on the leading edge of practices, but you have also done so much in building awareness, educating, the partnerships that are now taking place with schools, and having people understand there is an industry they can be proud of and can welcome into their community.

“I know there are still issues, there always will be. But I really do think the industry has stepped up tremendously.”