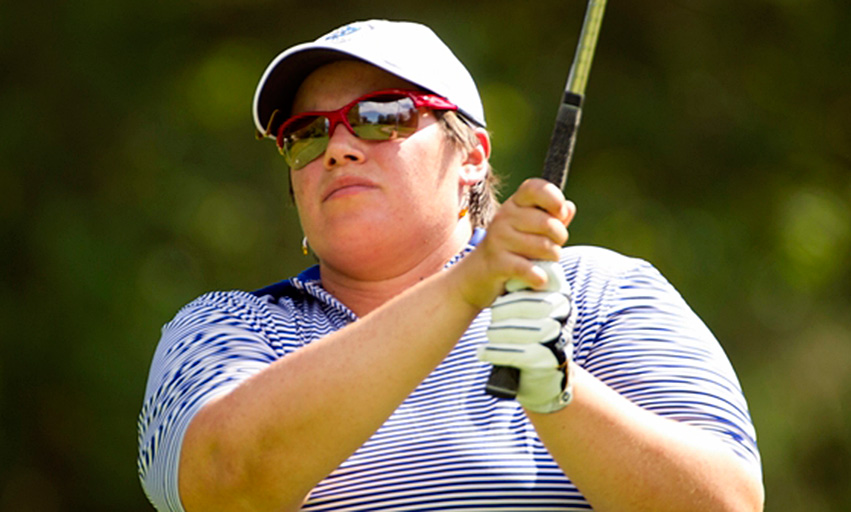 Christina Proteau Has Advanced To The Quarterfinals Of The U.S. Women's Mid-Amateur For The Second Straight Year - Image Courtesy Golf Canada

CHOUDRANT, La. – Christina Proteau, 32, of Port Alberni, B.C. advanced to the quarterfinals of the U.S. Women’s Mid-Amateur Championship, for the second straight year, which would have been hard to imagine after she shot a 15-over 87 in the first round of stroke play.

Proteau, a prosecutor for the province of British Columbia, rebounded with an even-par 72 in the second round to make match play and has posted three impressive wins.

After getting over the initial disappointment of her opening-round 87, Proteau returned determined for Round 2.

“Sunday morning, before I teed off, I had my mind made up what I was going to do,” she said. “It doesn't always work out that you get it done, but I did and after that I felt great. If I can do that, then I can do anything this week if I just stick to my own game.”

Proteau will face Paige Bromen, 29, of Minneapolis, Minn., in the quarterfinals. Bromen won the final three holes of her Round-of-64 match against fellow Minnesotan Olivia Herrick, 27, of Roseville, to advance to Tuesday. She reached the quarterfinals by defeating Lacy Shelton, 35, of Overland Park, Kan., and Kristin Paulson, 25, of Pella, Iowa, in the Rounds of 32 and 16, respectively.

Meanwhile Ashley Tonore, 38, of Monroe, La., and Kay Daniel, 44, of Covington, La., also advanced to the quarterfinals being conducted in their home state at the 6,061-yard, par-72 Squire Creek Country Club.

Both Tonore and Daniel took exciting paths to Wednesday’s quarterfinals, as Tonore won both of her Tuesday matches in 19 holes and Daniel eliminated two Women’s Mid-Amateur champions in Julia Potter (2013) and four-time winner Meghan Stasi (2006, 2007, 2010, 2012). Daniel also eliminated 2004 champion Corey Weworski in Monday’s Round of 64.

Trailing 1 down in her Round-of-32 match against Shelly Stouffer, 45, of Nanoose Bay, British Columbia, Tonore won the 18th hole with a par to force extra holes. Tonore sealed the win on the par-4 first hole with a tough two-putt down a steep ridge, while Stouffer’s chip on her third shot rolled off the other end of the green.

Tonore then seemed in control in her Round-of-16 match against Rachel Smith, 27, of Mansfield, Texas, holding a 3-up lead after 12 holes. However, Smith rallied to win 13, 14 and 17 to square the match. Tonore again headed to the first hole, where she won with a par when Smith missed a 6-footer in her bid to extend the match.

Tonore had a strong show of support from the locals, which she said helped get her through the long day.

“I love it. It's great. I think it spurs you on, gives you that adrenaline when you're playing in front of people,” said Tonore, an alumna of Louisiana State University who works in pharmaceutical sales for Eli Lilly. “I appreciate everybody coming out and showing their support.”

Daniel won the first two holes in her Round-of-32 match against Potter and never trailed en route to a 4-and-3 win. Daniel was 1 up through 10 holes, but pulled away with wins on 11, 13 and 14. Daniel then found herself in a big hole early in her match with Stasi. Stasi won the first three holes before Daniel fought back with wins on 6 and 7. Daniel was 2 down after 13, but then won four consecutive holes to stun the four-time champion.

“My first two greens were actually very well-struck irons. I hit them the way I wanted,” said Daniel, who is a practicing orthodontist. “So even though I was 3 down, I didn't feel like I was playing poorly. I have a lot of confidence in my short game, so I just had to keep grinding.”

Daniel will face Whitney Britton, 25, of Laguna Niguel, Calif., in the quarterfinals. Britton eliminated Sarah Davison, 35, a Choudrant, La., resident who lives on the Squire Creek property, in the Round of 32, and Connie Isler, 31, of Annapolis, Md., in the Round of 16.

“I missed a couple really short putts on 2 and 5 in my first match and my dad pointed out that I was too quick with my stroke,” said Shirley, the executive director of Atlanta Junior Golf. “After that, I made a nice putt on 6 to tie and then played really well on the back nine. I felt much better in the afternoon, and that showed with my play.”

The youngest competitor in the field, Lauren Greenlief, 25, of Oakton, Va., advanced to the quarterfinals via victories over Sue Wooster, 53, of Australia, 3 and 2, and Tara Jay-Connelly, 42, of Palm Beach Gardens, Fla., 4 and 3.

The final Round-of-16 match between Dani Mullin and Mercedes Huarte was suspended due to darkness with the match all square after 18 holes. That match will resume at 7:20 a.m. CDT on Wednesday on the 10th hole, with the winner facing Greenlief.

All quarterfinalists are now exempt into the 2016 U.S. Women’s Mid-Amateur at The Kahkwa Club in Erie, Pa.

The quarterfinals begin at 8 a.m. on Wednesday with the Proteau-Bromen match. The semifinals will also be conducted on Wednesday, and are scheduled to begin at 1 p.m., as the field is cut to two for Thursday’s 18-hole final.

The 2015 U.S. Women’s Mid-Amateur Championship is open to female amateur golfers with a Handicap Index® not exceeding 9.4. It consists of 36 holes of stroke play followed by six rounds of match play, with the championship scheduled to conclude with an 18-hole final on Thursday, Oct. 8.

The U.S. Women’s Mid-Amateur Championship is one of 13 national championship conducted annually by the United States Golf Association, 10 of which are strictly for amateurs.

RESULTS: (from Tuesday afternoon’s third round of match play at the 2015 U.S. Women’s Mid-Amateur Championship)

Pairings for Wednesday’s quarterfinal round of match play at the 2015 U.S. Women’s Mid-Amateur Championship, being conducted at the 6,061-yard, par-72 Squire Creek Country Club (all times CDT):

8:20 a.m. – Lauren Greenlief, Oakton, Va. (149) vs. TBD (The final quarterfinalist will be determined when Mercedes Huarte and Dani Mullen complete their extra-holes match on Wednesday morning)