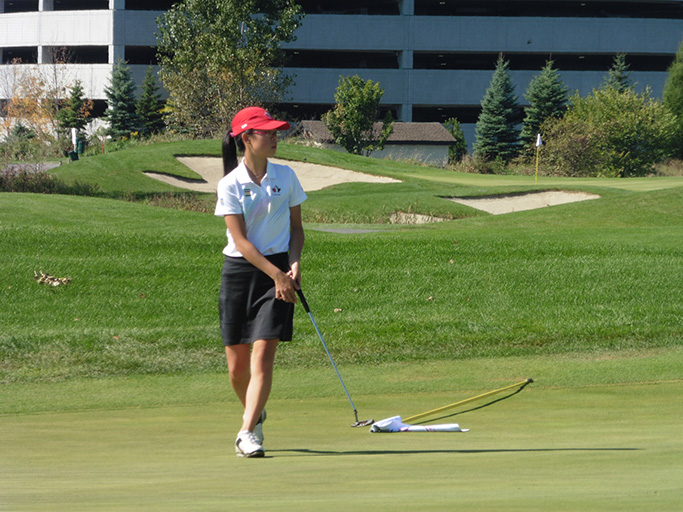 The sun was shining, but when the wind picked up, it blew up the scores of the six Canadian girls playing in the World Junior Girls Championship at The Marshes in suburban Ottawa.

The best Canadian scores came from Vancouver’s Tiffany Kong and Coquitlam’s Euna Han, who each carded (+3) scores of 75. Kong is on Team Canada 1 and her teammates Hannah Lee of Surrey, at (+5) 77 and Grace St-Germain of Orleans, ON, at (+6) 78, were also undone by the winds, which blew entirely differently than during their practice rounds on Sunday and Monday.

The leaders of the tournament are Hye-jin Choi of South Korea and Elizabeth Wang of the United States, both at (-2) 70, one stroke ahead of Italy’s Carolina Caminoli, who carded the only other under-par round on the day, a (-1) 71.

Kong had the best finish, with birdies on her final two holes. She had a roller-coaster round, with four birdies, five bogeys and a double bogey on the par-3 third. “When the wind started picking up, I had trouble keeping my drives straight,” said Kong. “I also missed a few putts, so I have things to work on. I definitely had a lot of fun, meeting new people and playing in this tournament.”

Han also made a nice recovery after making bogeys on five of her first six holes. Han, whose mother flew out to support her, made back-to-back birdies at 13 and 14, and made pars the rest of the way in to lead Team Canada 2. “I had a bunch of putts that lipped out or were on the edge,” said Han. “I also have to work on my chipping. I’m happy I played better on the back.”

Lau had the most amazing round of any of the 44 players who teed it up. The Richmond native made five birdies and two bogeys to go along with 7 pars on 16 of her holes. Unfortunately for Lau, she made an 8 on the par-5 2nd and a 9 on the par-5 16th. The latter was particularly tough because it came after Lau had fought back to get under-par for her round.

“After I made the 8, I tried to focus on trying to get it back and I was happy I did that,” said Lau. “But then I made a big number and even though that wasn’t good, I played 16 pretty good holes. I just have to get rid of those two bad holes.”

Lee also struggled, making six bogeys and just one birdie for her round of 77. Lee knows exactly what she needs to work on. “I got in the bunker five times and I didn’t get up and down on any of them,” said Lee. “I have to go work on that and also on my chipping.”

Chan was the first Canadian to finish and had only one birdie on the day. “I had a lot of chances but I couldn’t make any putts,” said the Richmond native. “This is probably the biggest tournament I’ve played in and I definitely felt the pressure. My hands were shaking for the first couple holes and then I calmed down and I had fun the rest of the day.”

St-Germain knows a little something about pressure, as she’s the hometown favourite with the largest galleries following her. “Probably half the people following me were my friends and family. It was a tough day and my putting let me down today,” said St-Germain. “Tomorrow, I’ll be better.”

Round 2 of the 72-hole tournament starts at 8 a.m. Wednesday.

For full scores from The Marshes, please click here: