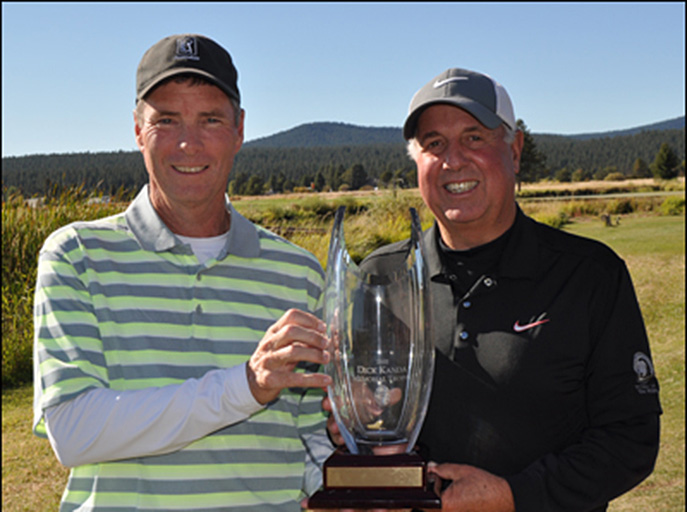 The championship was held at Sunriver (Ore.) Resort, and was conducted by the Pacific Northwest Golf Association (PNGA).

Tied for the lead going into today’s final round with the team of Don Orrell of Bend, Ore. and Jason Pigot of Redmond, Ore., Taylor and O’Donnell turned in a bogey-free scorecard, 5-under-par 66 on the resort’s par-71 Meadows Course to win the title by a single shot over Orrell and Pigot.

The two teams, playing together in the final round, were tied for the lead until Orrell and Pigot bogeyed the par-3 16th hole to fall one shot back. The teams then traded birdies on the par-5 17th hole and pars on the par-4 18th.

Tied for second with Orrell and Pigot was the team of Rob Matson of Wenatchee, Wash. and Bill Bradley of Issaquah, Wash., who played a flawless, bogey-free final round 7-under-par 64, coming up just one stroke short.

“It’s great to win a PNGA event,” Taylor said. “I’ve wanted to play in as many of these as I can, and I’m fortunate to partner-up with someone the caliber of Pat. I can provide a lot of pars and he provides a lot of birdies.”

Said O’Donnell, “We play a lot of golf together. Denny has a really great short game. We don’t get into a whole lot of trouble, and if we do I can always rely on him to put it close and give us a chance.”

In 2009, O’Donnell had been named the PNGA Senior Men’s Player of the Year, a year in which he also qualified for the U.S. Senior Amateur. Earlier this summer he won the Oregon Senior Amateur, the fourth time he has won that championship.

Taylor is a member of the PNGA Board of Directors. Both men play out of Arrowhead Golf Club in Molalla, Ore., and have regularly earned a spot to represent Team OGA in the annual PNGA Cup.

The defending champions from British Columbia, Burnaby’s John Gallacher and Port Moody’s Gudmund Lindbjerg were a solid 4th with a total of 12-under par just 3 shots back. Only one behind them was another B.C. team, Lance Lundy of Pemberton and Norm Bradley of Kelowna, who had held the first round lead after coming out of the gate with a 7-under 65.

The championship consisted of 54 holes, with the first and third rounds being played in a Four-Ball stroke play format, and the second round was played in the Chapman format.

In the women’s competition the duo of Lisa Smego of Olympia, Wash. and Ginny Burkey of Eugene, Ore. successfully defended their title by winning the 33rd Pacific Northwest Women’s Senior Team Championship. 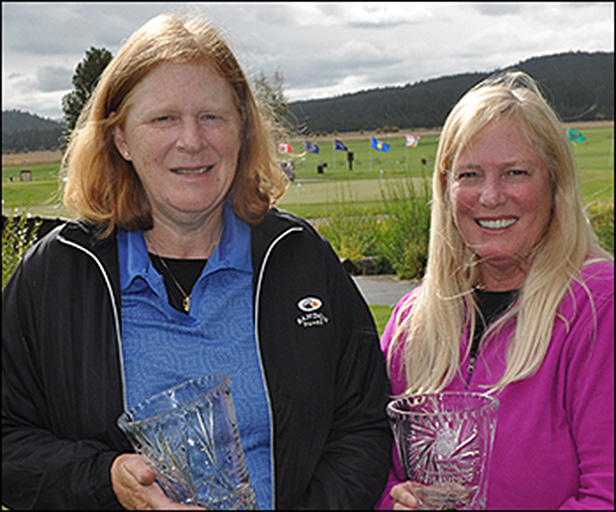 Smego and Burkey had paired together last year in winning the championship. They won by 16 strokes last year and 22 strokes this year.

North Vancouver’s Kathryn McGarvey partnered with Robin Cole of Ellensburg, Wash. to take second place, albeit well back of the winners.

Meanwhile the the B.C. pairing of Jackie Little from Port Alberni and Melanie Grant of Kelowna had to DQ themselves following their opening round of 70 that had them in second place just 3 shots back of the eventual runaway winners when they realized they had signed for a lower score than they actually had.

Both had thought they made a four on the 3rd hole but realized later they had being thinking of the wrong hole. Being the honest competitors they are the two brought it to the attention of the officials and gracefully bowed out.

Burkey has now won this event six times. She won four in a row with Loree McKay (2008-11), and then 2014 and 2015 with Smego. Her sixth victory surpassed Pat Harrop-Schumacher of Sequim, Wash., who has five titles from 1991-2001. Harrop-Schumacher still plays in the event every year, finishing tied for 16th this year with partner Sharon Johnston of University Place, Wash.

“We’ve known each other since college,” said Smego of Burkey. “So we enjoy playing with each other. This year, when we got here, our goal was to improve on what we did last year, and I think we did that.

It was a fun week. We got Ginny her record-breaking sixth win. I still enjoy team events. I’m pretty much retired from amateur golf because of my back surgery, but I still try to play in the team events.” Smego had been named the 2013 PNGA Senior Women’s Co-Player of the Year.