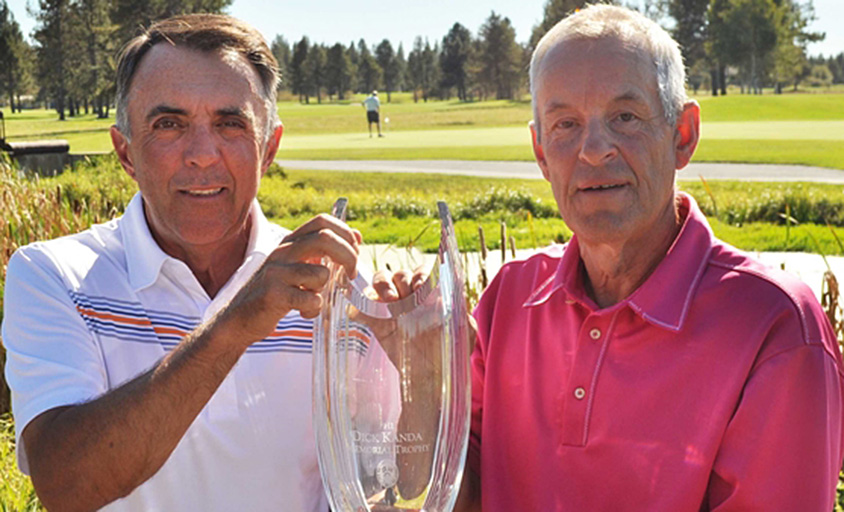 Both championship fields will be separated into three equal flights based on the team handicap.

The championships are being conducted by the Pacific Northwest Golf Association (PNGA).

John Gallacher of Burnaby, B.C. and Gudmund Lindjberg of Port Moody, B.C. won last year’s Senior Men’s Team Championship by three strokes after posting a 5-under par 66 in the final round to beat the team of Carey Watson and Tom Carlsen and the team of Don Orrell and Charles Griswold, all from Bend, Ore.

Gallacher and Lindbjerg are in the field to defend their title. The duo have played as a team in this championship for more than a decade.

Also in the field will be the team of Bill Hood of Beaverton, Ore. and Charles Griswold of Bend, Ore. Hood teamed with Dick Shafer in 2008 to finish as co-champions. The 2012 champions, Paul Houvener of Mill Creek, Wash. and Rob Matson of Wenatchee, Wash., will be competing this year although they will be playing on separate teams.

The 2011 champions, Steve Berry of Vancouver, B.C. and Lance McGregor of Delta, B.C., will be teaming up together, as well as the 1997 champions Al Reinikka of Bellingham, Wash. and Bill Roland of Spring Hill, Fla.

For more information on the PNGA Men’s Senior Team, including pairings, news, and more, click here.

Last year’s Women’s Senior Team Championship saw the pairing of Ginny Burkey of Eugene, Ore. and Lisa Smego of Olympia, Wash. dominate the field with a 16-stroke victory. This was the first time Burkey and Smego had joined forces as a team, but both had experienced winning this event with other partners in the past.

Smego won in 2012 with Karen Brannon as her teammate while Burkey won four consecutive times from 2008-2011 with Loree McKay as her teammate. The 2014 victory gave Burkey her fifth PNGA Women’s Senior Team Championship title, tying her for the most wins in this event with Pat Harrop-Schumacher of Sequim, Wash.

This year’s field features some strong players including the team of Burkey and Smego looking to defend their title; the 2013 champions, Jackie Nelson of Hillsboro, Ore. and Mary Sias of Portland, Ore.; and the 1995, 1996, and 2001 champions, Pat Harrop-Schumacher and Sharon Johnston of University Place, Wash.

British Columbia is also well represented by the team of Port Alberni's Jackie Little with Kelowna's Melanie Grant. Also in the field from B.C., although not paired together, are North Vancouver's Kathryn McGarvey and Victoria's Leslie Crawford

For more information on the PNGA Women’s Senior Team, including pairings, news, and more, click here.

Players will be coming from all parts of the region, including Oregon, Washington, Idaho, British Columbia, Alberta, as well as from California and Florida.
Entrants into this championship must be 50 years of age or older by the start of the championship.

The PNGA was founded on February 4, 1899. It is a 501c3 charitable, international, amateur golf association dedicated to preserving the true spirit of golf by supporting its allied associations, conducting quality championships, and promoting activities beneficial to golfers in the Pacific Northwest.

For more than a century, the Association has been a pioneer in developing competitions and services and its mission has grown and evolved. Today, the PNGA remains committed to being a truly regional organization providing benefits and services to its members and member clubs throughout the Northwest.