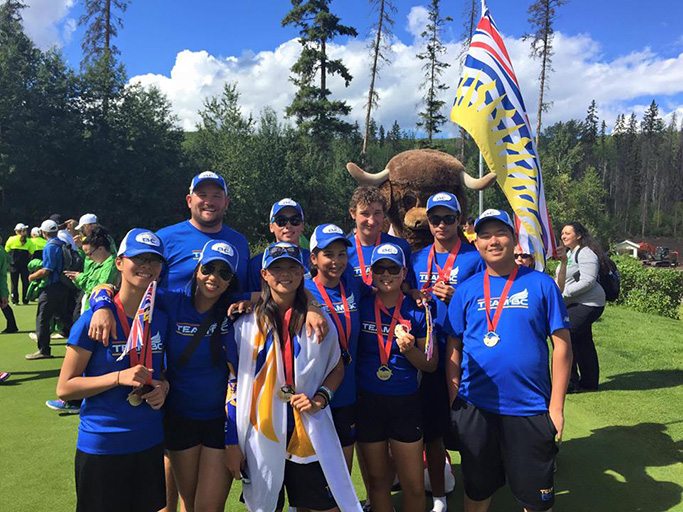 It was almost a complete British Columbia sweep of the six Team Canada spots for the 2015 World Junior Girls Golf Championship in Ottawa later this month.

The event, which runs Sept. 20-25 at The Marshes Golf Club, sees three-player teams competing in 72-hole team and individual competitions. Because Canada is the host country, it can field two teams and BC players are front and centre for both squads.

In fact, BC could have had a clean sweep of both squads, but Canadian Junior champion Michelle Kim and third-place finisher Naomi Ko are both starting their collegiate seasons, at Idaho and North Carolina State respectively. 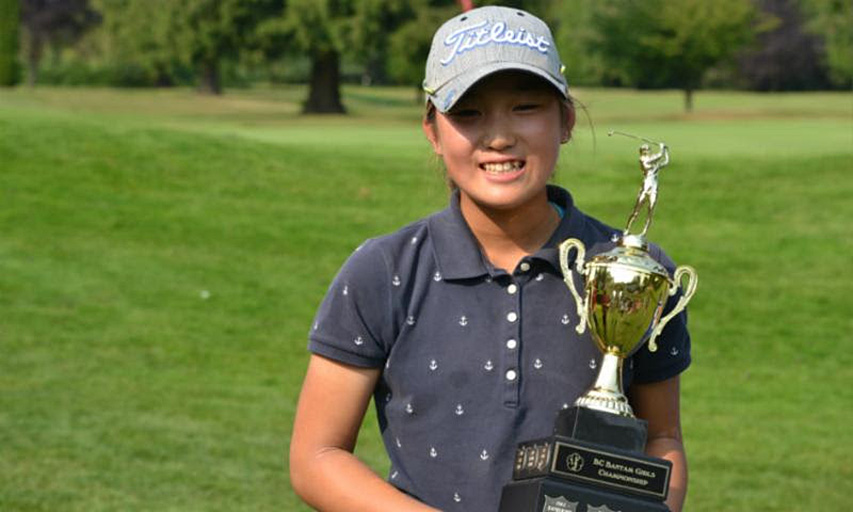 Debbie Pyne, British Columbia Golf’s director of player development, was elated to have so many local players make the team and she got her wish of having at least one of the two teams consisting of all BC players.

The two teams will be coached by Team Canada’s Ann Carroll, who already has experience working with St-Germain and Lau.

Of the six team members, Lee has had the most consistent season, coming second at the British Columbia Juvenile Championships, third at the BC Junior Girls, T7 at the BC Women’s Amateur, second at the Canadian Junior Girls – to go with her Canadian Juvenile title at the same event – along with a gold medal in the girls competition at the Western Canada Summer Games in Wood Buffalo, AB.

“I’m pretty happy with how my summer has gone,” said Lee. “I came back from the Canadian Juniors pretty confident and I took that to the Western Canadians.”

Kong also has had an impressive 2015 season, playing her way onto the BC team for the Western Canada Summer Games with a solid performance at the CN Future Links at Pheasant Glen in May.

Kong parlayed that into a fourth place finish at the BC Junior Girls before a T6 at the Canadian Junior Girls. Her August was one to remember because Kong won a team gold and individual silver at Wood Buffalo.

Hours after flying back from Alberta, Kong teed it up at Pitt Meadows for the CP Women’s Open Monday qualifier. She shot an even par round, then survived a 3-for-2 playoff to get into the main tournament at The Vancouver Golf Club later that week.

“I thought it was just going to be a one-day tournament,” said Kong, who was happily surprised to get another two rounds, but this time with the best female golfers in the world.

Kong couldn’t believe her good luck in meeting some of her favourite golfers. “I shook hands with Brooke Henderson, I met SooBin Kim, I met Inbee Park,” said Kong. “I wasn’t that nervous. I was here for the atmosphere and the experience.”

Kong missed the cut at (+9) 153, but she gained experience at the highest level of women’s golf so she won’t be fazed by anything she sees in Ottawa.

St-Germain started the year with a win at CN Future Links Pacific Championship, in a playoff over Michelle Kim, after helping Team Canada to a third-place finish in the inaugural World Junior Girls Golf Championship at Angus Glen in 2014. 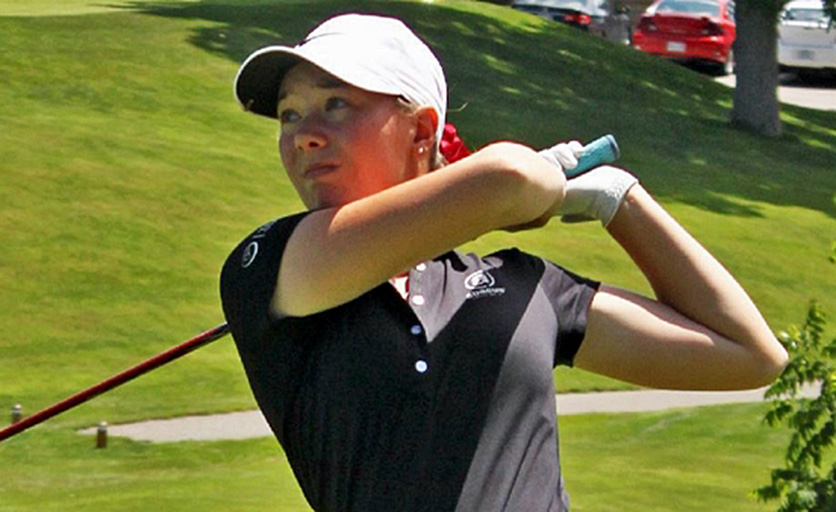 Canada’s second team in Ottawa is anchored by Lau, who admits she’s had a tough season, highlighted by a withdrawal from the Canadian Junior Girls in Saskatchewan after a bout of food poisoning.

Lau said she’s had a litany of injuries this summer, pointing to her knee, back and elbow. “It’s been tough,” said Lau, who admits she hasn’t been as good as last year’s results, but she understands golf is about weathering the ups-and-downs and trying to remain patient even when the results don’t come. Lau also changed coaches in the last year, and has been adapting to those changes.

Lau’s 2015 results include winning the CN Future Links Prairie Championship earlier this summer and a T3 at the BC Women’s Amateur, but as a good teammate, she knows that now is also a time for playing against girls her own age and having fun while still competing hard.

That’s why she’s happy to be playing alongside two good friends, Kathrine Chan and Euna Han, who all have something in common: they’ve all won the BC Bantam Girls championship, with Chan winning in 2012, Lau in 2013 and Han in 2014.

Han, who just turned 13 in August, notched five top-six finishes this summer, including a third-place finish in the juvenile division of the Canadian Junior Girls Championship and a T6 at the BC Junior Girls at Cordova Bay. 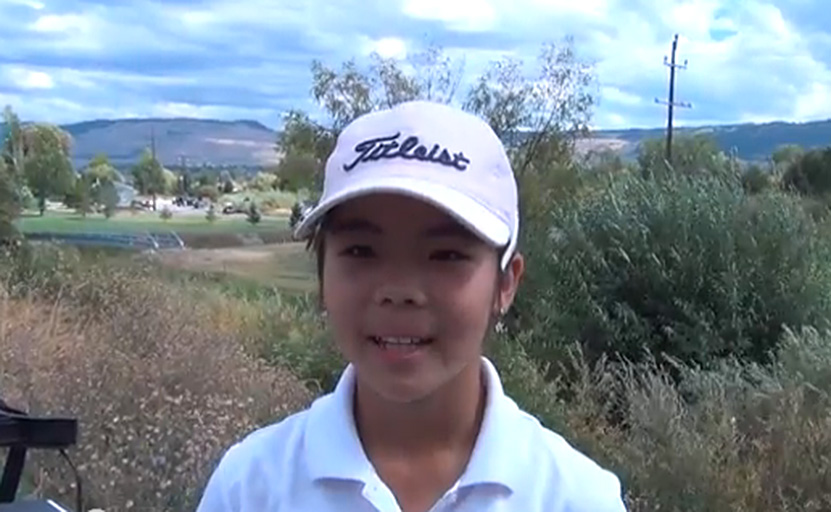 Kathrine Chan Was The 2012 BC Golf Bantam Girls Champion

Han is the most reserved of the three, but you can expect that the always smiling Chan and Lau will bring out the best in both Han’s personality and golf game as they play together as a team in Ottawa.

“The performances of Canada’s junior female athletes as a whole have been very strong this year, which made this selection process far from simple. That difficulty speaks to the wealth of golfing talent that Canada possesses. We look forward to seeing this group learn and grow in international competition.”

“The Marshes Golf Club is in great shape and we are excited to once again bring the world’s talented players to Canada,” said Tournament Director Mary Beth McKenna. “It is a true honour to be selected to represent your country and we know that all the athletes from across the globe will want to perform their best in this event.”

Team USA claimed team honours and Beverly Hills, CA, native Mika Liu finished atop the leaderboard in the individual competition of the 2014 competition at Angus Glen.

In addition to the 72-hole team and individual competitions, the World Junior Girls Championship will be a celebration of the sport with a specific focus on the growth and development of the game. Golf Canada will host a Canadian Sport Institute Ontario (CSIO) coaching summit and a girls’ skill development clinic in the lead-up to the tournament.