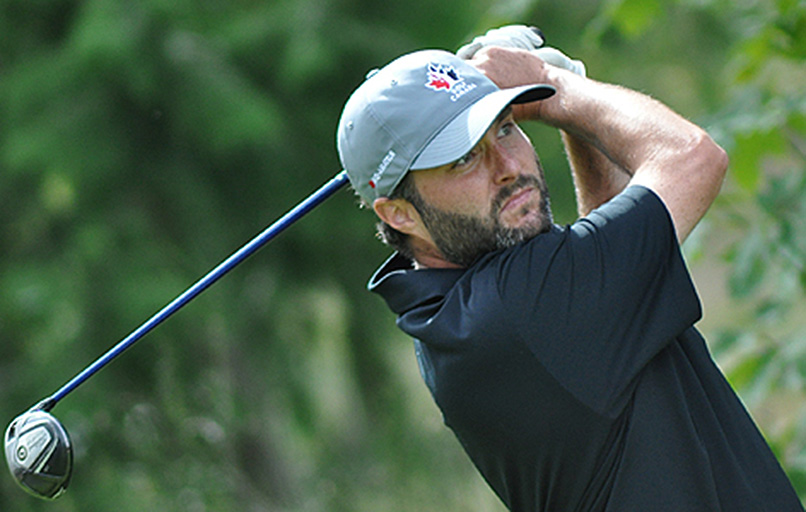 Brent Wilson Of Cobble Hill On Vancouver Island, BC Was The Come-From-Behind Winner In The PNGA Men's Mid-Am At Bear Mountain, Making It Basically A Home-Town Victory - Image Courtesy PNGA

Victoria, B.C. – Brent Wilson of Cobble Hill, B.C. shot a final round 1-under-par 70 to come from behind and win the 31st Pacific Northwest Men’s Mid-Amateur Championship.

The 54-hole stroke-play championship was held on the Valley Course at the Westin Bear Mountain Resort in Victoria, B.C., and was conducted by the Pacific Northwest Golf Association (PNGA).

Wilson, 33, had started the day a shot behind co-leaders Erik Hanson of Kirkland, Wash. and Rob Olson of Victoria, B.C.

With all three players paired together in the last group in the day's final round, Wilson had his work cut out for him, with Hanson already having won the 2015 Pacific Northwest Master-40 Championship, and Olson perhaps having an edge, being the current club champion at Bear Mountain.

Wilson had stumbled in the championship’s opening round, shooting a 5-over-par 76. “I was just thinking, get back into red numbers and maybe I can get into one of the last couple of groups for the last round,” he said. He did that and more in the second round when he started eagle-birdie-birdie and never looked back, blistering the course for a 6-under-par 65 to vault into contention, setting up the stellar final round.

“It means a lot to me, personally,” he said, when asked what this win means to him. “This is the biggest event I’ve ever won. And to do it in my home town and in front of friends and family, it’s a great feeling. I was definitely hitting the ball well all week, hitting a lot of fairways and greens. I thought I was going to have to go a little lower today (to win), but when I saw Erik and Rob struggling on the front nine, and I knew I just needed to make pars and I’d be okay.”

Hanson and Olson both struggled in the final round, and Wilson took command of the championship. He was the only player in the field to finish under par, finishing four shots ahead of Olson, who came in second.

A member at Victoria’s Gorge Vale Golf Club, Wilson has been a consistent contender in the region’s amateur championships, qualifying for Team BC in the 2012 PNGA Cup and representing British Columbia in the 2014 International Amateur Championship in Lima, Peru.

Last week he competed in the Canadian Mid-Amateur Championship in Nova Scotia. This is the first PNGA championship that Wilson has competed in as an individual.

For complete final results, visit www.thepnga.org. To stay connected on social media, follow @PNGALIVE on Twitter and use the hashtag #PNGAMensMidAm.