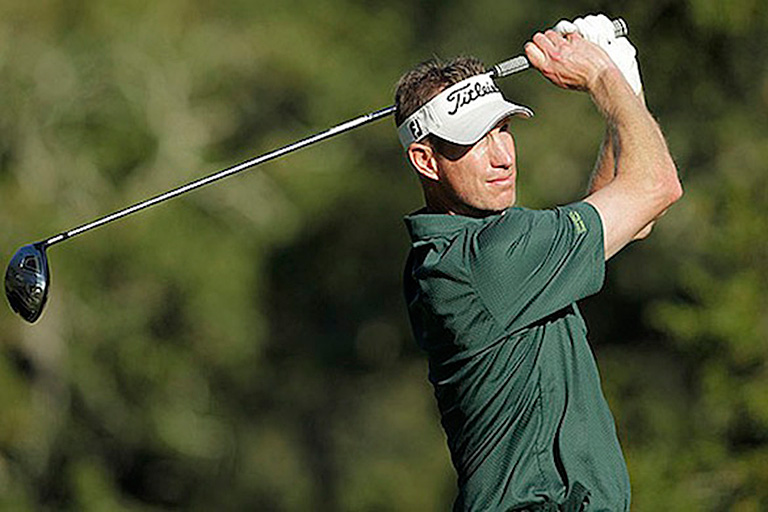 Erik Hanson (Above) Of Kirkland, Washington Heads Into The Final Round Of The PNGA Men's Mid-Amateur Tied With BC's Rob Olson - Image Courtesy PNGA

Erik Hanson of Kirkland, Wash., and Rob Olson of Victoria, B.C. will head into the final round of the 31st Pacific Northwest Men’s Mid-Amateur Championship in a tie for the lead at two-under-par 140 after round two.

The Championship, taking place at Bear Mountain Golf Resort’s Valley Course is a 54-hole competition and is being conducted by the Pacific Northwest Golf Association (PNGA).

Hanson, champion of this event in 2002 is having a great season. So far in 2015, he has won the PNGA Men’s Master-40 Amateur Championship, won the Seattle City Amateur, and qualified for the U.S. Senior Open.

Olson got off to a hot start in the morning, making eagle on the very first hole on his way to an outward nine score of four-under-par 31. Olson made three bogeys on the back nine, a trend that occurred throughout the day as weather became a factor.

Joining Hanson and Olson in the final pairing is another B.C. golfer, Brent Wilson of Cobble Hill. Wilson stole the show when he shot five-under-par 30 on the front nine. Wilson also made eagle on the first hole, and followed that up with back-to-back birdies. He kept his card clean on his way to a tournament-low six-under-par 65.

As the conditions worsened throughout the day with rain and wind, scores began to rise. In fourth place alone is Michael McAleer of Vancouver, B.C. at even par. McAleer shot three-under-par 68 in round one, but followed with a three-over-par 74 today.

Also shooting 68 yesterday but falling back slightly was Sean Fallows of Edmonds, Wash., who joins Michael Kloenne of West Linn, Ore., and Kevin Carrigan of Victoria, B.C. in a three-way tie for fifth place at two over par, four strokes behind the leaders.

Carrigan has won the award of Pacific Northwest Men’s Mid-Amateur player of the year in the last three consecutive years.

For tee times, pairings and to follow along with live scoring, visit the Men’s Mid-Amateur page.

To stay connected on social media, follow @PNGALIVE on Twitter for live updates and much more, and use the hashtag #PNGAMensMidAm.