BC's McAleer, Doell Tied For Lead After Round One Of PNGA Men’s Mid-Amateur 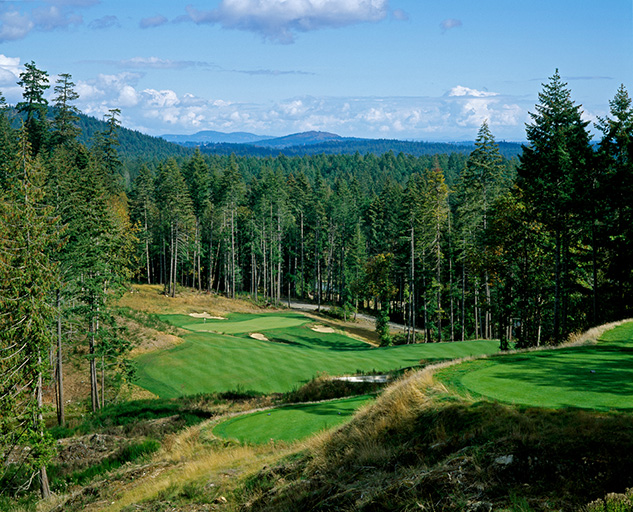 The 2015 PNGA Men's Mid-Amateur Is Being Held At Bear Mountain's Valley Course In Victoria, BC - Image Courtesy Golf Canada

Sean Fallows of Edmonds, Wash., Michael McAleer of Vancouver, B.C., and Craig Doell of Victoria, B.C. share the lead after the first round at three-under-par after each posted scores of 68 on the par-71 Valley Course.

Fallows got off to an impressive start, birdying four of his first seven holes. He made bogey on the par-4 8th hole and finished the front nine with a three-under-par 32. Two birdies and two bogeys on the back lead to an even-par 36 on the inward nine.

McAleer made birdie on four of his final seven holes to card a three-under-par 33 on the back side and get himself into a share for the lead.

Doell, champion of this event in 1999 and 2004 nearly kept his card clean, making only a single bogey on the difficult 13th hole, and adding four birdies to put himself in contention for a third title in the championship.

Other notable scores after round one include Erik Hanson, champion in 2002 and winner of this year’s PNGA Men’s Master-40 is just one back of the trio in the lead at -2 69. Rob Olson of Victoria, B.C. and Michael Kloenne of West Linn, Ore. are three strokes back at even-par 71.

Michael Moore of Vancouver, B.C. carded a hole-in-one today when he made a slam-dunk ace on the sixth hole. Moore hit a low 7-iron on the downhill, 173-yard par three to record his third career hole-in-one.

For tee times, pairings and to follow along with live scoring, visit the Men’s Mid-Amateur page.

To stay connected on social media, follow @PNGALIVE on Twitter for live updates and much more, and use the hashtag #PNGAMensMidAm.