The final British Columbia Golf tournament of the year saw Sean Buckles and Karen Zhang crowned as BC Bantam champions, while Bryan Lee earned the BC Novice Boys title at Two Eagles Golf Course and Academy in West Kelowna.

The 36-hole tournament was played under grey skies, as winds carried smoke from American wildfires into the Okanagan.

On the boy’s side, 14-year-old Buckles of Seymour Golf & Country Club broke out of a pack of five players who started the day as co-leaders at (+1) 66 to win the Bantam Boys title by two strokes over Jeevan Sihota of Gorge Vale Golf Club.

The tournament was decided on the 174-yard par-3 17th, where Buckles hit a gorgeous 8-iron to five feet, canning the birdie putt to take the lead. Sihota, playing in the same group, had to hit 5-iron, where he could only make bogey. “I knew it was close coming down the stretch and I was nervous on that tee, but I just focused and hit the shot,” said Buckles. “I stuffed it, so I was pretty happy.”

Sihota, only 11, said he was pleased he hung on for a runner-up finish. “I was right in it until the last hole,” said Sihota. “Sean played great today and he deserves to win this. I’m happy for him.”

Thoroughgood made a spirited run, including four birdies on his front nine. But overswinging on the 10th hole led to a double bogey, which derailed the Victoria native’s charge.

“I knew I had to go really low, maybe (-4) and I got it to that after nine,” said Thoroughgood. “My ball striking was pretty good, hitting it to five and six feet on the front, but the double on 10 really hurt me.”

Buckles’ name now goes on the Harry White Trophy, which he knows is very significant. “I know Adam Svensson won this and I saw him on TV playing the Canadian Open and I know Eugene Wong’s name is on it, so yes, I know it is pretty special,” said Buckles. “I’m also pretty happy that Bryan (Lee from Seymour) won the Novice boys. We’re taking some trophies back to our club and our coach Colin (Lavers).”

On the girl’s side, Karen Zhang of Quilchena Golf & Country Club shot a (+1) round of 66 to go with her opening round (-2) 63 to finish at (-1) 129 for the tournament. Zhang had entered the final round with a one stroke cushion over Victoria’s Akari Hayashi, but Hayashi couldn’t make up any ground, making no birdies on the day en route to a (+2) round of 67 and (+1) 131 for the tournament.

Claire Lovan of Eaglequest Coyote Creek and Julie Ju of Seymour Golf & Country Club finished T3 at (+3) 133. “I am excited to win this title,” said Zhang. “I hit a lot of good approaches today and I missed some putts, but I’m happy I held on.” 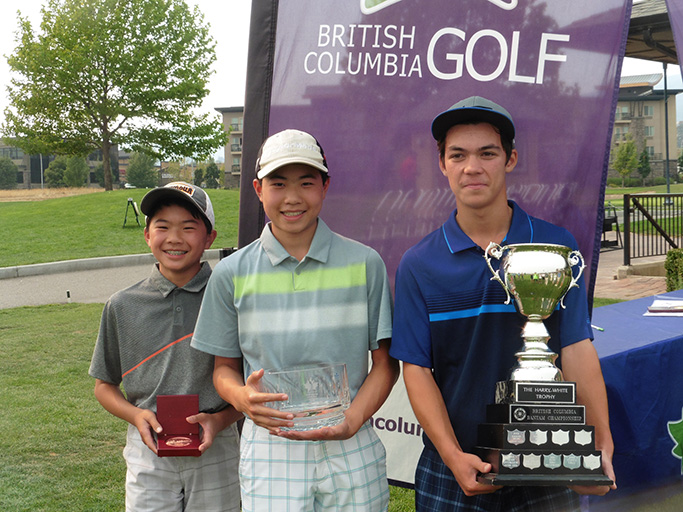 James Lee Won The Bronze Medal In The BC Novice Boys, Bryan Lee Won The Bc Novice Boys And Sean Buckles Won The BC Bantam Boys Championship At Two Eagles. All Three Are Junior Members At Seymour Golf & Country Club, Working Under Colin Lavers

Hayashi, 12, couldn’t get anything going at all on the front nine, making a bogey on the fifth to finish the front nine at (+1) 33. It wasn’t much better on her back, as the youngster lamented her lost opportunities.

“I’m so sad I didn’t make any birdies today,” said Hayashi. “I did have a lot of fun playing with Karen and I cheered for her to win because it’s her last Bantam and she played so well.”

Best of all for Zhang, she now gets to proudly show off her Titleist 2015 Champion’s bag. “That’s a pretty nice prize to get,” said Zhang. “I’m pretty happy.”

The Novice division was added to the Bantam in 2014 for competitors with less experience in provincial competition.

Bryan Lee of Seymour Golf & Country Club finished with three birdies and 45 points in the Stableford scoring system during the final round to win the Novice Championships by seven points over Xander Bankes of Rossland.

“I’m pretty excited right now,” said Lee. “This is the first big win for me and the first British Columbia Golf tournament I’ve played in. I’m glad I pulled it out at the end.”

Lee finished in style, canning a 30-foot birdie putt on the last hole to win going away.

The 2016 BC Bantam and Novice Championships will be contested at the Bowen Island Golf Course next August.