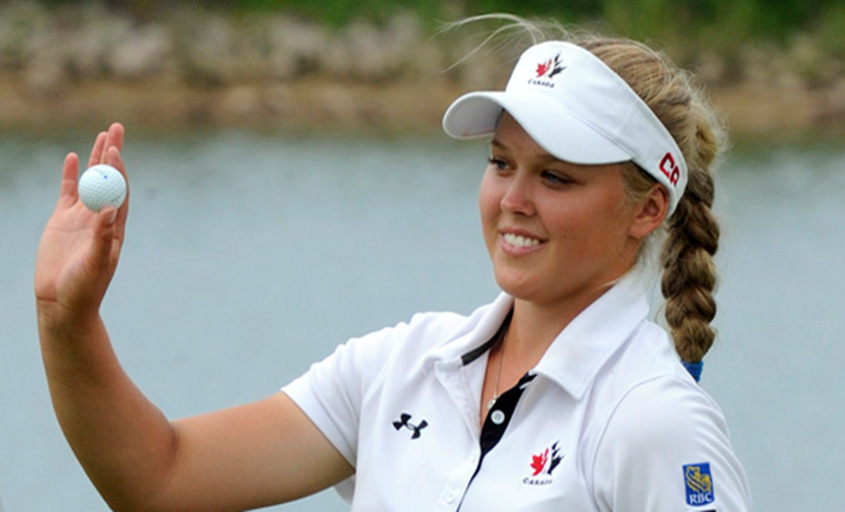 (Scotland) July 1, 2015 - The 2015 Ricoh Women’s British Open field is set to be strongest and most international Major of the year as entries have now closed for this year’s Championship at Trump Turnberry Resort, Scotland, July 30 to August 2.

Seventeen year old Canadian Brooke Henderson, who turned professional at the end of 2014 and, with only limited playing rights, has had an impressive professional debut year and stormed up the rankings, currently sitting at No.46 on the Rolex Rankings. All this has led to the Championship Committee awarding her a special exemption into the 2015 Championship.

Henderson commented, “I am so excited to play in my first Ricoh Women’s British Open and I am very grateful to the Championship Committee for granting me this opportunity. I played in the 2012 Ladies British Amateur at Carnoustie and I absolutely loved visiting Scotland so I am super excited to be heading back there again.

I really enjoyed the different challenges of playing links golf in Scotland and, now that I have gained a little more experience, I think I will enjoy it even more. I can’t wait to get to the Trump Turnberry Resort.”

Mo Martin, the 2014 Champion, has the tough task of defending her title against a field including all of the world’s best players. The entry list reads like a who’s who of women’s golf and includes World No.1 Inbee Park, World No.2 Lydia Ko, World No.3 Stacy Lewis, World No. 12 Lexi Thompson, defending U.S. Open Champion Michelle Wie, Ricoh Ambassadors Paula Creamer and Charley Hull, Scotland’s Catriona Matthew, the 2009 Champion and English legend Dame Laura Davies.

The star-studded field is also the most international of the five women’s majors with 23 nationalities already represented in the field to be finalized at the conclusion of final qualifying on Monday 27th July at Irvine Golf Club. Australian veteran Karrie Webb won the Women’s British Open in 2002 when the Championship last visited at Turnberry.

The Ricoh Women’s British Open was founded by the LGU in 1976 and is staged in conjunction with IMG, the world’s largest sports marketing company, since 1984. The event has been co-sanctioned by the LPGA and LET since 1994 and gained Major status in 2001.

Ricoh, a global technology company specializing in office imaging equipment, production print solutions, document management systems and IT services, has been the title sponsor of the Ricoh Women’s British Open since 2007.

About the Ladies’ Golf Union (“LGU”)
Founded in 1893, the LGU is the encompassing body for ladies’ amateur golf in Great Britain & Ireland. The LGU Executive Council includes representatives of ladies’ golf’s national governing bodies in England, Ireland, Scotland and Wales. Operational activities are undertaken by a wholly owned subsidiary, LGU Championships Limited (“LGUCL”), which in particular owns and runs the Ricoh Women’s British Open, founded by the LGU in 1976 and one of the five Major Tournaments for Professional Women golfers. LGUCL also has responsibility for running British Amateur Championships and Home International events, and preparing the Great Britain & Ireland teams for representative matches, such as the Curtis Cup and the Vagliano Trophy. Further information about the LGU is available on www.lgu.org.

About Ricoh
Ricoh is a global technology company specializing in office imaging equipment, production print solutions, document management systems and IT services. Headquartered in Tokyo, Ricoh Group operates in about 200 countries and regions. In the financial year ending March 2015, Ricoh Group had worldwide sales of 2,231 billion yen (approx. 18.5 billion USD). The majority of the company's revenue comes from products, solutions and services that improve the interaction between people and information. Ricoh also produces award-winning digital cameras and specialized industrial products. It is known for the quality of its technology, the exceptional standard of its customer service and sustainability initiatives. Under its corporate tagline, imagine. change. Ricoh helps companies transform the way they work and harness the collective imagination of their employees. For further information, please visit www.ricoh-europe.com

About IMG
IMG is a global leader in sports, fashion and media operating in more than 25 countries around the world. IMG’s businesses include Events & Media, College, Golf, Tennis, Performance and IMG Academy, Fashion, Models, Clients, Licensing, Joint Ventures, and creative management agency Art + Commerce. In 2014, IMG was acquired by WME, the world’s leading entertainment and media agency. Together, the companies offer an unparalleled client roster; strategic partnerships with sponsors and brands; and marquee assets across sports, entertainment, events, music and fashion.