Canadians Do Everything But Win PC Financial Open

Surrey's Adam Svensson Was Oh, So Close To Recording His Fourth Consecutive Win As A Professional, Losing In A Playoff In The PC Financial At Point Grey In The Season-Opening Mackenzie Tour - PGA TOUR Canada Event - Image Credit Bryan Outram

For all four days of the PC Financial Open at Point Grey Golf & Country Club, Canadian flags were at the top of the leaderboard.

From first round leader Thomas Hay of Langley to second-round leader Bryn Parry of North Vancouver, the weekend action saw the rise of Langley’s Adam Cornelson and Vancouver’s Ryan Williams on Saturday and on Sunday, Surrey’s Adam Svensson, Victoria’s Riley Wheeldon and Richmond Hill, ON’s Taylor Pendrith all moved up the leaderboard and were part of the five-golfer playoff that also featured Americans Drew Weaver and Ross Beal.

While Weaver would take the $31,500 first-place cheque and the PC Financial Open title, it was the young British Columbians and Canadians who made the biggest news.

Svensson, 21, looked like he was on his way to victory, but a disastrous 10th hole on Sunday was his undoing. “The shot on number 10 kind of cost me the tournament,” said Svensson. “I hooked it to the left, made double and it took a lot of momentum out of me.”

Despite the loss, Svensson remained positive about his week. “I had fun, I’m not too disappointed. I thought that putt (on the 3rd playoff hole) was in. I thought I hit a good putt, but it just missed.”

Wheeldon made a clutch birdie on the 18th hole to get into the five-man playoff, but after leaving himself with a 25-foot uphill birdie putt in the playoff, he couldn’t convert when it slipped by the right side of the hole.

“It was a tough putt to leave myself to make birdie,” said Wheeldon. “I’m happy with how I hung in there. It was nice to have a chance to win in front of these local fans.”

Pendrith provided the first big thrills for Canadian golf fans early on Sunday afternoon. Pendrith, who just turned 24 on Saturday, turned in the low round of the week, a (-8) round of 64, which included four birdies and two eagles, at the par-5 12th and 18th holes. 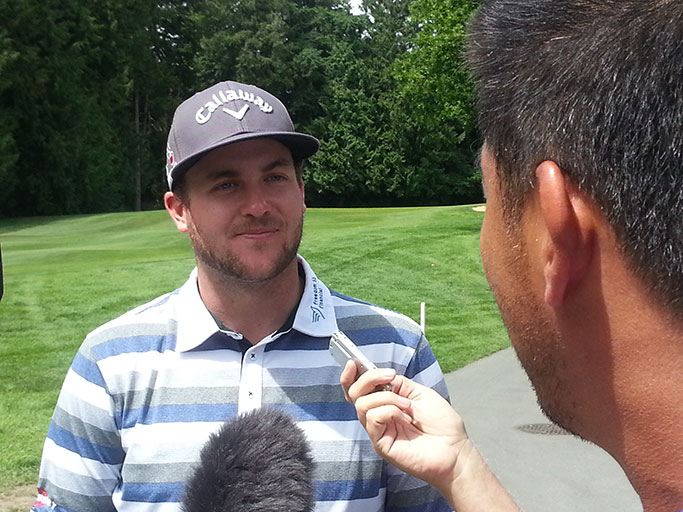 He was happy with his round, his first tournament on PGA TOUR Canada since turning pro eight months ago. “It was solid,” said Pendrith. “I really didn’t make any mistakes. I think I missed four or five greens but I got it up and down each time.”

Parry was the story of the first two days, firing rounds of 67 and 65 which had him at (-12) and a four-stroke lead heading into the weekend. But the Seymour Creek teaching professional who is a local legend on the British Columbia club pro circuit, couldn’t follow that up on the weekend.

“It was way harder. Whatever I tried to do I missed by a little bit,” said Parry after his third round. “It was challenging, it was fun. Everything that seemed to go my way yesterday didn’t today.”

Cornelson couldn’t follow up his third round 66, shooting a 5-over final round of 77 to finish T49. “I didn’t have my best game on Thursday and Friday, but I just wanted to get to the weekend and then focus on trying to go low,” said Cornelson.

Cornelson’s good friend, Vancouver’s Ryan Williams, had the added pressure of representing Point Grey as a sponsored player. Williams made six birdies and only one bogey in a final round 67 (-5) to move up the leaderboard into the top 10. His (-10) total left him in a tie for seventh place.

“It was quite stressful playing at home in front of family and friends. I only get to do it once a year so I guess the pressure is self-inflicted. I played solid all four rounds, but didn’t get much out of the par-5s on the first 3 days, but I’m happy I did today,” said Williams of his three birdies on the four par-5s. 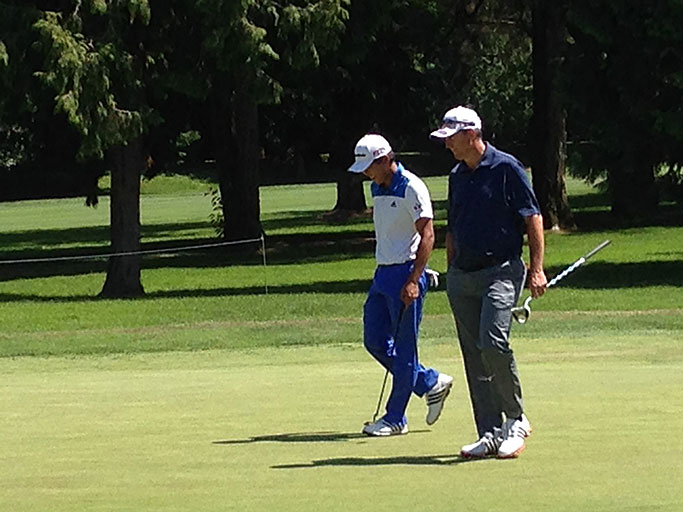 Williams said he hasn’t played a full four-round tournament since Web.com Q-School in December, so he’s happy to get off to a nice start for the 2015 season. “I think this will be a good building block for my season and I’m really encouraged by what I’ll be able to do in Victoria,” Williams said of his next PGA TOUR Canada start.

As for the 25-year-old Hay, it was a good start to his season as well, which saw him earn conditional status at Q-School at Crown Isle. “I had a lot of fun out there with my dad (Alan) on the bag,” said Hay.

Hay, who now plays out of Pagoda Ridge in Langley, played at Northview during his high school days at D.W. Poppy before spending four years at Drury University in Missouri, graduating in 2011.

And if these local players need any inspiration for how close they are to reaching their golf dreams, they need look no further than former PGA TOUR Canada player and current PGA TOUR winner Nick Taylor.

Taylor, who was in Vancouver with wife Andie to help announce Mackenzie Investments as the new umbrella sponsor for PGA TOUR Canada, also took the time to cheer on his friends. “I have a lot of good friends here I haven’t seen for a few months,” Taylor said. “It’s fun to be out here.”

Life has changed for Nick and Andie since he won the PGA TOUR stop in Mississippi last November. They’ve bought a new home in Scottsdale, they attended the Super Bowl in Phoenix and they’re getting used to the first-class hospitality the PGA TOUR offers its stars.

The long exemption also allows Taylor to set his schedule months in advance and he knows that he’ll play at least one Major this year, as he is exempt into the PGA Championship at Whistling Straits in August.

But what hasn’t changed for Taylor is he remembers what it was like to have nothing but his golf dreams. “I remember the feeling. You ware waiting for the season to start all spring. I remember being very excited to go to Victoria, where the Tour used to start, and getting the season going."

As all these talented British Columbian and Canadian golfers head to Victoria for the next stop on the Mackenzie Tour – PGA TOUR Canada, it’s only a matter of time before one of them takes the top prize that eluded them in Vancouver.