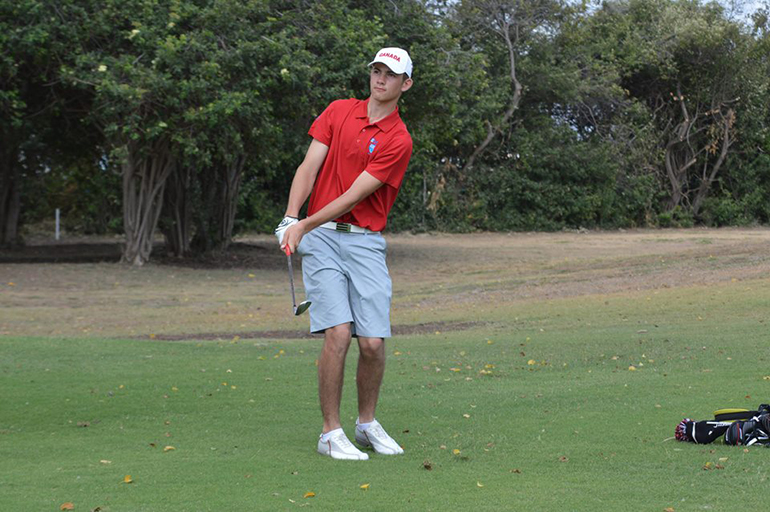 With a final score of 79 (+9) Charles Thompson of Delta, BC finished runner-up in the Top Amateur competition behind Curacao native Said Flores.

“It was my first time playing in this type of wind so it was a great learning experience for me,” said Thompson, who plays out of Beach Grove GC. “I feel like I learned a lot from talking with the pros this week and what’s in the future for me.”

One shot back behind Thompson in 3rd position was fellow Canadian Ty Celone with a final round score of 74 (+4) and tournament total of 237. Like Thompson, Celone enjoyed walking alongside golf’s best.

“I learned lot about the game and how to develop it more,” said Celone. “I feel good about getting back and playing in Canada. It has to be easier than playing in this wind.”

Keaton Gudz, a native of Victoria, BC, finished his Caribbean experience with a final round score of 79 (+9) and a tournament of 252. “Even though I didn’t play well this week it was a lot of fun meeting the pros and hanging out around the resort,“ said Gudz. “Learning how to manage my expectations has been a great lesson and will help me in the future.”

Partnered with Canadian touring professionals, James Love, Scott Stiles and Andrew Jenson during the first round of the competition, the Canadian juniors then partnered with Symetra Tour player, Molly Aronsson for the team competition in rounds two and three.

It was a memorable week for Team CJGA as they enjoyed experiencing Caribbean golf, culture, climate and hospitality. “The team represented Canada and themselves in a first-class manner. Moving forward, the experience gained here in Curacao will be a great benefit to our players,” said CJGA Team Manager, John Lawrence.