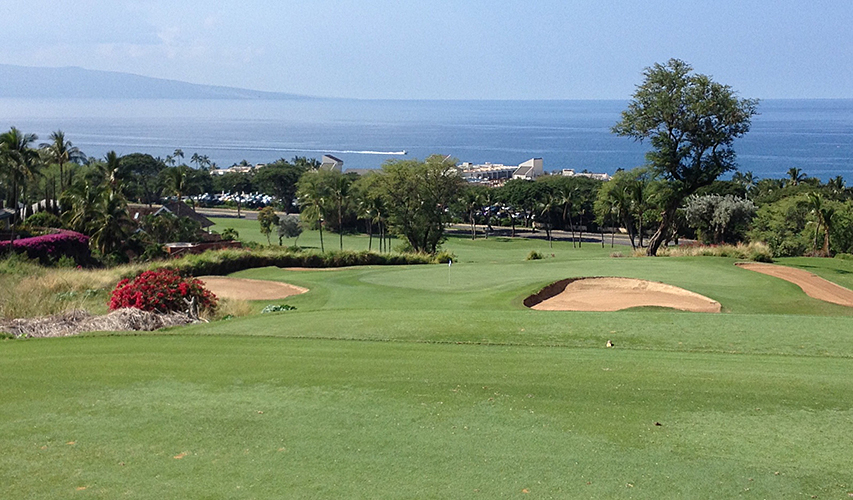 What's old is now new at the Wailea Blue.

The course, formerly known as Old Blue, has seen some modifications to its routing rather than a re-do of its holes and through that, players now find the track still harkens back to the golden past of the game with its manicured fairways and greens now presented in a more enjoyable play.

The thing is, it the changes aren't just about the way the course now flows seamlessly through its nines.

Rather, the owners (Golf BC) decided to go all in on bringing the oldest course in the Wailea area on Maui up to speed.

"This is something we wanted for a long time," began the course's GM, Barry Halle, about the changes that are still afoot.

"We wanted to move the Blue Course golf operations back to where it all started - we were in this location back in the early 1970s, "When we had the Orange Course (that was eventually turned into the stunning combo of the Emerald/Gold tracks) we moved over to where we had been for most of the years of the golf course.

Ever since we built the Gold and Emerald courses the Blue has been stand-alone and so we always wanted to move the Blue back to where it started. It's just taken us 20 years to pull it all together."

There was only one minor modification made to the Blue when things shifted, with a former par 4 hole (the 15th) becoming a par 3 (now the 10th) to accommodate a housing development between the 10th and 18th holes.

That minor change dropped the par to 71 but hasn't affected the fun the course offers as it serves up golf the way it used to be: You know, no long, forced carries off the tee box, strategically placed bunkers rather than sand all over, and greens with subtle slopes and rises that make putting challenging but not frustrating.

One major difference with the layout, which does not affect anything really, is the addition of an executive length nine laid out on the opening stretch of holes.

Helle said this is something that had been talked about by himself, the head pro and the course superintendent and while it had yet to be put into play at the time of this interview, it appeared to be something that has caught the fancy of many.

There is one more little twist to that test though, Helle added. "We're not even giving each of those holes a par (number)," he explained of the short nine. "Par is a state of mind kind of thing," and since golf is supposed to be about fun, and not just numbers, this is a good way to entice new players and keep the older ones involved.

"We want people to play and have fun." "Recognizing that for many people who play golf time is of the essence, and the game for some people takes too long to play a full 18, we have built nine new tee boxes on our front nine that are more like an executive course. So for a person who wants to go and play, but a full golf course might be a little intimidating for them," this is the answer.

The overall reaction to all these changes by regulars and those who may only tee it up once or twice a year at the Blue while on vacation has been overwhelmingly positive, the GM noted. "We have a lot repeat customers...and actually I'm very happy to say the reaction has been nothing but positive. When you play the course, you can tell this is the way it was really supposed to be played. The alignment is correct; it just has a better feel."

Besides the changing of the guard on the course there have been other changes to the Blue Course that are drawing notice of not only golfers but the general public as well, continued Helle.. "This is a much more user friendly location than we had before," he began about all the upgrades.

"The flow of the pedestrian traffic is just so much better within this complex. Everything is just the way it should be."

Besides an upscale clubhouse and pro shop that is "much more modern, very contemporary," there are other amenities on-site, including a great restaurant/bar ("They've latched onto the concept they're going to be the 19th hole, an it's a great 19th hole"), hitting cages and a new putting green, a larger parking lot as well as medical services and a hair dresser.

The thing to remember though is despite all the changes, the Blue Course is still, at heart, its old self.