The Playin' O' The Green - Part One 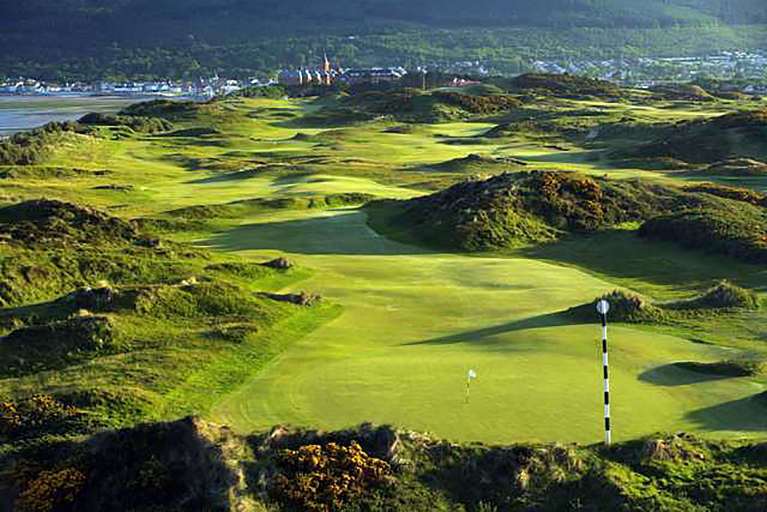 I wanted to plan an epic golf trip. A trip of a lifetime…bucket list courses. I had been to the Home of Golf, The Old Course in St. Andrews, Scotland. Could anything really compare to that? To my surprise and my delight, I found that trip….Ireland.

It was such an extensive trip and so many wonderful adventures to share that I am breaking my tale into two parts. I hope to whet your appetite in Part 1 with my golf travels to Belfast and Northern Ireland and back down to Dublin.

Part 2 will cover courses and sites travelling from Dublin to the West Coast of Ireland in Ballybunion and back to Kildare.

As I researched the trip I must admit it was a little daunting. There were over 345 golf courses, hundreds of accommodations and an abundance of tourist sites to see. How do you cram it all into a 9 day trip and hit all the must-see, must-play and must-stays?

The answer is enlisting a travel company that specializes in golf travel in Ireland. I worked with a delightful Irishman, Eamonn Kennelly, with Golf Vacations Ireland (www.golfvacationsireland.com ).

When I told him some of the courses I wanted to play that spanned the tip of Northern Ireland, the East Coast and the West Coast he chuckled and said you don’t have to do it all in one trip.

But I felt I did. What if I couldn’t make it back? So he made it happen.

We departed for Ireland (traveling companion and husband/golf partner Anton is the other half of 'we' in Lisa's entourage - ed.) in the afternoon from Calgary and after changing planes in Toronto it was off to Dublin. We arrived at 7:00 am in Dublin.

Eamonn met us at the airport. Thinking it too early for a pint we opted for coffee, especially seeing that we had already been up 18 hours - save a short nap on the plane - and had a full day ahead.

Eamonn gave us the most invaluable treasure on a golf road trip, a GPS with destinations preloaded and extra information on sites and dining and a cell phone in case of emergency or for convenience as ours did not work there. He bid us farewell and we were off on our adventure.

We stopped briefly in Belfast, a fabulous buzzing metropolitan city that has seen tremendous advances thanks to the Celtic Tiger economic boom from 1995-2007, and checked into our room at the Europa Hotel. 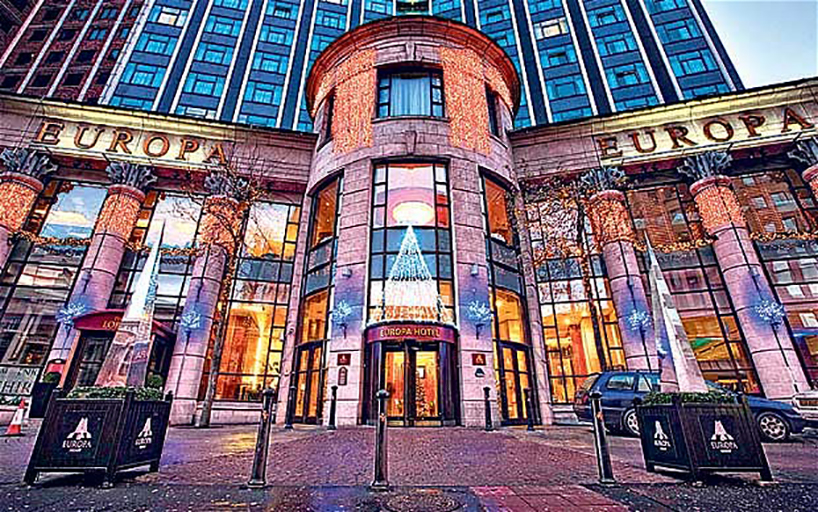 It was a magnificent hotel located in the heart of Belfast with contemporary dining, lavish rooms, grand entrance and positioned well with shopping, tourist attractions and famous pubs within walking distance.

We changed into golf attire and then were on the road to The Northern Coast. It took us 2 hours to get to our first course, Portstewart.

It was everything we expected. Beautiful views of the Atlantic Ocean and River Bann. It was a phenomenal introduction to true links golf, as Ireland is home to over 40% of the world’s links courses.

There are 54 holes on site and we played the championship course The Strand. The opening hole is an elevated tee with stunning views and is thought by many to have the best opening hole in Irish golf.

It was very hilly but had relatively generous landing areas. The greens were in fabulous shape and lightning fast. Not wanting to waste a spare moment of our trip, we stopped at as many tourist sites as possible.

Thus, after our round and on our way back to Belfast, we hit World Heritage site 'Giant’s Causeway'. An array of over 40,000 basalt columns beautifully arranged created by a volcanic eruption.

The tops of the columns form stepping stones and many are in a hexagonal shape some reaching 12 meters high. It was an amazing site and worth the stop. We stopped at a roadside pub on the way home and devoured a delectable Irish meat and potatoes dish.

After being up for almost 33 hours with only a short nap on the plane, 13 hours in the air, a road trip with 6 hours of driving, championship golf and sightseeing, we were done our first day. We woke up the next day and embarked on the Black Taxi Tour of Belfast.

A wonderful 90-minute journey and story of Belfast’s past, told through the Political Murals around the city with commentary from our guide. After the tour it was back up to the tip of Northern Ireland. A 2-hour drive to the Old Bushmills distillery did not disappoint.

It is Ireland’s oldest licensed whiskey distillery and started producing “uisce beatha” (Gaelic for 'water of life') back in 1490. It is an informative tour and ends with a glass of whiskey. I think I put hair on my chest with that swig.

With a skip in our step it was now off to Royal Portrush, one of the most challenging tracks in the world. It is the only club in Ireland to have hosted the British Open. Famous members include Darren Clarke and Padraig Harrington and the course record is owned by young Irish PGA Tour Star Rory McIlroy with a blistering 61.

It is home to two 18-hole courses, the Dunluce Links and the Valley Links. It has the strictest handicap restriction I have come across with a max factor on Dunluce Links of 18 for men and 24 for women. To put it into perspective the Old Course at St. Andrews is 24 for men and 36 for women. 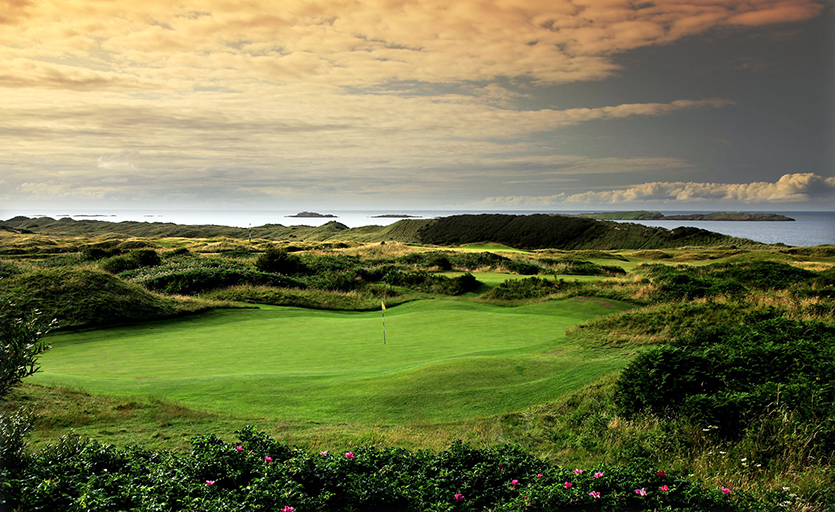 The course was nothing short of spectacular. Ocean views, narrow fairways and the rough was unbelievable. It was made up of natural grasses, fescue, bushes and gorse and was thick and long in many areas.

Many bunkers were lined with the long grasses. The sprinkler heads aren’t marked and I recommend a range finder for players who need to know their distance. There are tight lies which render a 60-degree wedge useless and putting from off the green is commonplace. Truly a spectacular venue. After dinner we went to the quaint seaside town of Portrush and had a fabulous dinner on the water.

The next day it was off to Royal County Down, our most anticipated course. Constantly ranking in the Top 5 golf courses in the world, it’s known for its stunning beauty and its true test of golf ability.

Designed by Old Tom Morris in 1889 for the sum of 4 pounds, it is a naturally beautiful course. It sprawls out beneath the impressive Mountains of Mourne and runs along the shores of Dundrum Bay.

The views as you embark on the first 4 holes are breathtaking. Bright yellow gorse punctuate the shape of the fairways in the spring and early summer and the fall brings the picturesque purple heather. The sand dunes help shape the course and the fairways are naturally undulating. The small greens require accurate approach shots and there are several blind tee shots that make a caddy a good investment.

The signature hole is well accepted as the 9th hole, a par 4 which may be one of the most photographed holes in golf. The stunning panoramic view from the edge of the fairway is a golf picture like no other.

After the round it was off to Dublin. We tried to find Bru Na Boinne, Neolithic passage tombs that are older than the pyramids, but after some wrong turns, some spousal disagreements on direction, we missed it.

We did however make it to the Hill of Tara, Seat of the High Kings of Ireland dating back to the 7th Century which was interesting but we missed the Tour which would have added meaning. We also managed to locate Trim Castle, one of Ireland’s finest Norman castles and was the site of the movie Braveheart.

Finally we arrived in Dublin and it was a bustling downtown core. Attractive waterways run through the city and there is a beautiful compliment of old and new. We stayed at the premier boutique hotel, The Clarence, owned by the rock band U2.

It had simple elegance and warm hospitality located within walking distance to many top attractions and directly on Temple Bar, a hip and active restaurant and cultural area.

The next morning it was off to Portmarnock a 27-hole facility. Only 12 miles from city center this truly great links course has been host to many prestigious events including the Canada Cup in 1960 where Arnold Palmer played his first links style course and won the event with partner Sam Snead for the USA. 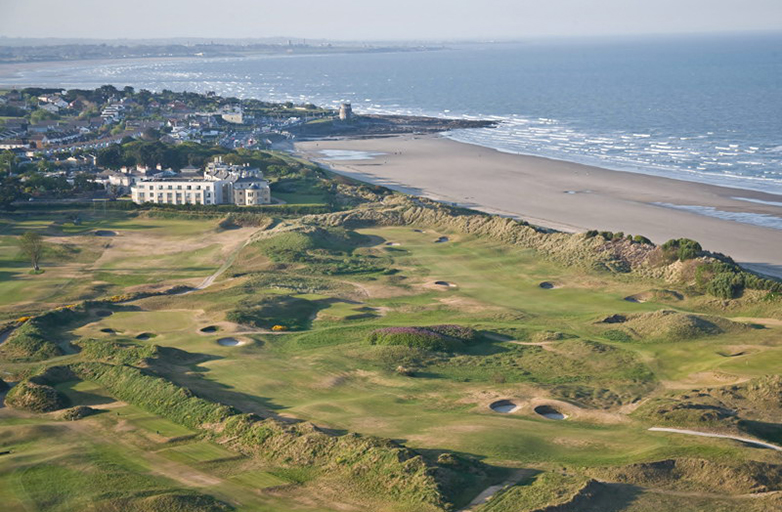 It is a true and fair test of golf. Located on a sandy peninsula originally owned by the Jameson Family (of Whiskey fame) the fairways are quite flat and wind is almost always a factor. The natural terrain, sand dunes, elevated tees, elevated greens that are often large in size are fast and putt true and the unique bunkers (98 in total), make for a challenging and enjoyable day of golf.

The final 5 holes will require precision shot making to avoid bunkers and rough that take you from “going for it” to merely advancing the ball if it gets snared. The only downfall was that there was a great deal of airplane traffic which at times took away from the tranquility.

After the round it was back to Dublin to hit the tourist hot spots. We visited the Old Jameson distillery and I was one of the blind taste testers of an array of Whiskey, Scotch and Bourbon. I choked each back and found I preferred my whiskey with cranberry juice. It was out to a pub afterwards for dinner and another 3,000 calorie meal worth every bite.

The next morning it was off to play the Island. It was a wonderful course and the first one we encountered that was measured in meters. You add about 10% to your distance on each 'yardage.' There was a lot of calculating and club selection going on. We were a twosome and we had 4 senior men on our tails all day long. The Irish play fast.

The Island has some of the tallest sand dunes in golf and is surrounded by water on 3 sides providing fabulous harbour views. Until 1973 the club was accessed by boat. Wind is often a factor and the rugged terrain will be a test to your shotmaking ability. The grasses in the rough were long and stole balls.

Members said to sacrifice distance for accuracy at this course and though close in proximity to Dublin you felt as if you were in a peaceful remote setting. After the round it was back to Dublin to encounter the highlights we had missed, via the Double Decker bus tour. Our favourite stop was the Guinness Storehouse.

Built in 1904, they offer a fabulous tour including the fermenting process and creative advertising campaign over the decades. The tour culminated with a pint on the top floor Gravity Bar with 360 degrees of windows with panoramic views of the city of Dublin. A must see.

We are 5 days in and only halfway done.

Part 2 of the article will continue with our fabulous travels and adventures to Ballybunion, Lahinch and the K Club. To be continued…..

About The Writer:
Lisa is the reigning 6-Time Canadian Long Drive Champion for women and can be reached through her website at www.lisalongball.com