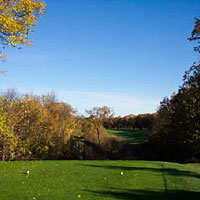 They say you can never go back. Well I'm not sure who "they" are but they are wrong. You can go back and it's a lot of fun as well.

This summer I had the chance to play the course I grew up playing in the south part of Winnipeg.

St. Boniface Golf Course holds a shag bag full of memories for me and most are very good.
The exceptions only have to do with some shots that are best left submerged under the waters of the Seine River which runs through the course.
As I noticed from the outset there are lots of changes at the old course but it's still a very familiar track which is part of the ambience of St. Boniface. Director of Operations, Geoff Kehler says they have lost a lot of trees on the back nine to an insect issue.
"A lot of the spots that used to be denser are a bit thinner now but we have been planting trees trying to replenish and make it what it was." Gone is one of the iconic trees which was the model for the club's logo, a large oak which steadfastly guarded the right side of the 9th green.
The club replanted another one further back from the green as the roots from the original sentinel were growing under the green, weakening the grass.
"It's not near as menancing....yet," he chuckled. "It's going to grow wide, not as tall and will be somewhat similar to the old tree." Some of the holes have been tweaked but not transformed into something which a former member from years ago wouldn't recognize.
Number two for example has a tee box further back and the green was expanded by quite a bit but it's still basically the same test as decades ago. Some of the bunkers have been redesigned in order to make them a bit tougher to get out of. I found they were still quite easy to get into, sadly.
Even though it's not a long track, ranging from 5700 to 6400 yards, St. Boniface relies on cleverly sloped greens to protect against the advancements in technology.
There certainly is a premium placed on accuracy and Geoff agrees, especially on the much tougher back nine. "That's where you need to be straight," he points out. "It doesn't matter how far you hit it, if you're not straight you're shooting a million."
If you do stray off the fairway, chances are you'll always have a chip out, with a couple of exceptions, most notably to the left of #13 and #15. Both places I am very familiar with as a left hander with a slight slice problem. Or as I like to refer to it, a fade that is 'very exuberant.'
This allows the pace of play at St. Boniface to remain around the four-hour mark because you stand a good chance at finding your ball on most holes.
The future, as with most courses, lies in growing the younger membership to walk in the footsteps of the seniors and Kehler says in Manitoba it seems the average age of golfers is increasing. "That's the goal," he said, "continuing to  grow our membership and keeping it full and active."
And of course, it will continue to provide many memories that you can either recall in your mind or make the trip back and walk the course again.