Fox Harb'r: A Joy to Play and Stay 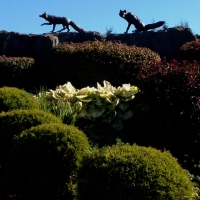 This isn't to insult Ron Joyce but it appeared his desire to build a golf course for family and friends over a decade ago was a somewhat crazy ambition. Yeah, crazy like a fox.

Joyce, the former head of the iconic Canadian institution Tim Hortons, turned that dream of an idyllic getaway spot for a select few into a comfy resort area for many.

Known as Fox Harb'r Golf Resort & Spa, the area he envisioned those many years ago now encompasses a wide spectrum of recreational amenities, not the least of which is an outstanding 18 hole golf course with a number of spectacular ocean view holes.

The thing is, this area in Nova Scotia is also home to a par 3 executive golf course; tennis courts; mountain biking areas; a private beach; sport shooting including clays and skeet; fly fishing; kayaking; a spa; and an airport with a 4,000 foot landing strip for charter aircraft.

You see, that idea of a place for family and friends has turned into a major vacation spot for all. Either that or Mr. Joyce now has more friends than he could possibly hope to count.

"We opened in (July) 2000," explained Elliot Isenor, the director of golf operations and recreation at Fox Harb'r, located in Wallace, NS, noting the area has done nothing but gain positive feedbak.

While many may look at an area like this as a private retreat for a privileged few, Isenor pointed out it is in fact a semi-private resort facility open to all, in a manner of speaking.

"That's part of what we've played with,” he began about their public personna, “our identity of what we wanted to be, how this is all going to work. Mr. Joyce started this place with the idea it was going to be a golf course for himself, some friends, family, for everybody to just come, relax and enjoy. And then it's just expanded over the last 13 years."

What For Harb’r has become is a spot on the Atlantic Ocean that is jaw-dropping in its beauty and flawless in its charm and peacefulness, set as it is far away from major centres surrounded by water and parkland.

As part of growing this recreational Mecca, there are now rental suites as well as townhouses and homes for sale. Those in turn lead to various types of memberships that are available at Fox Harb'r including full, social, and those for resort guests.

The one thing they don't have here though, Isenor pointed out, is "day golf."

"We do a little bit of it but it's more a piece-by-piece business sort of thing. Most of our play is resort members and the different class of resort members."

In other words, Joe and Jane Public can golf here - they just can't pick up the phone some morning and request, and get, a tee time for that afternoon. Rather, they must be guests at Fox Harb'r to make use of its amenities. The good news is that becoming a guest here isn't all that hard.

"I think what it was, he (Joyce) built the idea of the golf course and it just expanded," Isenor continued about the growth of the area. "The people around him just imagined different things and we were trying to expand our business to see what it could be."

What that spawned was the corporate business the area gets, which is helped immensely by the airport. Isenor noted there is a Montreal-based company who use the facility often as their people "can land here and be on the first tee within 15 minutes."

"It's perfect for the corporate side because when you leave the gates there's nothing else for them," Isenor continued about the ideal locale. "If you're a business and you're bringing in clients you know you're going to have them for however long you decide because they aren't going to leave the gates, skip out on dinners, skip out on sessions. If you go to Toronto, you're going to lose half your guys at the end of the day. Here you're not going to lose them; they want to be fed, play golf."

And speaking of golf, Fox Harb’r is actually two different courses. The first nine holes are a parkland style with wide fairways and rolling terrain and it’s well treed (although the trees are pruned well up the trunks so as to make finding wayward shots a bit easier).

Once you turn though, you find the ocean front and centre on every hole including the drama of the last four holes with the ocean almost right alongside you as you make your way in.

"The front is a good test of golf,” said the pro. “The par 4s are quite long so you really need to play well on the front nine but the back really gives you the chance to score. I always say to people, 'Survive the front' and on the back you can actually really start to make some birdies.”

The difference in scoring numbers is a result of the difference in shot yardages on the two nines and in particular on the par 4 holes, said Isenor. He noted the average length of those on the front is 390 to 400 yards while on the back they drop to around 350 or slightly more.

The wind also plays a key role here with the final four holes on the back nine "usually straight down wind," helping shots travel a bit farther.

While the corporate end of the game is a big boon for Fox Harb'r they've recently expanded their tee time offerings to the public through stay-and-play packages. For two people to drive through the impressive front entryway, stay overnight, have breakfast the next morning and then tee it up on an outstanding course - for all the golf you can play – the cost [s only $799 in the high season.

"We have 15 minute tee times so playing 27 holes in a day is no problem. You wouldn't even work at it," Isenor noted, adding that more and more they are seeing buddy groups or couples showing up to take advantage of such great pricing for a great recreational facility.

And think about this: The ability to play that many holes in a day could set you up for taking a run at the course record - 63 - held by some dude named Tiger Woods who carded that number in an exhibition with Charles Barkley and Hank Haney in 2009.

So consider yourself a friend and make plans to head to this wonderful Atlantic coast getaway because nothing here is going to disappoint you from the scenery or that '8' on your scorecard because you know there is always another picture-perfect hole awaiting and another 18 holes to once again go after that course record.

For more information on the course and all its other amenities along with rental availability at Fox Harb'r Golf Resort & Spa, head to their website at foxharbr.com and who knows, a single by the name of Ron Joyce may even show up and join you, looking to make some new friends who can enjoy his golf dream.

About the Writer
Gord Montgomery is the sports editor of two weekly newspapers in the Edmonton area and is a member of the Golf Journalists Association of Canada. He has written for Inside Golf for the past five years with the majority of his coverage in north and central Alberta. He can be reached at noraltagolf@gmail.com. He’s also on Twitter at @iGgolfwriter.