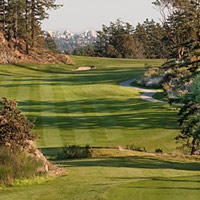 Over the past decade, Highland Pacific has been an almost silent blip flashing on the edge of Vancouver Island golf radar screen.

But little did almost anyone know that it would turn out to be a supersonic Stealth fighter.

The Plasterer family had owned a piece of property only minutes from downtown Victoria since the early 1960s that patriarch, Herb Plasterer had long envisaged as a golf facility.

Starting 13 years ago, they began planning and working on developing the 190 acre property that lies in both Saanich and View Royal.

The first blip on the radar was a practice facility that after opening in 2007 immediately set the standard for the Victoria region.

300 yards deep, this is a place where you can definitely let the big dog eat.

What really sets it apart however, are a couple of water hazards, one short, one long that more than come into play. It is hard to imagine a better place for a golfer to get over a fear of hitting over water.

For those who are more comfortable about clearing the H2O, the range lays out almost like a series of holes that allows players to emulate on-course situations.

Testament to its quality, the combination aquatic range, practice facility and clubhouse at Highland Pacific Golf quickly earned a 2008 ranking among the Top 100 Ranges in North America as selected by Golf Range Magazine, an honour it has repeated in both 2009 and 2010.

Planning for the golf course component of the development had been ongoing through this process.

With a piece of land that rises almost 300 feet, finding a routing that would take full advantage of the superb sight lines was key.

They began by building a 3-hole loop near the range clubhouse in 2007 and had a completed nine open by October of 2008.

Golfers who checked out the routing that played along the lower half of the property that borders both Thetis Lake Park and Francis/King Park were more than pleasantly surprised.

There was a good mix of interesting holes where wide, sweeping, bent grass fairways were defined by tree lines and rock faces; players were faced with demanding elevation changes and fast but fair greens.