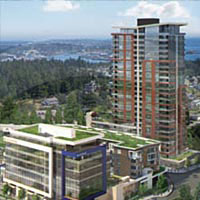 The idea of gracious living on the Westshore is nothing new. As far back as the opening of Royal Colwood Golf Club in 1913, there has been an attraction for residing near golf courses west of downtown.

More recently, there have been a number of large developments located within easy “driving” distance of Royal Colwood and other area golf courses.

This comes as no shock to area realtor Jason Leslie, "Moving my office to the Westshore over a decade ago was viewed with surprise from both colleagues and friends but I strongly believed in Langford's Mayor, Stewart Young, and his vision for a new suburban city that would offer a higher quality of life at a more affordable price than the core municipalities."

The business/development oriented Young has spearheaded a forward thinking approach that saw Langford boasting a stunning 30% population growth rate over the three year period from 2009 to 2011.

Continues Leslie, "The exponential growth we had has been truly phenomenal... the big box stores, Bear Mountain, new schools, the re-development of downtown Langford, Royal Bay and Latoria Creek Park in Colwood to name just a few."

With any growth of that size, there are likely to be a few bumps along the way. In this case, the bumps were mainly as a result of the economic slowdown that occurred a few years ago.

Bear Mountain, a major development with 36-holes of Nicklaus designed golf and a Westin hotel, went through a major restructuring as did a smaller development located on Esquimalt lagoon named Aquattro.

While the banks involved in running Bear Mountain are still actively seeking a buyer, Aqattro, which sits on a 15-hectare site in Colwood, now has new ownership.

Vancouver-based Seacliff Properties Ltd. has bought the development for approximately 17 million dollars and changed the name to Ocean Grove. The location fronts a federal bird sanctuary with views toward downtown Victoria and across the Strait of Juan de Fuca to the Olympic Peninsula mountains.

Seacliff plans to sell the remaining 19 near oceanside condos in the existing building later this year and break ground on the development’s other low-rise towers and townhomes in the spring after getting some minor re-zoning through Colwood's council. Plans also include opening a bistro- neighbourhood store in the near future.

Closer to Royal Colwood (actually, just a wedge from the 15th green) is Colwood's biggest current development, the Capital City Centre on the Old Island Highway.

This ambitious project encompasses nearly 14 acres and has zoning approval for up to 3.8 million square feet of mixed-use space upon complete build-out. The first phase, (which is currently under construction) is the impressive Skye hi-rise tower.

The 27-storey condo building will be the tallest on Vancouver Island with breathtaking 360° views. With prices starting from the mid 200's, there are floor plans and prices to meet all needs.

The company behind the development, League Financial Partners, also has an innovative approach to mortgages that makes ownership even more attractive.

Although on a smaller scale, another hub neighbourhood is the area along Latoria Road. The well regarded Olympic View golf course has provided an anchor around which area development has blossomed.

Just across the street is a low-rise condo village complete with a Red Barn grocery store and down the street is the Latoria Creek park. Between the two are a series of subdivisions offering home options from condo to patio to fully detached. The golf course is owned by GolfBC and there are rumours that they will open up a substantial real estate component in the foreseeable future.

Closer to the ocean on Latoria Road is the really big scale development that will be largely responsible for an expected near doubling of Colwood's population in the next 15 years.

Located on a 419-acre waterfront tract that had been a quarry, Royal Bay is the largest development site still available in the entire Capital region. Now owned by B.C. Investment Management Corp. (a major pension fund), existing zoning from 1998 allows for up to 2,800 homes, schools, commercial use, parks, a village centre and community facilities all to be rolled out in phases.

There is a new plan currently being put in front of Colwood council and in an interview with the Times-Colonist newspaper, B.C. Investment Management Corp.’s Gwen-Ann Chittenden said they are, "…Considering (adding) other opportunities, such as the marina, (and that) will form part of the (rezoning application) process." Right now, they are conducting work to prevent soil erosion near the foreshore and a high school on the site is slated to be completed by 2015.

There has also been news at Bear Mountain. The banks submitted a rezoning application to the City of Langford last November where, in a nutshell, they want to turn nine holes into homesites and park.

While there has been mixed reaction to the proposed change, there is no difference of opinion about the Whistler-like village here. The 5-star Westin Hotel is a great place to stay and offers a full range of cuisine options while the adjacent spa has garnered rave reviews.

With all this development, you’d like to have the amenities and services to go along with it and the Westshore has always had a few stand-out community icons. One would be Royal Roads University which offers first class education in a very intimate setting; another would be the beach on the Coberg Peninsula which offers the longest walkable sand beach on southern Vancouver Island.

There are also first rate weekly markets in both Langford and Metchosin and a vibrant art scene located at the Coast Collective at Esquimalt Lagoon. All of this is in addition to literally hundreds of kilometres of walking trails and the famed Galloping Goose Trail.

With this amount of growth, there is no question a tremendous amount of infrastructure and services needed to be built and thanks to good planning and execution, that has occurred.

Just down the street from the Capital City Centre is the Juan de Fuca Recreational Centre that may be the biggest single site rec centre in the province.

In Langford, The City Centre Parks has many of the same amenities plus it is home to Rubgy Canada who has their headquarters at the Bear Mountain Stadium. This intimate stadium seats 1200+ under cover and also offers 10 corporate suites.

There are a number of other projects underway across the Westshore both commercial and civic. There are plans for a new 50 acre Business Technology Park beside the Spencer Road Interchange, and as part of the Royal Bay project, a potential Arts Centre as well as a 1.8 km long foreshore park.

Jason Leslie is very excited about where this is all headed, "We are at another big starting point with many exciting new projects on the go - the new $25+ Million Dollar Aquatic Centre, the upcoming 50 acre Technology Park in Langford. We are all so lucky to be residents of this dynamic community that offers so much."