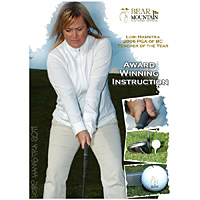 At this time of the year in the golfing world a virulent strain of ‘disease’ shows up, simply known as the Golf Bug.

When this ‘sickness’ strikes, especially on the prairies in the early months of spring, sufferers have a tough time dealing with its side effects.

In fact, some patients showing the symptoms of this malady have been known to actually go so far as to wander outdoors in the still cool/cold temperatures to tee it up in an attempt to shuttle a little white ball around in the muck and yes, even snow.

This, though, is where a remedy for the prairie’s springtime affliction comes into play – a trip to the West Coast and Victoria in particular – and a few days of healing at a golf academy at the Bear Mountain Golf Resort and Spa.

“In Victoria, we don’t get a lot of snow so our golf courses stay open all year,” Lori Hamstra, one of the lead instructors at the academy said, rubbing in the fact that the Edmonton area, where she was attending the 2012 Alberta PGA Golf Show, still had a fair amount of white stuff covering the ground.

Because of that, she continued, visitors to the island and especially those suffering from the ravages of golf withdrawal find the climate to their liking in the early part of a new season.

“They can get a head start on their golf season,” she said of the flatlanders making, uh, birdies rather than hay while the sun shines.

“They can go to the golf school in the morning, go for lunch, then go out and play 18 holes. This is at the Westin Resort (at Bear Mountain), so they can also spend the night (on-site),” to get an early jump on the next day’s play.

A day at the academy is busy, but rewarding in the end, Hamstra continued.

“Most of the time we (including John Randle) try to break this down to each golfer’s ability so we don’t overload them with information.

It will definitely cover your chipping, your putting, sand play and we do make sure we get out onto the golf course to do course management as well, where we’re out on the course about two, two-and-a-half hours with you.”

With their busy time fast approaching – Hamstra says April is when those weary of winter and starved for golf come rolling in - now is the time to prepare yourself for what could possibly be your best season on record.

“People are trying to break the (bad) habits they’ve created over the winter because of being bundled up in all their layers of clothes,” she noted, speaking as one who’s been there since she grew up in Sherwood Park, just outside Edmonton.

“Also, people don’t do anything in the winter golf-related and you get stiff, sore and create some bad (swing) habits.

April is the best time to come out, do a quick tune-up even if it’s only one or two lessons, just to make sure you don’t start the season with bad habits.”

At the Bear Mountain Academy the maximum student to instructor ratio is 1-to-6 but the two and three-day golf schools offered, have teacher/student ratios of 1-to-4. “We won’t do more than four per instructor,” Hamstra stated.

To find out more about the golf school and academy at Bear Mountain in Victoria, where no one appears to ever suffer the ravages of being bitten by the winter golf bug, go to Hamstra’s website at ljhgolfacademy.com or e-mail her at lori@ljhgolfacademy.com.

By doing that, you’re sure to shake off the nasty ailment you may be suffering from thus setting you up to head back to the prairies in fine form for the upcoming golf season.