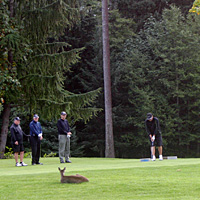 Everyone needs a little “island time” now and again but one doesn’t have to wing over to Hawaii or Mexico to get it.

Rather, all you have to do is make your way to Vancouver Island and its great array of golf courses to have an ideal “I got away” weekend be it in the spring before the prairie’s golf courses find their way out from under the snow or in the fall, as the cold winter winds begin to blow in.

During a recent trip to the island, and in particular the mid-region, I had the chance to tee it up at a pair of great layouts - Storey Creek in Campbell River and Morningstar in Parksville to wrap things up.

There are all types of adverbs to describe a round of golf at Storey Creek GC in Campbell River, B.C., but perhaps this is the best way to sum things up – I’d go back tomorrow if I could.

No, let me rephrase that – I’d go back this afternoon if I could.

Storey Creek is like a golf course from a story book – scenery right out of some writer’s imagination; wildlife visible at almost every turn; holes that are separated from each other making you feel like your on your own private track and a variety of holes to test every club in your bag.

“It was carved out of the bush back in 1989,” head pro Kyle Stoudt noted, “and when you’re out there you typically don’t see too many other players. Every hole you’re on is your own hole out there. You’ll see more deer than you do golfers.”

Stoudt says the main characteristic of Storey Creek is that it’s a walkable, unique track that calls on players to use every
club in their bag.

Storey Creek is the most northern course on the Vancouver Island Golf Trail and is generally open pretty well year round, only closing when it snows too much for players to make their appointed rounds.

Despite looking like you’re going to be firing rockets among houses on this track located in Parksville, first impressions are misleading.

Steve Phillips noted the course, which has been host to a number of major events, came prior to the houses that are built around it. The fact of the matter is you soon leave the neighbourhoods behind and head into the forested areas of this pretty course.

“There are only four holes where you see houses,” the head pro/general manager noted. “After that, you’re in the forest.”

Morningstar is a “good walking course,” Phillips said about it’s lack of elevation changes which don’t hurt the layout at all.

The Par 3 Holes At Morningstar GC Can Be Challenging, In Fact So Challenging That The Canadian Tour's Q-School Won't Use The Back Tees During Their Events

“It can be a very challenging golf course if you don’t play from the right tees,” the head pro warned. “The greens aren’t too difficult, but you have to hit it in the right spot.”

As a testament to how difficult this course can play, it has been home to the 2010 Royal Cup senior women’s national championship and since 2008 they’ve been home to the Canadian Tour’s Q-School western event.

Phillips said Morningstar stands up well to what those that feel they’re good enough to be called pros throw at it.

“There are a few holes out there where you actually see Tour dreams end,” Phillips said, nominating No. 12, a 404-yarder that can eat anyone for lunch as one such stumbling block.

The course plays to 7,200 yards that by today’s standards may not be overly long, but then again, that’s at sea level. To make up for that, the par 3 holes, at the Q-School event, aren’t played from the tips.

“That gives you an idea how long this course is,” said Phillips.

While The Fairways Are Wide For The Most Part At The Morningstar GC, The Hazards Are Lurking Not Far Away And Can Put A Halt To A Good Round In Very Short Order

That being said, this is a great course for scenery and challenge as long as you begin each hole in the correct spot.

“The key here is getting on the right tee box. If you play the wrong tees – I rarely play the gold tees unless it’s hot and dry – you’ll have trouble.

“The thing is, each hole is so unique out here. There’s not a whole bunch of oceans and mountains but just a bunch of great golf holes,” Phillips ended.

So, if as a prairie person who can’t wait for a new season to tee off and yet you know it’s going to be a few more weeks before all the snow and ground moisture are gone, why not head out for some island time to a place that’s not all that hard to get to?