Michell Liu (Centre) Was The BC Women's Amateur Champion In 2020 While Lauren Kim (Left) Was Runner - Up. Also Pictured At Right Is 3rd Place Finisher Luna Lu - Image Courtesy BC Golf

Lauren Kim and Michelle Liu are back at their respective high schools and if their teachers happen to ask them to write one of those ‘What I did on my summer vacation’ essays, both will have quite the story to tell.

The two talented teen golfers spent their summers south of the border where they made quite the impression.

Kim, a 16-year-old Surrey resident, and Liu, a 14-year-old from Vancouver, are both members of Golf Canada’s national junior team. They headed south early this summer when it looked like many Canadian events might not get played.

“They took advantage of a not ideal situation with COVID from a competitive standpoint,” said Jennifer Greggain, coach of Golf Canada’s national junior teams. “They made a decision to spend the summer playing in the U.S. and they embraced it. Obviously, the plan worked well for them because they both had amazingly productive summers.”

Kim started her summer with a bang way back in June when she won the AJGA’s Hale Irwin Colorado Junior Girls title by 12 shots. A few days later, Kim topped the field at a U.S. Junior Girls Championship qualifier in Colorado. Kim played in five AJGA events this summer. She won three of them and finished no worse than tied for fourth.

She was homesick at times, but Kim feels like her game benefitted from the time away from home. “I was pretty consistent,” she said. “I didn’t have too many ups and downs during the tournaments that I won. If I did have a bad hole I always knew how to bounce back. That was something I was pretty proud of.

“My time down there kind of showed me where I was standing in terms of how good I was, I guess. There are obviously good players here (in Canada), but the competition is tougher in the U.S., so it really helped to be able to compare myself to the girls down there. Now I know where I stand and now I know what I have to work on to get even better.”

And now the U.S. college coaches know all about Lauren Kim. She was already on their radar, but her performance this summer has made her a hot commodity. Kim is just starting Grade 11 at Earl Marriott Secondary and college coaches were allowed to contact her early this summer. She has been swamped with expressions of interest from U.S. schools.

Kim has narrowed her choices down to two or three schools and will do campus visits this fall. “It’s kind of exciting,” she says. “It’s something new and when you first get all the emails, you are quite shocked. They are selling themselves to you, so it’s interesting.

"Now that it’s been a couple of months since they were able to contact me and I have narrowed it down to a couple of schools, it is not as nerve-wracking. I just have to make my official visits. It’s been a fun process, talking to coaches and getting to know them.”

That process won’t start until next summer for Liu, who has just entered Grade 10 at Crofton House School in Vancouver. Liu made headlines two years ago when she qualified to play in the LPGA Tour’s Canadian Women’s Open as a 12-year-old.

Last summer, she became the youngest winner in the history of the B.C. Women’s Amateur Championship. Her AJGA wins this summer have only added to an already impressive resumé and she is sure to receive numerous offers from top U.S. schools. 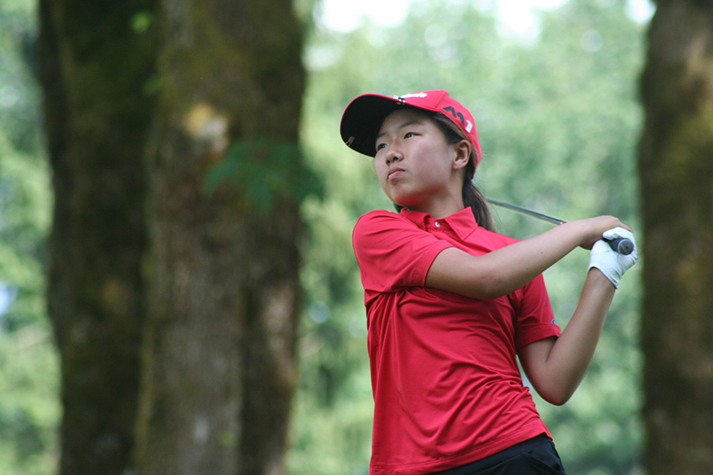 One of those two AJGA wins this summer came at the Mariah Stackhouse Girls Invitational played in early September at the Stanford University Course in California. Liu shot rounds of 66, 67 and 69 to finish at 11-under par and win by two shots.

That win came after a spell where Liu said she had been struggling with her swing. “Going into that event my swing wasn’t feeling that good,” she said. “In my practice round I was hooking everything and I thought, this is going to be an adventure.”

Her final round turned into something of an adventure after she lost a ball on the 15th hole. “On the 15th hole I had, like ,a two-shot lead and my ball mysteriously went missing.“ she said. “I mean I hit it left but not very much left so I guess I lost it.

"I doubled that hole but then on 16 I made like a 50- or 60-foot putt to make a birdie so that was really a turning point. And then on 18 after blasting it 20 yards past the hole I was able to save a par. So I think considering how I had struggled in the events before that, it makes it pretty cool for me.”

It was also cool that the win came at Stanford, a school that intrigues Liu, who is a straight-A student. “Stanford would definitely be pretty cool to play at,” she said. “Academically, it wouldn’t be a problem.”

Kim and Liu both have aspirations to one day play on the LPGA Tour. Another highlight of Kim’s summer came last week when she got to play nine holes with Canadian LPGA Tour regular Alena Sharp at Morgan Creek Golf Course in Surrey. Sharp’s swing coach is Brett Saunders, whose golf academy is based at Morgan Creek and she was in town for a tune-up before heading back on tour.

“That was definitely an awesome experience, just watching her play and practice and seeing what a tour pro does,” Kim said. “They don’t get frustrated over one shot, they just drop another ball and hit it again. I learned so much watching her. She gave me her contact information and told me she’s always up for a call whenever or a text message which is really cool.”

Kim and Liu are not done with their U.S. travels. Both have earned invitations to the AJGA’s Ping Invitational, which goes Oct. 10-12 in Stillwater, Okla., and the Tournament of Champions, scheduled for late November in Palm Beach Gardens, Fla.