Vaccine passports won’t be required to play golf in British Columbia, but courses are reminding their guests that proof of vaccination will be required to use other services.

In an email to members and guests, Golden Eagle Golf Club in Pitt Meadows says proof of vaccination will be required for indoor and outdoor dining at the club.

“Staff have been instructed not to serve any group that has one or more individuals that will not show proof of vaccine,” the club said in its email. “Any abuse verbal or otherwise towards staff or other guests will not be tolerated.”

Many courses will allow access to certain areas of the clubhouse -- like washrooms -- to unvaccinated players. In an email to members and guests, the GolfBC Group said proof of vaccination will not be required to check in for a round of golf or to access the retail area of their clubhouses. GolfBC is also not requiring proof of vaccination at its courses’ driving ranges or practice facilities.

However, some clubs are closing all areas of their clubhouse, including lockers, to unvaccinated players. “So if you have anything in your locker you had to get it between now and Sept. 13,” said Vancouver Golf Club general manager Richard Creally.

Creally and Point Grey general manager Adam Zubek both acknowledged having given serious consideration to closing access to their courses to unvaccinated members. “We surveyed our members in advance and the reaction was visceral from fully vaccinated members saying don’t let them on the property,” Zubek said. “There is a strong support in our private club world to try and keep the unvaccinated away. However, we are trying to stick as close to the PHO (Public Health Order) as we can, so we are allowing unvaccinated members access to the golf course.”

STOUFFER ADVANCES: Nanoose Bay’s Shelly Stouffer has advanced to the Round of 16 at the U.S. Senior Women’s Amateur Championship in Alabama. Stouffer, who won both the B.C. and Canadian Senior Women’s titles earlier this summer, emerged from 36 holes of stroke play as the No. 10 seed. She defeated Maria Castillo of Spain 2&1 in their Round of 64 match on Sunday. She then defeated Rosie Cook of Bend, Ore. 4&3  in her Round of 32 match Monday morning.

Sandra Turbide of Maple Ridge lost her Round of 64 match 3&2 to American Maggie Leef. Ontario’s Judith Kyrinis also advanced to the Round of 32, but lost her match on the 19th hole to American Lara Tennant. Round of 16 matches go Monday afternoon, with the quarter-final and semi-final matches scheduled for Tuesday. The championship match will be played Wednesday.

BACK ON COURSE: The University of B.C.‘s men’s and women’s golf teams return to NAIA play for the first time since 2019 this week. The men are playing host to the UBC Thunderbirds Invitational and the women are hosting the UBC Gail Moore Intercollegiate on Monday and Tuesday at Sudden Valley Golf Course in Bellingham. In pre-season polls, the UBC men and women were selected as favourites in the Cascade Collegiate Conference.

WIN-WIN FOR TAYLOR: Nick Taylor did what he usually does at his annual charity pro-am at Ledgeview Golf Club in Abbotsford. He helped raise a lot of money and won the tournament. Taylor shot a five-under 65 and edged Vernon pro Bryce Barker by one shot. More importantly, the Nick Taylor Charity Pro-Am presented by Alga Bros. Developments was once again a sell-out. 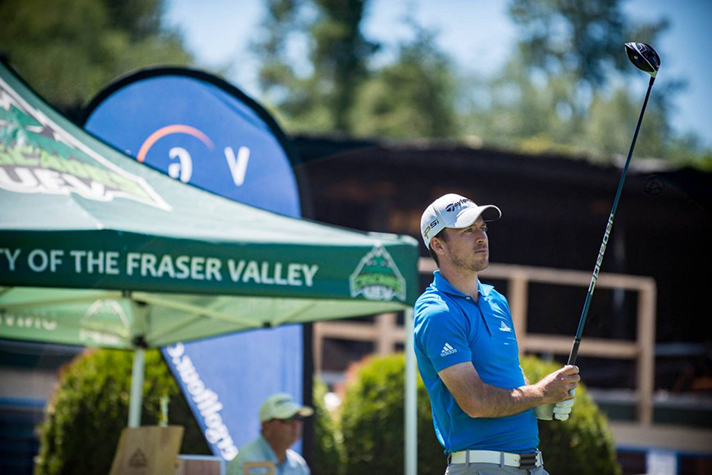 The final count for this year’s tournament is not in but in its 11-year existence the event initially started by another former PGA TOUR regular, Ray Stewart, has raised more than $1 million. Proceeds benefit the University of the Fraser Valley men’s and women’s golf teams as well as two local charities selected by Taylor and his wife Andie: Abbotsford’s Archway Community Services and Chilliwack Community Services.

Taylor, who has won the tournament in four of the five years since lending his name to the event, starts a new PGA TOUR season later this week at the season-opening Fortinet Championship in Napa, Calif. “I was a little rusty today but I still hit some nice shots and played well,” Taylor said after his round at Ledgeview. “I’ve been home for almost a month now, so it’s been nice to have a break. I didn’t put the clubs away totally, but I played enough to keep sharp. I hadn’t been here for seven or eight months so it was nice to get back and see family and friends I hadn’t seen in so long.”

B.C. FOURSOME: Abbotsford’s Adam Hadwin, Roger Sloan of Merritt and Surrey’s Adam Svensson will join Taylor in the field for the Fortinet Championship, which in recent years was known as the Safeway Open. Svensson recently earned a promotion from the Korn Ferry Tour, where he won twice in 2021. Other Canadians in the field include Michael Gligic, Taylor Pendrith and David Hearn.

SEASON FINALE: Langley’s James Allenby tied for 37th at the rain-shortened Forme Tour Championship in Dallas, Pa. The event was cut to 54 holes and Allenby finished at five-under par, 12 shots behind winner Brad Miller of Baltimore. Allenby made the cut in all but one of the Forme Tour’s eight events this summer and finished 44th on the points list. He’ll remain exempt for next season. Kimberley’s Jared du Toit missed the cut at the Tour Championship and fell out of the top 60 who retain status for next year. Du Toit finished 66th. Richmond’s Chris Crisologo finished 81st, Riley Wheeldon of Comox was 117th, while Lawren Rowe of Squamish was 118th. Du Toit is in the field for this week’s ATB Financial Classic in Calgary on the Mackenzie Tour.

CALGARY DOUBLE: Mission’s Kevin Stinson of Cheam Mountain Golf Course in Chilliwack will also be teeing up in the Mackenzie Tour’s Calgary stop. But before that tourney begins, Stinson will be competing in the PGA of Canada Assistants Championship, which is being played early this week at the Winston Golf Club in Calgary. Stinson has won multiple events on the Vancouver Golf Tour this season, most recently at the Whistler Open earlier this month at Whistler Golf Club.