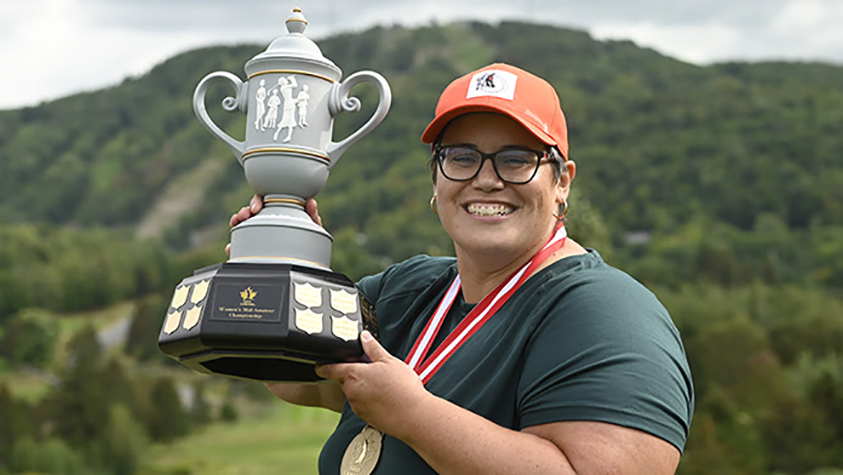 Proteau entered Thursday’s final round one stroke back of Marler, who held the Mid-Amateur lead for the first two rounds, and whose first-round 72 would end up being the lowest and only single-round score under par for the entire tournament.

The two B.C. golfers were tied at 5 over par after the final hole of the 54-hole tournament, forcing the division to go to a sudden-death playoff. Proteau came out victorious after a birdie on the first playoff hole.

“Feels unbelievable,” said Proteau. “I’ve had a few years – seven specifically – since my last win at the national level, and I’ve definitely had some doubts for the last few years if it would happen again. So, this one, by far, is the most meaningful and it ranks way up there just generally with anything I’ve achieved in Canadian golf,” said Proteau.

Proteau, the first golfer to ever be inducted into the University of Victoria’s Sports Hall of Fame back in 2020, collects her sixth career Women’s Mid-Amateur title—she previously won in 2009 and four consecutive years from 2011-2014.

With a final score of 7 over par, Shelly Stouffer of Nanoose Bay, B.C., captured both the Mid-Master and Senior division titles and finished third in the Mid-Amateur division.

“It feels amazing, it feels awesome,” said Stouffer, who led the Senior division through 36 holes. “I wanted to play last year and because of COVID, it never happened. So, it’s great to be here this year.”

By winning the Senior division, Stouffer receives an exemption into the 59th U.S. Senior Women’s Amateur Championship at The Lakewood Club in Point Clear, Ala., from Sept. 10-15, 2021 and the fourth U.S. Senior Women’s Open at NCR Country Club (South Course) in Kettering, Ohio from Aug. 25-28, 2022. Both Stouffer and Proteau receive exemptions into the 2022 Canadian Women’s Amateur Championship at Westmount Golf & Country Club in Kitchener, Ont., July 19-22.

Defending champion Judith Kyrinis of Thornhill, Ont., finished at 8-over par for the championship, placing her in fourth for the Mid-Amateur division and runner-up to Stouffer in both the Mid-Master and Senior divisions. 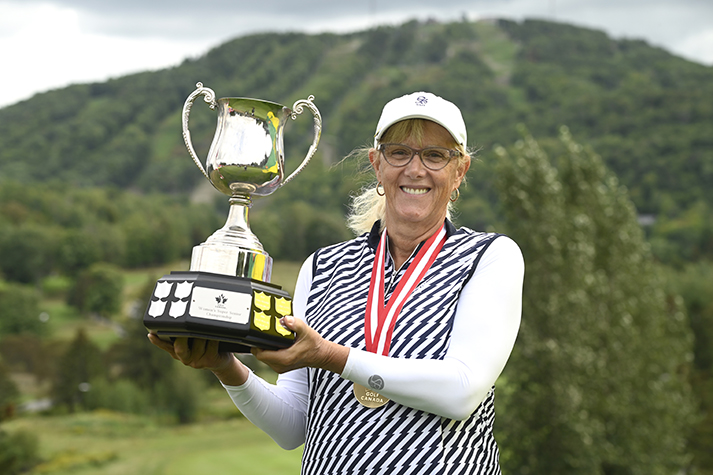 Helene Chartrand of Pincourt, Que., took home the Super Senior title at 8-over and finished alongside Kyrinis as a runner-up for the Senior division title. Chartrand was also the 2014 Canadian Women’s Mid-Master Champion (which was conducted concurrently with the Women’s Amateur at Craigowan Golf & Country Club in Woodstock, Ont.) and the Senior Champion (held at Club de golf Milby in Milby, Que.).

“I’m thrilled,” said Chartrand. “Second behind Shelly, who’s a great golfer and with Judith, I know their resumes and they’re outstanding golfers, and to be there with them, even if it’s second, I’m really, really happy at my tournament week.”

The 2022 Canadian Women’s Mid-Amateur & Senior Championship will be played at Breezy Bend Country Club in Headingly, Man., from Aug. 29 to Sept. 1.