Sport BC Announces 54th Annual Athlete of the Year Awards 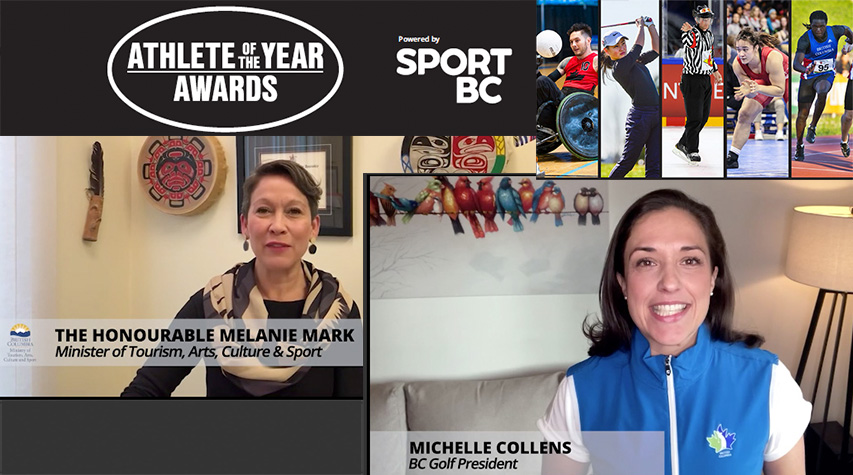 Among The Awards Presented At The Sport BC AOY Virtual Event Was The Inaugural 'Delivering On Diversity' Award, Won By British Columbia Golf

Sport BC celebrated the 54th Annual Athlete of the Year Awards virtually on Thursday, March 25, 2021. The event was hosted by CBC’s Scott Russell recognizing the province’s best in amateur sport including athletes, coaches, teams, and officials for outstanding performances in their sport over the 2019 season.

“While our celebration was delayed, the Virtual Athlete of the Year Awards was a true celebration of sport in our province, the recipients represent an exceptional 2019 in BC sport and we would like to thank everyone for their patience in announcing our winners. We congratulate all of our finalists and the organizations they represent”, shares Sport BC’s President and CEO, Rob Newman.

“We were proud to celebrate the winners. The last year has been challenging for everyone and it confirmed the importance of Sport in our lives; I personally would like to thank our members for everything they have done over the last year.”

“I was honoured to present the first Delivering on Diversity Award this year to recognize the important work being done in advancing equity, inclusion, and accessibility in sport. This award, along with all of the other awards, underscores the talent, strength and commitment of B.C.’s sport community. Congratulations to all of the nominees. Your accomplishment and contribution to sport are truly inspiring.”

Sport BC congratulates all the Athlete of the Year Awards’ Recipients:

College Athlete of the Year

Athlete with a Disability

Male Coach of the Year

Female Coach of the Year

Junior Female Athlete of the Year

University Athlete of the Year

Team of the Year

Official of the Year

Senior Male Athlete of the Year

Junior Male Athlete of the Year

Master Athlete of the Year

Senior Female Athlete of the Year

An additional six awards were presented including the Best of BC, KidSport BC Community Champion, Harry Jerome Comeback, Daryl Thompson Lifetime Achievement Award and In Her Footsteps Honourees.

The KidSport Community Champion, supported byRitchie Bros. Auctioneers, is presented to an individual who has made a significant and meaningful contribution to KidSport.

The Harry Jerome Comeback Award is presented to an individual who succeeded in their sport after suffering a significant and unique setback.

The Daryl Thompson Lifetime Achievement Award, sponsored by the BC Games Society, is presented to an individual who has contributed their time in an extraordinary way to sport over a long period of time and/or has made a major contribution to amateur sport in British Columbia. The award is named after the late Daryl Thompson an inspiring former Chair of Sport BC.

The recipients have demonstrated their commitment to being role models and mentors of young women; they have opened doors to increase accessibility and promote opportunities for participation. They have strived, struggled, fallen, picked themselves up and continued – because they know the benefits and love what it means to be deeply involved in sport and physical activity.

In Her Footsteps . . . Celebrating BC Women in Sport

To see the recipients of the SportBC Presidents Awards - CLICK HERE

To watch the 54th Annual Sport BC Athlete of the Year Awards please click the link below. #SportBCAOY

Sport BC believes in the power of sport and is committed to building stronger communities through positive sport experiences. Our goal is to enhance and support sport participation in British Columbia ensuring everyone has the opportunity to thrive. Through our KidSport BC, BC Amateur Sport Fund, and ProMOTION Plus along with our services Sport BC Insurance, and Payroll and Group Benefits; Sport BC supports our sixty plus member organizations. Keep up to date @SportBC