Trevor Brown chuckles as he recalls the moment he decided to get serious about learning the rules of golf.

Brown was playing a round with a close friend many years ago and they had a few dollars riding on the match. Brown hit a shot that ended up in a penalty area and that’s where the trouble started and ended with Brown reaching into his wallet to pay his buddy.

“I was in a penalty area and started hitting the grass with my practice swings and he said, ‘hey, you just lost the match’ to me,” Brown says. “And I was like, ‘what do you mean, I'm your friend.’ He said, ‘that doesn’t matter, this is golf. You owe me five bucks.’ So I said to myself, you know what, I am going to learn the rules.”

Brown did just that and in the ensuing years, he has helped so many others learn the rules of the game. Brown, a longtime member of Uplands Golf Club in Victoria, is one of the three British Columbians who are receiving Distinguished Service Awards from British Columbia Golf.

Barb Silvester of Vernon and Michael Parker of Parksville are also receiving the award, which recognizes those who give back to the game.

Rules aficionados -- and Brown is certainly one of those -- would note that under the revised rules of golf introduced in 2019 Brown would no longer receive a penalty for taking a practice swing in a penalty area. Brown began working as a rules official about 13 years ago, initially at junior events. The late Barry Anderson was Brown’s rules mentor and he gave Brown some practical advice when dealing with junior golfers.

“He said don’t even tell them about a rule while they are around their friends,” Brown says. “Try to catch them while they are alone and try to explain it to them. And if it wasn’t a significant advantage you just explain the rule and tell them that they should be careful not to do that again. It’s fun, they say, oh, thanks, mister I will do that. I enjoy working with the juniors. For the most part the kids are really good, they really enjoy the rules and want to learn them.” 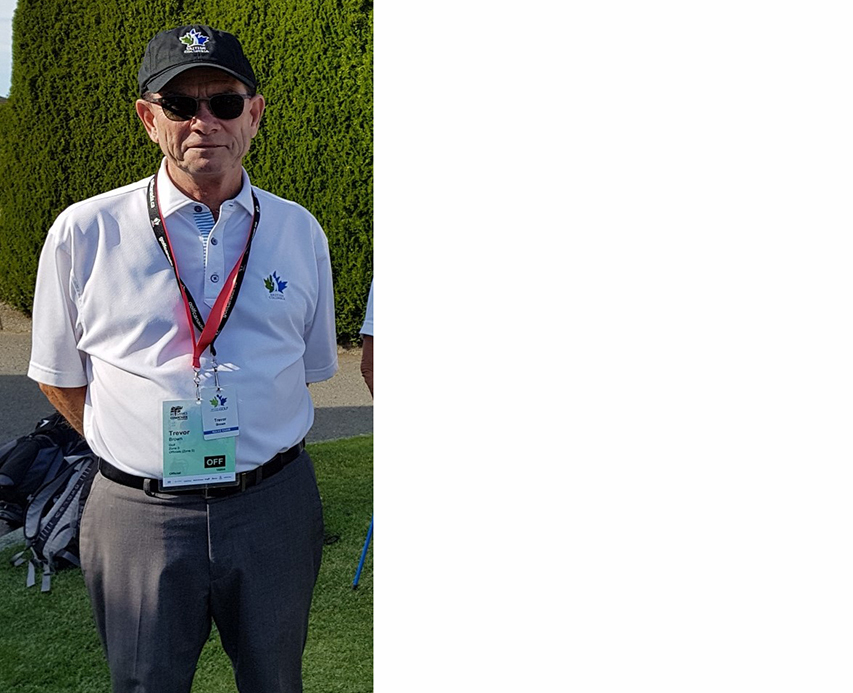 The deeper he delved into the golf rules world, the more Brown realized how important they are to the game’s integrity. “I realized how complex the game of golf is and needs these kinds of rules,” he says. “Unlike a basketball court, which is similar anywhere in the world, every golf course is different.”

Brown has become a fixture at Zone 5 events in the Victoria area. In recent years he has spent considerable time teaching the rules, leading seminars at Victoria-area clubs and has regular sessions with the University of Victoria golf teams, Camosun College and Claremont high schools. “I really enjoy the teaching part of it, you get a kind of satisfaction when you see the students’ eyes get wide and the light bulb goes on when they start to get it.”

Brown has been club captain at Uplands, where he received a lifetime honorary membership, for the last 11 years. Victoria’s Craig Doell, a three-time Canadian Club Champions champion and a longtime fixture on the B.C. amateur golf scene, appreciates all that Brown has given to the game. “Trevor has contributed massively to tournaments on the Island and all over B.C.,” Doell says.

“He is a high-level rules official so he has put in a lot of time and effort. And he has coordinated all of our rules officials in our zone to make them a well-organized group to officiate at all tournaments in our zone. Not only that, he has been the Uplands men’s captain for many years. So he has put a lot in at the club level, too. He is just a terrific guy.”

Brown says he realized he had become something of a golf-rules junkie when he started taping golf telecasts, not for the golf but for any potential rules situations. “I fast forward through the golf and when I see a ruling I stop,” Brown says with a laugh. “That’s how bad it is.”

Barb Silvester has been a fixture at Vernon Golf Club since joining the club in 1976. She hadn’t played much golf prior to joining Vernon, but she had played lots of badminton in her younger days and the hand-eye coordination required for that sport definitely helped her transition to golf. She quickly fell in love with the game.

“I like the game, it teaches one patience and forces you to stay under control, having to deal with both a good shot and a poor shot,” she says. “I always say at this stage it is a nice walk in the park. It has been a good sport. Golf has really been my only sport for many years. I tried a bit of curling, but golf I really enjoy it.” 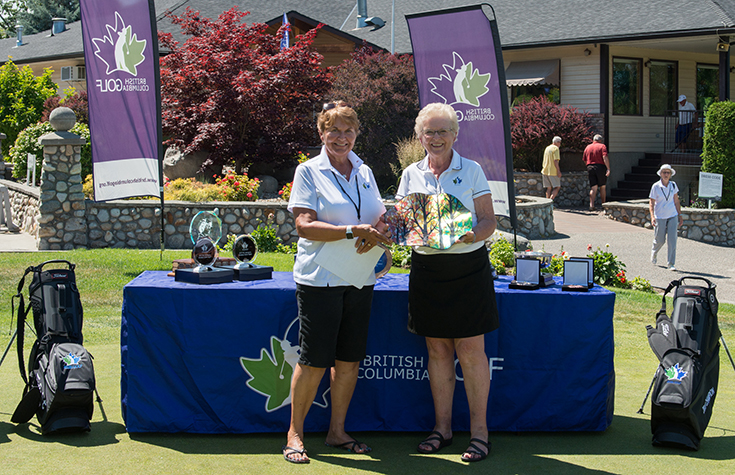 In her 45 years at the club, where she is now an honorary life member, Silvester has pretty much done it all. “Oh my gosh, Barb has been an amazing member here,” says Vernon GC general manager Julie Knobloch. “She has sat on the board, she has sat on the ladies executive, she is heavily involved in liaison between British Columbia Golf and our club. Any of the tournaments we have held here, she usually does the rules and is very knowledgeable. Barb is always willing to step up to the plate. I cannot say enough good things about her.”

Silvester began to take an interest in rules a few years after becoming a member at Vernon. “I would say in the early 80s I became interested in rules and attended many workshops with B.C. Ladies Golf,” she says. “I predominantly did a lot of volunteering at the club and I held many different positions from the business ladies captain to the ladies captain, director, I have been on the board for quite a few years.

"I continued with the rules and I became involved in the zone. It used to be District 3 for the Ladies and then our Zone 2 and I am still there. At the zone level I have been second chair, vice chair, chair and then rules and zone council rep. I enjoy working with people, and I just also like working with juniors and just seeing their development. At this stage I am more or less into rules and looking after tournaments at my club and the zone. I am now a social golfer.”

With her wealth of experience, Silvester doesn’t feel much in the way of nerves when she is officiating tournaments. “It’s like 99 per cent relaxing and that one per cent fear,” she says about rulings she makes during tournaments. “I feel like if I am in doubt I will always consult the rules book. Generally, I have been okay.”

Part of being a rules official means enforcing pace of play. Silvester chuckles about how her many friends at the club know they can’t dawdle on the course. “It’s like, here comes Barb, let’s move it,” she says. “You just have to wander around and as soon as they see you they know.”

The third Distinguished Service Award recipient is Michael Parker, a longtime member of Morningstar Golf Course in Parksville. He has been a rules official since 2006. “It allows me to give something back to the game,” Parker says. “I have been golfing since I was eight years old and really enjoyed it. Golf rules means everyone should play golf the same way. Along with your handicap it evens the playing field. I am kind of a golf purist and it makes sense to me to help people understand how to play the game.”

Parker is a regular at Zone 6 events and has also worked as a rules official at Mackenzie Tour events in B.C. and Golf Canada national championships. One of his most memorable rulings came at a Mackenzie tour qualifying school a couple of years ago at Crown Isle Golf Resort in Courtenay.

A player on the fifth hole thought his tee shot had found water and took a drop and played what he thought was his third shot. He then discovered his original ball had not entered the hazard. When Parker told him he’d receive a two-shot penalty for playing a wrong ball and would have to return to the tee under the stroke and distance penalty, the player was not happy. 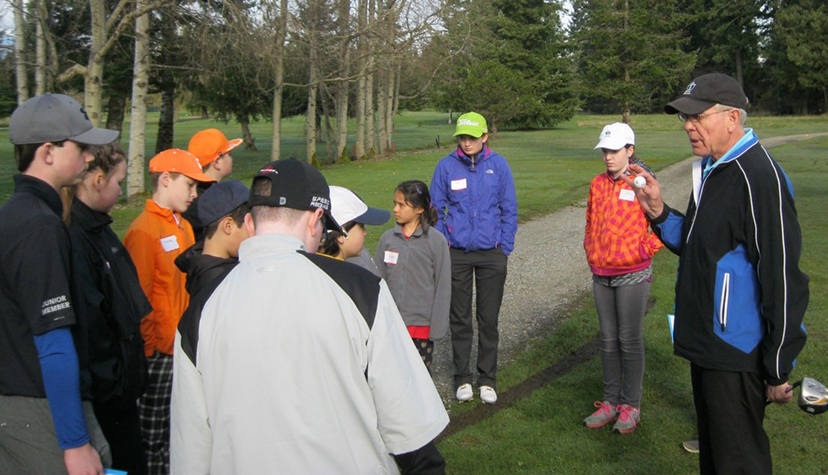 “He heaved his club about 170 yards,” Parker says. “It was a helluva nice throw. He was yelling and screaming and using swear words and this and that. I had to tell him any more activity like that and you are apt to be disqualified. He settled down after that and life went on.”

Parker was nominated for the Distinguished Service Award by British Columbia Golf board member Michael Cook. “Mike just continues to give, give, give,” Cook says of Parker. “His work goes right from the club level to the national level, which I think makes him so deserving of this award.”

Parker finds the rules work he does with juniors especially rewarding. “The kids are much more eager to understand what the rules are,” Parker says. “And they listen. . .we give the juniors a little bit more latitude. If we see them doing something wrong and it really doesn’t impact things we’ll go up and tell them you shouldn’t have done that.

"I think you have to have a lot of empathy when you approach a junior. You don’t want to quote a rule number. You want to use it as a learning experience for the junior. And that is one of the traits of a good rules official, being empathetic with the player and not coming across as an autocrat, but more as a teacher or mentor.”