Three-way Tie For The Lead After First Round Of B.C. Senior Men’s Championship 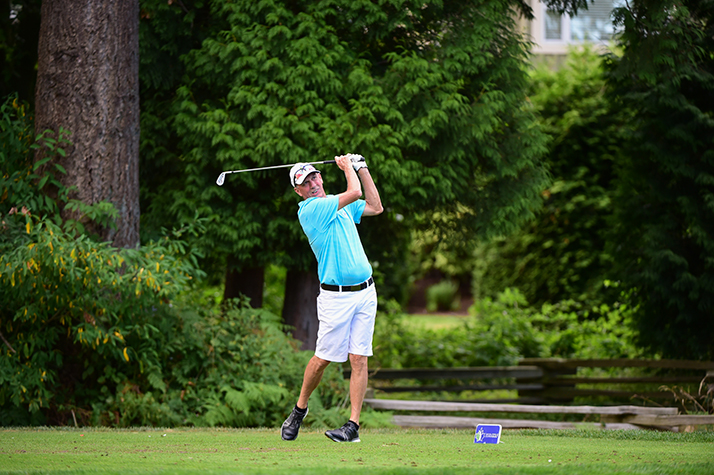 ROBERTS CREEK -- Norm Bradley has Doug Roxburgh right where he wants him. That would be behind him. Now the challenge is to keep him there.

The Kelowna resident shares the lead with Greg Bismeyer of Mission and Mike Mannion of Gibsons.

Bradley would have had the lead outright if not for a double-bogey on the par 4 18th hole. After driving it into trouble, Bradley chipped out and figured he had hit a perfect wedge to the two-tiered 18th green.

“It was within six inches of being perfect,” Bradley said. “I hit a bad tee shot, played it out and thought I hit a really good shot. The ball jumped forward on an upslope rather than jump back. That’s just a bit unlucky.”

Bradley’s ball settled on the upper tier above the hole and he had no chance of stopping his putt anywhere near the hole. He went on to three-putt, but tried not to let it spoil a good day.
“I think any time you are under par out here you have played well,” said Bradley, a 62-year-old retired teacher.

“I made a couple putts, managed things well and was having a nice time out there, but that was just a little unfortunate on the last hole. That’s golf. That’s why we play.”

Roxburgh, the British Columbia golfing legend, is trying to win his fourth straight and sixth overall B.C. Senior Men’s title. He opened with a two-over 74 that left him tied for 10th place. “I probably could have got a little more out of it,” Roxburgh said. “I made a couple of sloppy bogeys on 14 and 15 and I had three three-putts on the front nine. So I could have been around par.”

The undulating greens at Sunshine Coast Golf & CC figure to be where this tournament will be won or lost. “You have to work on every hole, whether it’s the downhill part of them, the uphill part of them, the slope part of them,” Bradley said of the greens. “They are not easy to read and they can be really fast. You never have anything where you go, 'I am going to make this.' That's not easy, it’s hard.”

Bismeyer, who won the B.C. Mid-Masters title in 20xx at Nanaimo Golf Club, carded his 71 after almost missing his tee time. “I thought I teed off just before noon,” Bismeyer said with a sheepish grin. It turned out his time was actually 10:27 a.m. and his playing partners were on the tee when Bismeyer arrived at the course.

He raced to the tee, promptly birdied his first two holes and was on his way. “I needed 10 holes to settle down,” Bismeyer said. “It’s amazing how it rattles you. But I didn’t get into any real trouble out there today. I hit fairways and greens, sunk one long putt, and putted pretty well.”

Mannion could turn out to the guy to beat this week. He has been a Sunshine Coast member since 1987 and knows the course inside out. He is the current club champion and senior club champion.

Mannion acknowledges he has a big home-course advantage that is particularly important on a course that presents such a challenge on the greens. “I would say over the best players I may have a three-shot advantage,” the 58-year-old said.

“It’s a big advantage. When you only get in one or two practice rounds you get an idea of the course, but I just step on the tee and I know exactly where I am aiming and the exact shot I am trying to hit. I have been everywhere that is wrong. It’s a huge advantage at this course. I have set some expectations for myself this week.”

Harry Ferguson of Invermere, the 2016 senior men’s champion, is in a group of three players one back at even-par. “It’s the greens that are the challenge here,” Ferguson said. “I’m sure you can ask just about everybody here and they’ll say the same thing. The greens are just diabolically tough.

“Even off the tee I'm looking to approach it from an angle to get an angle at the pin because if you don’t all of a sudden it's running away from you and it is so hard to score that way.”
Lance Lundy of Pemberton and Jim Shaw of Mission, last year’s runner-up, also opened with 72s.

CHIPS SHOTS: The 54-hole competition continues through Thursday. There is no 36-hole cut. . .Most of the 127 players in the field are wearing orange ribbons on their caps in honour of Gudmund Lindbjerg, a past B.C. Senior Men’s champion who died earlier this year.