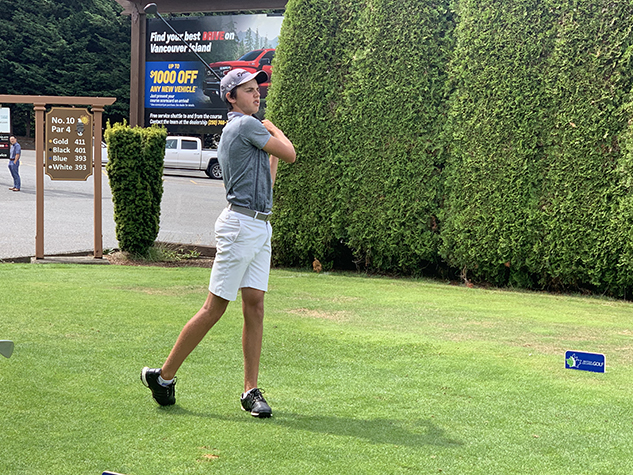 The 16-year-old from Victoria won the B.C. Junior Boys Championship last month at the Okanagan Golf Club’s Bear Course in Kelowna. On Thursday, he has an opportunity to hoist the B.C. Juvenile Boys’ trophy at Cowichan Golf & Country Club.

Bishop shot a four-under 66 in Wednesday’s second round of the 54-hole event and sits at five-under par through two rounds. That has him tied for the lead with North Vancouver’s Niklas Jaakkola.

Three championships are being decided this week on Cowichan’s A.V. Macan-designed layout: The B.C. Boys and Girls Juvenile Championships for players aged 16 and under and the B.C. Junior Girls title for players 18 and under. Michelle Liu of Vancouver and Abby Chow of Coquitlam are tied for the lead in both the Juvenile and Junior Girls divisions.

British Columbia Golf’s championship tournament schedule has been condensed due to the COVID-19 pandemic and when Bishop won at Okanagan Golf Club, the Junior Boys Championship was being contested along with the B.C. Amateur and B.C. Mid-Amateur Championships. Bishop says he’s feeling more pressure this week.

“It is kind of strange,” said Bishop, who plays out of Victoria Golf Club. “This feels more stressful than the Juniors. I was playing for the Am (B.C. Amateur) there and was lower on the scoreboard. Now that I am on top, it’s a little more nerve-wracking. It should be a fun round tomorrow and I am really excited to play. I'm just going to do what I usually do, just go out there and play my best golf, focus on every shot and don’t let other players get to me. Play the course, not the man.”

Bishop had five birdies and an eagle in his round Wednesday. “I pretty much hit good wedge shots today,” he said. “My putting wasn’t there, but I got it close enough to the hole where I could make some putts.” His eagle came on the par 5 16th hole. “I hit a four-iron to about seven feet and made the putt,” he said. 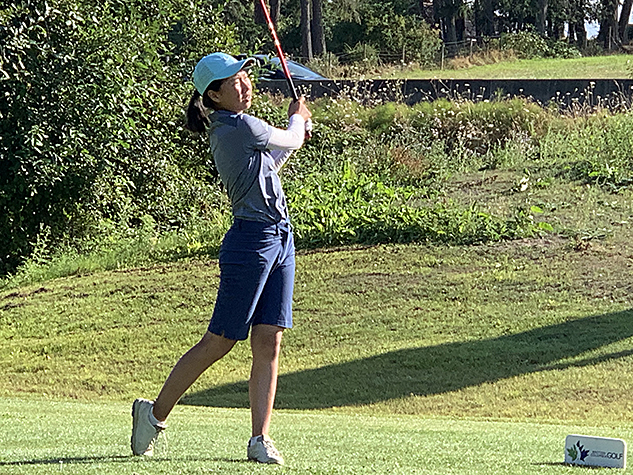 Jaakkola also eagled the 16th en route to his two-under 68 on Wednesday. “I hit a pretty good drive and had about 190 (yards) left,” said Jaakkola, who plays out of Seymour Golf & Country Club. “I hit a six-iron to about 40 or 45 feet and made that one. That was a really big moment for me.”

Jaakkola said he’s just trying to stay patient during his rounds. “I’m just playing really steady, consistent golf,” he said. “It’s just about hitting the middle of the green, being patient and eventually I am going to make putts. I trust myself to do that. I feel like I executed that really well today. I only had one bogey.”

Langley’s Danny Im is alone in third place at three-under par after firing a three-under 67 Wednesday. He made the turn in 31 strokes after eagling the par 5 ninth hole. The leading girls played later in the day Wednesday and Chow shot an even-par 70 Wednesday that included two birdies and two bogeys.

“Overall I am quite happy with the round,” said Chow, a 16-year-old who is heading into Grade 11 at Gleneagle secondary. “I tried not to get too high or too low. I bogeyed the first hole, so it was a slow start. But I was able to birdie the second hole and get some momentum back.”

Liu, a 13-year-old who plays out of Shaughnessy Golf & Country Club, shot a two-over 72 Wednesday that for the second straight day included a double-bogey on the par 4 17th hole. “Hopefully, I can play that hole better tomorrow,” Liu said with a smile. “Abby and I are good friends and I am really looking forward to playing with her tomorrow. I am quite surprised there weren’t any lower scores today.”

Jennifer Gu of West Vancouver, Luna Lu of Burnaby and Lauren Kim of Surrey are tied for third at four-over par. Gu holed out from 50 yards for eagle on the par 5 ninth hole en route to her two-over 72 on Wednesday. “Today my putter was very dry,” said Gu, a 17-year-old who is competing for the Junior championship. “It’s a three-day tournament so i just wanted to stay close. I know the birdies will come, hopefully tomorrow because there is only one more day.”

Kim double-bogeyed her first hole and shot a three-over 73. “I definitely need to start attacking pins tomorrow,“ Kim said. Lu had the day’s best round on the girls’ side of the draw, shooting a one-under 69.

CHIP SHOTS: Parksville’s Gavyn Knight shot a four-under 66 Wednesday to move into fourth place at two-over par. . .The field was cut in half for Thursday’s final round.