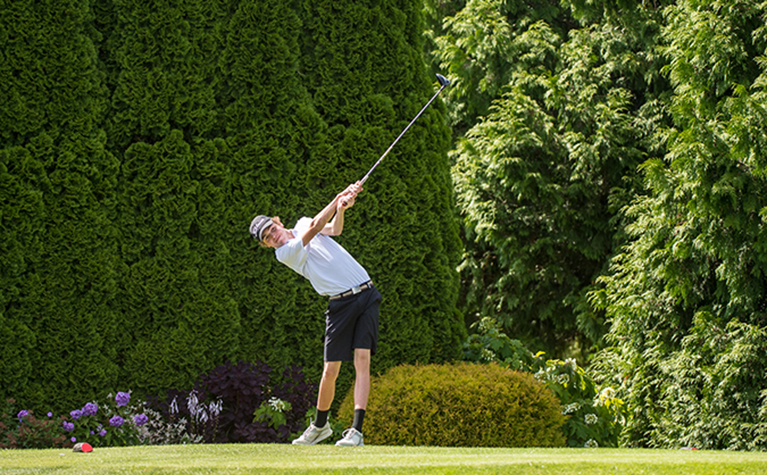 DUNCAN -- Despite a swing and a miss from a difficult lie on the final hole, North Vancouver’s Niklas Jaakkola shot a three-under 67 Tuesday to grab the first-round lead at the B.C. Juvenile Boys Championship at Cowichan Golf & Country Club.

Jaakkola, a 16-year-old who plays out of Seymour Golf & Country Club, was five-under for his round when he arrived on the 18th tee. But a wayward tee shot led to something of an adventure and an eventual double-bogey to end his round.

“It was just an uncommitted swing off 18 and I just got really unlucky to end up behind that tree, but that’s golf,” said Jaakkola. “It was right up against the trunk and I tried to play my second shot from my knees and I missed the ball. Had to count that one. It was an adventure.”

But Jaakkola, who is entering Grade 11 at Seycove Secondary, wasn’t going to let it spoil what otherwise was a solid round. “There were lots of positives,” he said. “I hit it really well and putted really well. I made a lot of putts today. I think three-under is a pretty good score.”

Thirteen-year-old Michelle Liu of Vancouver leads both the Juvenile and Junior Girls competitions after firing an even-par 70 on Tuesday. Like Jaakkola, Liu also had some trouble late in her round. She was two-under through 16 holes, but double-bogeyed the par 4 17th hole.

“I think I played decent,” said Liu, who plays out of Shaughnessy Golf & Country Club. “I made two long putts. My putting overall was pretty good today, but that double on 17 was disappointing.

“My putting saved me quite a few times today. My swing was only okay today. There were some good shots and some not so good shots.”

A year ago, Liu was teeing it up alongside the world’s best players at the Canadian Pacific Women’s Open. She qualified for the LPGA event by finishing as the low Canadian at the 2019 Canadian Women’s Amateur Championship. Liu, who is about to enter Grade 9 at Crofton House school, called that experience invaluable. “It doesn’t seem that long ago, honestly,” she said. “I was so lucky to go and play that event.”

Liu has a one-shot lead over a pair of Surrey players, Lauren Kim and Angela Arora, and Anna Huang of Vancouver. Kim celebrated her 15th birthday Tuesday in style, with an eagle on the par 5 ninth hole. She holed her uphill chip shot from about 20 yards.

“I thought 'just make sure you get over the bunker and land it between the flag and lip,'” Kim said. “I heard it land on the green and then I heard like a thud. I was like, 'oh, what was that?' Then one of the coaches out there said, ‘It went in the hole, you got an eagle.’ It was pretty shocking.”

Huang, who also fired a 71, is one of two 11-year-old girls competing this week. “Being so young makes me more comfortable,” said Huang, who's about to enter Grade 7. “I am smaller so if I don’t shoot the best it doesn’t really matter.”

Jaakkola is a member of British Columbia Golf’s new Junior Performance Team and credited that experience with helping prepare him for this event. “We had a training camp about a month ago,” he said. “It was really eye-opening for me, just because every part of your game was exposed and I just realized what I needed to work on. I have really grinded over the last month and am really pleased with where my game is.”

He enters Wednesday’s second round with a two-shot lead on William Bishop of Victoria. Bishop, who recently won the B.C. Junior Boys Championship at Okanagan Golf Club’s Bear Course in Kelowna, finished his round strong. “I made a birdie on the last to go under par which is big for me,” Bishop said. “I finished strong with birdie-par-birdie.”

Bishop said he’s trying to ride the momentum he gained from his win at the B.C. Junior. “The win did give me some confidence for sure, but I am just out here like usual playing my regular game and seeing what I can do. “I am kind of that... at the top for the moment. We’ll see how that plays out. If I can get a couple more rounds in the 60s I could do well here.”

Daniel Im of Langley and Cole Humphreys of Kelowna were tied for third after shooting even-par 70s.