Nick Taylor First Broke 80 On Ledgeview Golf Course, Then 70. Now He Is On A Quest For A Sub-60 Round - Image Credit Darren MacDonald/UFV Athletics

Ledgeview Golf Club is as comfortable as a pair of old shoes for Nick Taylor, who feels right at home at the Abbotsford layout he literally grew up on.

It seemed fitting that as he prepares to head back to the PGA TOUR after a nearly four-month absence, Taylor dropped by Ledgeview to play one final round. He was there Friday, June 26th, as the host of his annual fundraiser for the University of the Fraser Valley -- the Nick Taylor Charity Pro-Am.

Taylor stood on the first tee welcoming players and posing for team pictures before teeing it up himself in the final group of the day.

Ledgeview, Taylor says, never gets old. He’s played the course about 10 times since returning with his wife Andie and son Charlie to Abbotsford from their Scottsdale, Arizona residence during the PGA TOUR’s hiatus.

It’s probably not a coincidence that when Taylor and Andie decided to buy a second home in Abbotsford, they chose a townhouse just a block or two down the road from Ledgeview. “It’s crazy that I have been playing here for more than 20 years,” says Taylor, who earlier this year battled Phil Mickelson down the stretch and won the AT&T Pebble Beach Pro-Am for his second PGA TOUR title.

Taylor joined Ledgeview as a junior member when he was 10 or 11 and has countless childhood memories of his rounds on the course. A number of golfing milestones come to mind as he reminisces about junior golfing days at Ledgeview.

Always One To Give Back To The Game, Nick Taylor Delights Some Young Fans With Autographed Golf Balls - Image Credit Darren MacDonald/UFV Athletics

Taylor smiles and adds that he has one more Ledgeview milestone he’d like to attain. “My quest to shoot in the 50s is my new objective,” he says. “I have come close a few times, but I still haven’t done it.”

His closest call came last summer when he joined Abbotsford pro Luke Bogdan for a round. Several Ledgeview juniors followed the duo during their round. “I shot 60,” Taylor says. “I had a putt for 58 and ended up three-putting for 60. All the kids weren’t very impressed.”

Chances are that Taylor, one day soon, will crack 60 at Ledgeview. And when he does it just might be in a really big way. “I remember when I broke 80 the first time I shot 76,” Taylor says. “I had shot 80 probably seven times in different ways. I’d bogey 18 or I’d collapse down the stretch. When I broke 70 for the first time it was 67. For whatever reason, whenever I broke through it was like by three or four shots.”

Taylor’s game has outgrown Ledgeview in many ways. It measures only 6,130 yards from the tips, but Taylor still loves teeing it up there. “It is not as challenging as it used to be for me, but it is still a fun course to play,” he says. “I hit a lot of drivers and it’s narrow to where I am trying to hit it, so that is something I can work on here.”

And your short game always gets a good workout at Ledgeview, which is renowned for its challenging greens. “I think that has been the trademark for a lot of junior players who have grown up playing here. You had to develop a great short game to play well here.”

Ledgeview, of course, has helped produce several other top players including Adam Hadwin, whose dad Gerry manages the course, James Lepp and Ray Stewart. Taylor has been delighted to see progress continuing on construction of Ledgeview’s new clubhouse.

Its old clubhouse was destroyed by fire in 2016 and it took considerable lobbying by Gerry Hadwin, former club president (and Taylor’s father-in-law) Phil Dodd and many other Ledgeview supporters to convince the city to approve construction. “This structure has gone up really fast,” Taylor says. “It’s nice to see the progress being made. It’s exciting to see it happening.”

A the end of the day, Chris Bertram of the UFV Cascades golf program confirmed that the event managed to generate over $100,000. This year’s main charity beneficiary is the UFV food bank. Partial proceeds also go to the UFV golf program. 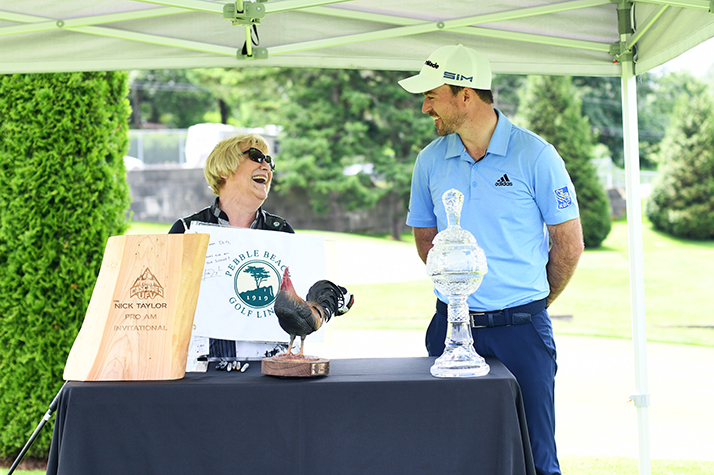 This figured to be Taylor’s final local round before heading south to rejoin the PGA TOUR. “It’s been fun the past while to play some other courses I hadn’t played in a while,” Taylor says. “I’ve been out to play Sandpiper and Mission.”

Taylor thinks he has managed to keep his game in good shape. A round earlier in the week on Northview’s Ridge course in Surrey was testament to that. Taylor fired a 10-under 62. He will return to the PGA TOUR for the Workday Charity Open, the first of two back-to-back events in the Columbus, Ohio area that goes July 9-12.

He will arrive a week early to do some work on his game with coach Mark McCann and get accustomed to living in the PGA TOUR’s COVID-19 bubble. “I have had a long break so I don’t know if I will be flat and not really used to what is going on or I will be over-hyped and a little more nervous than normal,” he says. “Time will tell.”