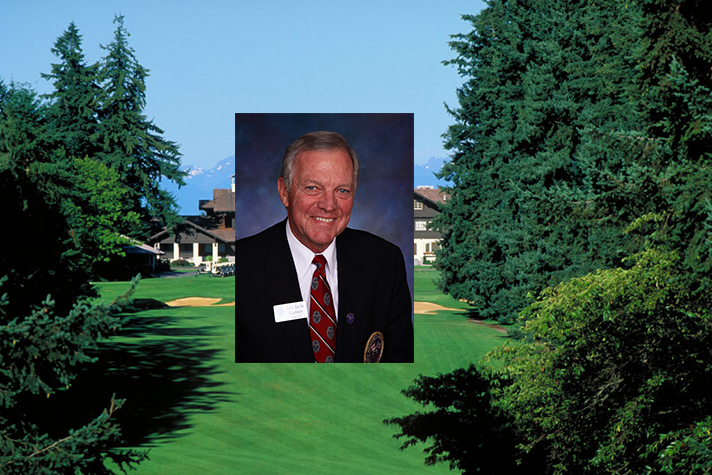 British Columbia Golf wishes to join the Pacific Northwest Golf Association and indeed the entire golf community in expressing our sadness upon the loss of Dr. Jack Lamey over the Christmas Holidays. Dr. Lamey was a very thoughtful and passionate giver to the game of golf and he will be missed by his family, all his friends and acquaintences in and around golf as well as all who knew him.

We share with you here an announcement put out through the PNGA by its Executive Director, Troy Andrew.

Dr. Jack Lamey – Champion, Friend, and Giver to the Game

The game of golf connects people in magical ways. Friendships, family memories, and endless connections that we cherish for a lifetime. I would like to pay tribute to a man who was the embodiment of everything this wonderful game has to offer – my great friend and mentor, Dr. Jack Lamey, who we sadly lost on December 15, 2019, after a courageous battle with cancer. He was 80.

In the fall of 1999 I was hired by then PNGA Executive Director John Bodenhamer to be the director of rules and competition. The first championship I administered for the PNGA was the very popular PNGA Senior Men’s Amateur, being held that year at Crosswater Club in Sunriver, Ore.

It was at that championship that I met Dr. Jack Lamey for the first time – it is easy for me to remember, because he went out of his way to welcome me to the PNGA. I was only 26 years old, nervous and focused on trying to do the best job I could for the PNGA and Mr. Bodenhamer. Jack’s introduction immediately made me feel at ease and part of a family. What I didn’t know at the time was the impact he was going to have on my life.

Jack was an ambassador for the game in the Pacific Northwest. But what attracted people to Jack was his humble and selfless demeanor. He did everything with a high level of integrity and was a true gentleman. I was blessed to be in his inner circle and he became a mentor and person I turned to for guidance at work and in life. He never stopped believing in me, and in 2011 when Bodenhamer left the PNGA to take a position at the USGA, it was Dr. Lamey, who was then serving as the PNGA president, who gave me the opportunity to become PNGA executive director.

I will never forget him looking me in the eye and saying, “We have been grooming you, Troy. It’s your time.”

Those words from Jack and the guidance from other amazing Board Members at the PNGA and Washington Golf have given me the confidence to do the best I can for the associations, and ultimately providing me a dream job. Jack continued to give me guidance and words of wisdom all the way to the end.

Jack was also a lifelong amateur golf champion. His father introduced him to the game at the age of 10, and it became a lifelong passion for him. His natural talent and hard work earned him the Washington State Junior Championship title and set the stage for an esteemed golf career. During his high school tenure, the Everett (Wash.) High School golf team was undefeated. Jack went on to earn a full athletic scholarship to Stanford University where he earned All-America honors while playing for the men’s golf team. During his junior year, he transferred to the University of Washington to continue his pre-med studies and was part of the Husky golf team that won the Pac-8 title in 1961.

Jack spent a few decades away from state, regional, and national golf competitions to become a doctor and raise a family. However, the very moment he re-entered the competitive golf scene, he rose right to the top of the leaderboards and became a prominent amateur champion again.

During these later years of devotion to the game, it was his idea to create the PNGA Cup Matches, which will be one of his legacies to the Pacific Northwest golf community. He wanted the PNGA to have a championship that brought the four major allied associations in the Pacific Northwest together for the “Three C’s” – competition, camaraderie, and cooperation. As a PNGA Board Member, Dr. Lamey worked with us in 2006 to make the competition a reality. Nearly 15 years later, the annual Ryder Cup-style match-play competition has become one of the most coveted events at the PNGA. In 2015 we named the perpetual trophy the “Dr. Jack Lamey Cup.” And on December 10, 2019 the PNGA renamed the event in Jack’s honor – it is now officially called the “PNGA Lamey Cup.” Dr. Lamey was able to receive this information before his passing, and was humbled by the news.

But, the most important thing to him by far was his family. He and his wife Yvonne loved spending time with their large and crazy family. He loved everyone fiercely and unconditionally and he traveled near and far to watch his grandkids compete and perform. Whether it was soccer, basketball, lacrosse, theater or mock trial, he was there.

He will be missed dearly! I have been fortunate to be part of the PNGA family for 20 years now, and I will always remember the warm welcome Dr. Lamey gave to me in 1999. Even though he has now left us, I will continue to look to him for guidance, just in a different way now.

Rest in peace, Dr. Jack. I know we will meet again someday.