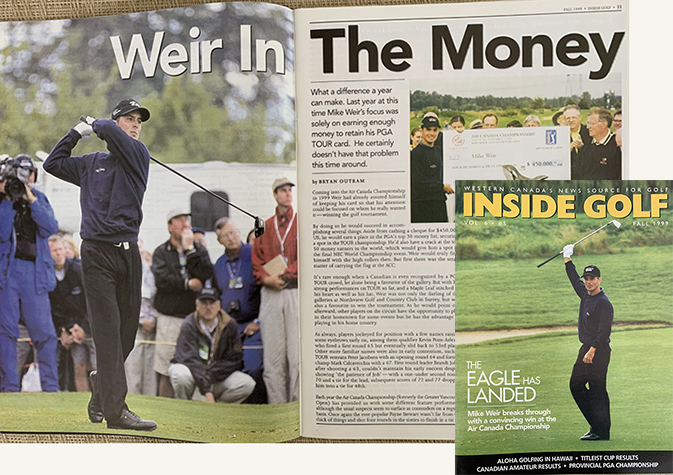 Mike Weir is too excited about the future to spend a lot of time dwelling on the past, but he’s more than happy to do a little reminiscing about his first PGA TOUR win 20 years ago.

Yes, it really has been two decades since Weir thrilled golf fans with his Air Canada Championship victory at Northview Golf Club in Surrey. If you were there, you will never forget it. Weir certainly hasn’t, although he has a hard time wrapping his head around the fact that it has been 20 years.

It was Sept. 5, 1999 when Weir recorded his second straight seven-under 64 to beat American Fred Funk by two shots and get that elusive first PGA TOUR win.

“What stands out the most for me was that it was my first PGA TOUR win and that always comes with a lot of excitement,” Weir told British Columbia Golf in a telephone interview. “And to have it happen in Canada was like a dream.”

The shot that everyone remembers that Sunday afternoon was Weir’s approach on the par 4 14th hole on Northview’s Ridge course. Weir took the lead for good when he holed an 8-iron from 159 yards in the first cut of the left rough for an eagle. When his ball dropped into the hole, Weir tossed his club into the air and raised both arms skyward.

The huge gallery following Weir that final day exploded with a roar that reverberated around the golf course. Weir said he and caddie Brennan Little actually joked about holing the shot while discussing club selection. “I had hit a number of really good iron shots that day and I remember saying something along the lines of, ‘wouldn’t this be a good time to make one.’ We kind of laughed and sure enough, I holed that one. 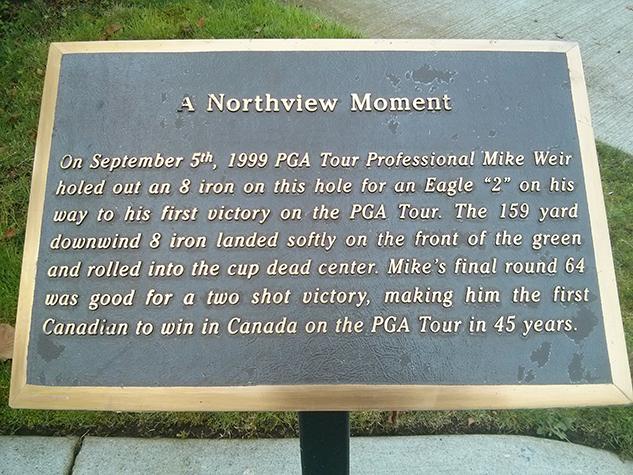 Weir was willed to the finish line by fans who lined the fairways of the remaining holes. He has never forgotten the tremendous support he received that day. “It was incredible,” Weir said. “The fans were amazing. Of course, all the Canadians got great support, but when I got into contention it just got amped really high and it was really a fun atmosphere to be a part of. It was really cool.”

The win followed a couple of close calls by Weir earlier that summer. He had finished solo second at the Western Open in Chicago in July and in August shared the lead with Tiger Woods heading into the final round of the PGA Championship at Medinah Country Club in suburban Chicago.

Despite a disappointing final round 80, it was clear that Weir was ready to break through and win his first PGA TOUR event. He opened the Air Canada Championship with rounds of 68 and 70 before catching fire on the weekend. “I remember not getting much out of my first couple of rounds there and I just kept telling myself,'stay patient because you are hitting it well and some of these putts will drop,'” he said.

“And sure enough, I got on a nice little roll on Saturday that kind of got me going and it carried on right into Sunday.”

That final round at Northview was played on a blustery late-summer day. There were intermittent showers all day, but the sun broke through just as Weir began his walk up the 18th fairway. “With the weather kind of coming in and changing and the big grandstand on 18, it almost felt like an Open Championship with how loud everyone was,” Weir says.

That win was the high-water mark of the tournament’s seven-year run at Northview. It came in the first year of Air Canada’s title sponsorship and gave the event some serious momentum. “Mike winning was the highlight of that tournament, I don’t think there is any question about that,” says Mike Carroll, a Vancouver lawyer and past Golf Canada president who served as tournament director. “Of all the things that happened on the golf side, that was the crowning moment for the tournament.”

Sadly, the tournament was lost three years later when Air Canada, struggling financially at the time, did not renew its title sponsorship. “I think everyone was disappointed Air Canada couldn’t keep it going,” Weir said. “I thought it was a real success and could have been a real building block for golf in Western Canada if we could have kept the PGA TOUR out there long term. The players were definitely disappointed. Everyone loved coming up there.”

Weir, of course, went on to register bigger victories than that first one at Northview. Just more than a year later, he won a World Golf Championship event at Valderrama in Spain. A year after that, he captured the Tour Championship and, of course, in 2003 he slipped on a green jacket after winning The Masters. 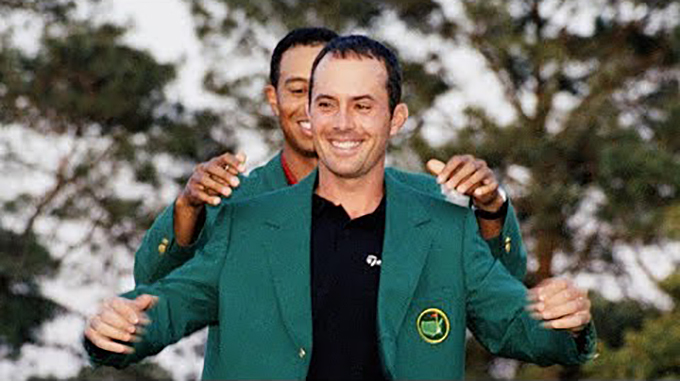 Weir collected eight PGA TOUR wins and the first one at Northview will always hold a special place in his heart. “There’s no question about that,” he said.

Weir is 49 now and you know what that means. He is counting the days until his 50th birthday -- May 12 -- when he becomes eligible to play on the PGA Tour Champions circuit.

After many years of struggles, Weir’s game has shown signs of life this year. He recently made the cut at the season-ending Wyndham Championship and has missed a number of cuts by a single shot on both the PGA and Korn Ferry Tours.

“I am feeling good about my game,” he said. “I have played well enough to be well inside the cut line most weeks. My short game has not been as strong as it normally is. I have spent so much time getting out of the bad habits through injuries and things that I have done and now for the most part I hit the ball pretty well.

"Everyone is going to have their off week here and there, but for the most part I am playing good golf almost every week. But my short game surprisingly has kind of let me down this year.”

Weir acknowledges he is more than a little excited about the next phase of his golfing life and the opportunity to compete against some of his former peers on the Champions Tour. “That is where my attention is now and looking at turning 50, that is where my attention is going to be the next several months. I really want to sharpen up my game to get ready for the Champions Tour.

“I am very excited to get a chance to play with a lot of the guys I played with for most of my professional golf career. The game has changed quite a bit in recent years and that game (on the PGA Tour Champions) will be a little more familiar to me and probably suit my game a little bit better.”