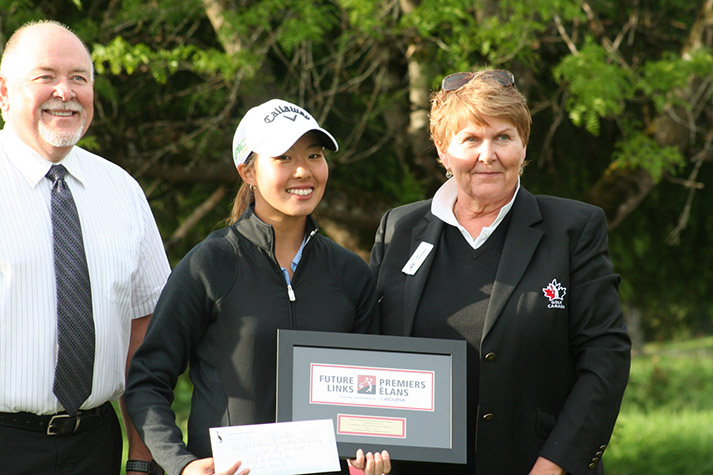 She played with confidence, never got rattled and did not make a single bogey all day. Lauren Kim was the epitome of calm, cool and collected. Did we mention she is only 13 years old and just finishing Grade 8?

The Surrey resident, who grew up on her parents’ driving range, played like a wily veteran as she bested a field that included many of Canada’s top junior golfers and won the Future Links, driven by Acura Pacific Championship at Pitt Meadows Golf Club.

Kim played a near flawless round Sunday as she carded a two-under par 70 to finish the 54-hole event at six-under par. She held off Coquitlam’s Euna Han by a single shot.

Kim began the day with a two-shot lead after firing a tournament best five-under 67 in Saturday’s second round. She appeared to sleep on that lead just fine and did not display any nerves as she hung onto it all day Sunday.
“I was a bit nervous at the beginning, but they weren’t nerves that were going to bring me down,” Kim said. “I used that energy to help me play better and score.”

No one who has been paying attention to this young woman’s accomplishments should have been surprised. Kim served notice last summer when, at age 12, she held her own in a couple of big events. She made the cut at the Canadian Women’s Amateur Championship at Marine Drive Golf Club in Vancouver and then finished 11th at the Canadian Junior Girls Championship at Beach Grove Golf Club in Tsawwassen.

Those were her first big events against much older competition and Kim said Sunday she learned a lot from that experience. “It definitely helped me,” she said. “Last year I had a lot more nerves playing with older players. But that experience taught me I just needed to keep calm and just play my game.”

Her game appears rock solid. Kim just hit fairways and greens all day. And the odd time she did get in trouble, she played her way out of it. “I am pretty proud of myself,” said Kim, who attends Earl Marriott Secondary. “On No. 6, I hit it under a tree with my drive and I thought oh, no, this is going to be a bogey hole because it’s a long hole anyway. So I punched out and then my third shot I was still 130 yards away. I said this better get close and it did. I hit it six feet away and I made the putt. I was very happy about that.”

Kim beat a field that included a number of accomplished and much more experienced players. All five members of Canada’s national junior team were in the field, including reigning Canadian Junior Girls champion Celeste Dao, who recently qualified for next month’s U.S. Women’s Open. “I am just really proud of myself for hanging in there,” Kim said. “There were a lot of strong players. I am really happy I got to play with really good players. It helps me to see where I am.”

Kim’s parents own and operate the Peace Arch Driving Range on the corner of 172nd Street and 8th Avenue in south Surrey. The range has been in the family for more than 30 years and Lauren hit plenty of balls there growing up.
“She was out there hitting balls as soon as she could walk,” said her dad Kevin. “But it was always just to fool around and hit balls. It wasn’t until she was 10 and made it to the regional finals of the Drive, Chip and Putt competition that she said I want to play.” 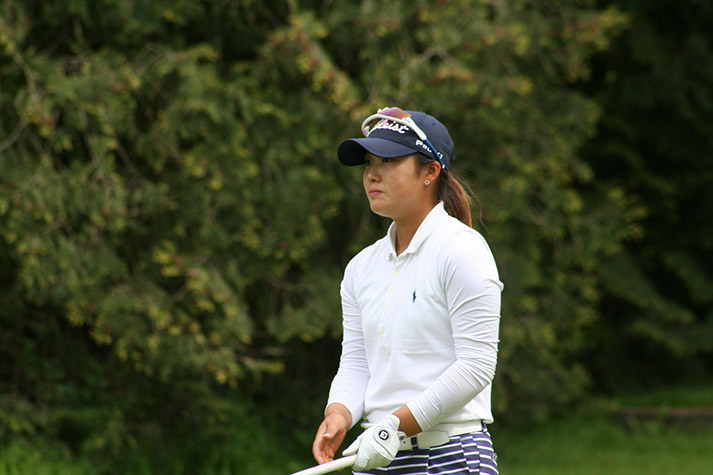 Kim had stretched her lead to four shots part way through Sunday’s final round, but Han cut the lead to two shots with a birdie at the par 3 16th hole. Both players made par on the 17th. On the par 5 18th hole, Han put her second shot on the front of the green. Kim had to lay up with her second shot and put her third about 20 feet away.

Han’s eagle try just missed the hole. “I knew I had to make it and I thought it was in, 100 per cent,” Han said. “But it was a little low to the left.” Han tapped in for birdie to move to five-under for the tournament, but Kim two-putted for her par and the win.

Three other British Columbians rounded out the top five. Victoria Liu of Vancouver was third at three-under par, Tiffany Kong of Vancouver finished fourth at even-par and Angel Lin of Surrey was fifth at one-over par.