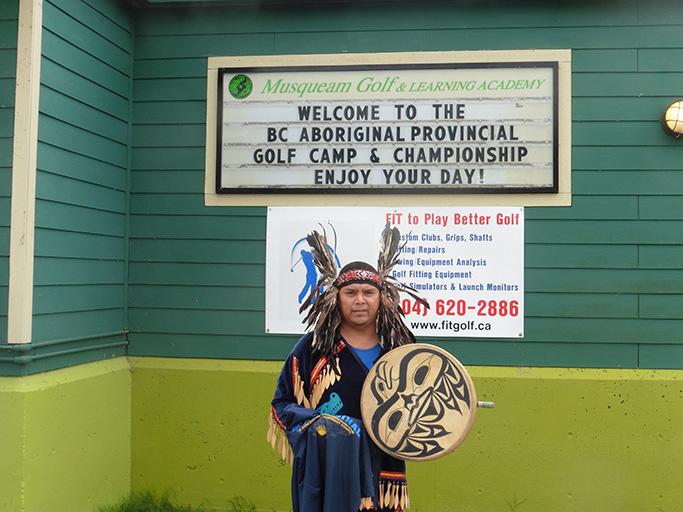 It was a beautiful Thursday morning at the Musqueam Golf & Learning Centre in South Vancouver and while golfers worked on their games, Alec Dan was clad in traditional Musqueam attire .

Dan was greeting 11 young golfers to the BC Aboriginal Provincial Golf Camp & Championships and performed a traditional Musqueam welcoming song.

“We are very happy to have you come to our territory and learn about the great game of golf,” said Dan. “Our hope is that you youngsters have fun and enjoy yourself here and maybe you take up the game of golf in the future. The most important thing is to have fun.”

The two-day event, put on by The Aboriginal Sport, Recreation & Physical Activity Partners Council and hosted by the Musqueam First Nation, saw kids come from as far as Kamloops to work with Musqueam Class A Professional Paul Skrudland.

“Our focus this year was to get more Aboriginal youth who have never tried golf to come and give it a try,” said Lara Mussell Savage, Manager, Sport Development & Competitions for the  Aboriginal Sport, Recreation and Physical Activity Partners Council. “We have put a large focus on skills development this year and we are happy to have so many brand new golfers here.”

Mussell Savage said identifying potential Team BC members for the 2017 North American Indigenous Games in Toronto is still a part of this camp, but this year’s camp will serve as preparation for golfers who hope to impress during the 2016 Team BC selection processes.

“This combined camp and championships provides a great opportunity for youth born 1998 through 2003 who are interested in pursuing Team BC for the Toronto 2017 North American Indigenous Games (NAIG) to develop and better prepare for the Team BC selection processes to be held next summer at the 2016 BC Aboriginal Golf Championships,” said Mussell Savage.

One young golfer who is on Mussell Savage’s radar is 15-year-old Tyson Draney of Kamloops, who came with his father Darrell. “I’ve been golfing for three years and I’ve had a lot of fun playing the sport,” said Tyson. “I would love to be a part of Team BC, but I know I have to work on my putting and my driver is sometimes 'iffy'. I am pretty good with my chipping and my irons.”

The smooth-hitting lefty was getting some specialized teaching from Skrudland, who videotaped Tyson’s swing and showed the youngster how he could improve it. “You have a long swing and it’s in a good position,” said Skrudland. “Your (club) face is closed so we can try and work on getting it open more often.”

“That’s pretty cool to see your swing in slow motion,” said Tyson. “I know I have to get better, spend more time practicing and that’s what I’m going to do when I go home.”

Skrudland was also utilizing Tyson as a mentor for the other 10 kids in the camp, as many of them haven’t held a golf club, let alone hit it prior to this camp.

Sisters Maddy and Chloey Jasper-Piché are originally from Saskatchewan and now attend school in Surrey. Their dad heard about the camp and the girls were eager to give it a try. “I’m having a lot of fun,” said 9-year-old Chloey. “I also play soccer and I swim and it’s good to try out a new sport.”

Maddy, two years older, said she plays soccer and basketball as well and golf has been good, especially since she can learn it alongside her sister. “We get to spend time together and we’re meeting some new people here,” said Maddy.

The camp does have a competitive component, as the second day features a full round of golf and medals to the best finishers. But for most of the two days, it’s about fundamentals.

Skrudland teaches the kids about interlocking and overlapping grips, stretching exercises for before and after golf, how to chip and putt and golf rules and etiquette. Skrudland also accompanied them out on the executive length Musqueam course for a practice round.

The kids also get a lesson in nutrition, as their snacks include healthy fresh fruit and bottles of water. “We want the kids to see that golf is a game you can play for life,” said Skrudland. “I’ve been trying to organize a camp like this at Musqueam for some time, so that’s why I was so happy to get involved in this camp. Golf can be an intimidating sport to pick up, with the ball being small and clubs not always being available.”

Skrudland knew about half the kids because they are part of the Musqueam Nation, but he was happy to get to know the other kids. “Getting kids from other bands involved is good for the future,” said Skrudland. “If we can give them some fundamentals and get them interested in the game now, maybe they’ll want to continue with golf.”

While there was originally a $40 fee to register for the camp, financial support from sponsors and partners meant that fee was waived for all 11 camp participants. “The Musquem Nation have been great hosts,” said Mussell Savage. “We were very happy that Alec Dan was able to welcome the kids to this event because we wanted the kids to understand there’s a cultural element to this camp.”

The camp concluded on Friday afternoon with an awards lunch and ceremony at the Musqueam Community Centre.