Canadians Aiming To Get Into U.S. Open At Chambers Bay

It Remains To Be Seen Whether There Will Be Any Canadian Flags Flying At Chambers Bay For The 2015 U.S. Open

Currently, there are no Canadians scheduled to be amongst the 156 players who will tee it up at Chambers Bay starting June 18.

But come June 8, in what is termed the Longest Day in Golf, at least 22 Canadians will try to overcome their final obstacle, a 36-hole qualifier being played at 10 sites all across America, to get one of the final spots in the U.S. Open.

The U.S. Open is the most egalitarian of the 4 Majors, as any player, professional or amateur, with a handicap index of 1.4 or less can slap down their entry fee and try to make it through local and sectional qualifying.

As of May 26, there were only 74 players who were exempt into the tournament, including former U.S. Open champions of the last 10 years, the last five years of other Major champions and all players in the Top 60 of the Official World Golf Rankings as of May 25.

There were also 16 qualifiers out of two international sectional qualifiers, held in Japan and England on May 25. With 90 of the 156 spots in the U.S. Open spoken for, that means there’s only a maximum of 66 spots available in the 10 sectional qualifiers to be held June 8 all throughout the United States.

The six Canadians with the best chance to qualify for Chambers Bay certainly have the pedigree, as they are all regulars on the PGA TOUR.

Ontario’s David Hearn and Mike Weir, along with Saskatchewan’s Graham DeLaet, join BC products Nick Taylor, Roger Sloan and Adam Hadwin as players who didn’t have to go through local qualifying.

That’s because these venues are the closest qualifiers to The Memorial Tournament at Muirfield Village, which hosts the PGA TOUR event which ends on June 7, and traditionally have the most qualifying spots in to the U.S. Open because of the depth of the field.

For British Columbia golfers Cory Renfrew and James Lepp, the natural place for them to play their way to the U.S. Open is located two hours east of Chambers Bay, at the Tumble Creek Club in Cle Elum, WA. 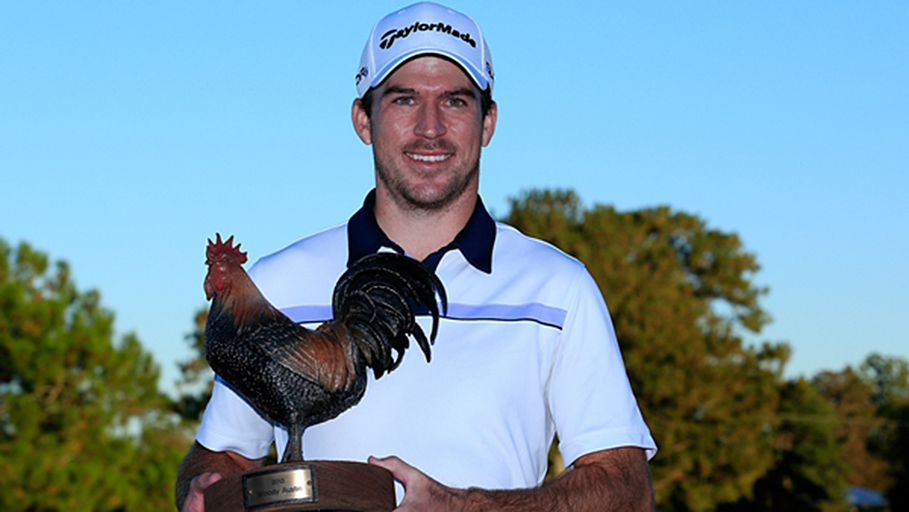 Abbotsford's Nick Taylor Was The Low Amateur In The 2009 U.S. Open At Bethpage Black In New York. He Has Since Turned Pro And Has A PGA TOUR Win Under His Belt. But He Still Hasn't Punched His Ticket To This Year's Championship At Chambers Bay In The Pacific Northwest

Renfrew has the added complication of competing on PGA TOUR Canada, which will complete its Victoria stop, at Uplands on Sunday, June 7, meaning Renfrew and the other players scheduled to play at Tumble Creek will have to ferry over from Victoria and then drive six hours to get to Cle Elum for their early morning Monday tee times.

Renfrew, a proud Cordova Bay product, who’s had a nice run this year on the Gateway Mini Tour in Arizona, also Monday qualified for the Waste Management Phoenix Open in February, making the cut and cashing a cheque for over $14,000 for his efforts. He got through local qualifying with a 66 at the Duke University Golf Club in Durham, NC.

Lepp, the owner of Kikkor Golf, which specializes in lifestyle golf shoes and clothing, shot an even-par round of 72 at The Home Course in DuPont, WA to get himself into a 7-for-2 playoff, where he birdied the first hole to earn his spot into sectional qualifying.

Lepp, an Abbotsford native, who had a distinguished college career at Washington, winning the 2005 NCAA Championship, had given up professional golf in favour of his burgeoning business, but has clearly kept his game in shape and will be looking to play his way into the U.S. Open mere miles from where he tasted college success.

Another Western Canadian, Mitchell Fox of the Cottonwood Golf Club in Calgary, shot a 67 in Missoula, MON, to earn his spot into sectional qualifiers. Fox, who was unsuccessful in Monday qualifying for the PC Financial Open at Point Grey, was spending the two weeks prior to June 8 working on his game back at his home course, Cottonwood, in Calgary, before heading down to Tumble Creek.

It’s there where the other 13 Canadians who played their way through local qualifiers will try to earn their spot into the U.S. Open.

The luckiest place for Canadian golfers was the Country Club of Detroit, where Canucks Drew Nesbitt of Shanty Bay, ON, Brett Nymeyer of Stratford, ON and Michael Gligic of Burlington, ON earned three of the five spots available at that site. Gligic will be playing his sectional at Tumble Creek because he is also playing on PGA TOUR Canada.

Two Canadian amateurs, Evan Degrazia and Michael Blair, also qualified for sectionals, with Degrazia’s even-par 72 in Ramsey MN good enough to get through while Blair’s 67 at Eagle Eye Golf Club in East Lansing, MI good enough to be medallist at that qualifier.

There are also seven Canadians who are alternates into the sectionals, as Daniel Gosselin, Alexander Meagher, Mark Coldham, Nicholas Brisebois, Robbie Greenwell, Christopher Ross and Ryan Zylstra will need some luck to get into one of the 10 sectional qualifiers.